De León plows ahead in ‘very steep’ challenge to Feinstein 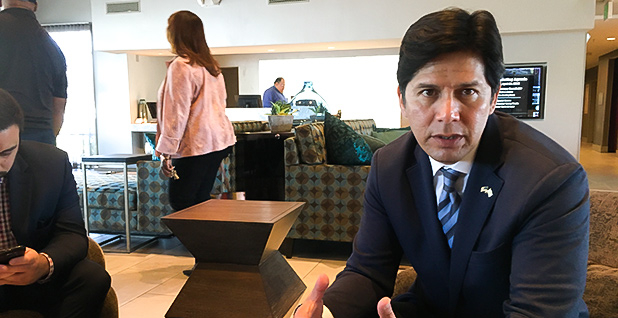 His biggest donors are the Emerson Collective, Laurene Powell Jobs’ progressive nonprofit, and the Cordoba Corp., a construction company that specializes in municipal projects, according to the Center for Responsive Politics.

"He is going to come in second in the primary," said R.L. Miller, chair of the state Democratic Party’s environmental caucus. "Kevin is putting together an extraordinary coalition that does not remind me of Bernie Sanders and Hillary Clinton. This is not 2016, this is 2008. It looks a lot like the Obama coalition."

But he faces extreme odds against Feinstein, 84, who has steadily increased her margin of victory in each of her four previous campaigns and by the end of March had a war chest of $10.3 million to de León’s $672,000.

"In politics, you never say never, but the odds that he will be the next U.S. senator from California are minimal," said Darry Sragow, a former Democratic strategist who now publishes a political reference compendium, the "California Target Book," and serves as a political science professor at the University of Southern California. "It’s a huge mountain, a very steep mountain to have to climb."

KDL, as he’s known in Sacramento, is coming off a four-year tenure as president of the state Senate and a 12-year career in the state Legislature, where he has been one of the top lawmakers on green issues.

Among his top green achievements, he helped wrangle votes for Gov. Jerry Brown’s (D) extension of the state’s greenhouse gas targets and cap-and-trade market through 2030 and the state’s first gas tax increase in 23 years.

He also wrote laws that increased renewable electricity mandates and reserved billions of dollars for low-income residents from the state’s greenhouse gas market, as well as a bill to create a state-run retirement savings plan, which will take effect next year.

He says he’ll sponsor a renewable portfolio standard in the Senate and advance other proposals to replicate "California values," including universal health care.

"We have proven in California that it’s achievable," he said. "If it works here, why can’t it be done in other states that are fossil fuel states?

"The new challenge is the national level, and it’s time that we export California values to Washington, not the other way around," he added.

Like other statewide candidates this year, de León is using progressives’ fear of President Trump as a springboard. He touts his 2017 bill, S.B. 54, which has drawn the Trump administration’s ire for its ban on local officials’ helping the federal government enforce immigration laws.

De León points out that Feinstein passed her Desert Protection Act and first assault weapons ban when she was a freshman senator. "Congressional seniority means nothing if you don’t use it," he answered when asked at Rossmoor about the value of Feinstein’s clout.

De León isn’t citing Feinstein’s age as a liability, but voters in Rossmoor are raising it. "I wish Dianne Feinstein had said, ‘I’m in my 80s; I’m going to step down,’" said Ware.

De León also downplayed her seniority in light of key fights with the Trump administration, saying, "I don’t think seniority has helped us when you have to convince the senior senator in California not to confirm [Attorney General] Jeff Sessions."

Trump is de León’s biggest cudgel against Feinstein, particularly given her statement last August that Trump could eventually "be a good president."

‘An investment in the future’?

California’s top-two nonpartisan primary, instituted in 2012, has encouraged more internecine congressional battles, but there is still a strong tradition of waiting one’s turn.

De León had been talked about as a candidate for governor; instead, two months after Feinstein’s Trump remark last year, he entered the Senate race. His strategy against Feinstein is to get into the general election, which will give him a much larger media platform than he can currently afford. "Once we get into the runoff, that changes the complexity of this debate," he said.

But he has carved out a steep path. "As a very practical matter, if you’re a major contributor to Democrats, you’re going to think long and hard before you contribute to someone who’s trying to take out Dianne Feinstein," Sragow said.

Some observers say de León skipped this year’s gubernatorial race out of allegiance to former Los Angeles Mayor Antonio Villaraigosa (D), who declared his candidacy in 2016 and is battling Republicans John Cox and Travis Allen for second place in next month’s primary behind current front-runner Lt. Gov. Gavin Newsom (D).

De León conceded that Villaraigosa’s candidacy may have been a factor. "If he was not in the race, that would change the dynamic altogether," he said. "I would never rule out running for governor in the future."

That comports with political experts’ takes. "He’s a thoughtful, deliberate political figure, and there’s every reason to think that he has a good long-term political future in California," Sragow said. "So while he certainly can never admit this and his campaign crew can never admit this, the most likely scenario here is his race for U.S. Senate in 2018 is an investment in his future. It’s increasing his name recognition around the state, and that makes a lot of sense."

How he will perform in next month’s primary is hard to predict. Polling can only go so far in a contest of 31 mostly unknown candidates.

Pollsters had started with the assumption that de León would make it through the primary and pitted him only against Feinstein until an online poll last month measured him against all the other candidates on the ballot and found him tied with one of the 11 Republicans, James Bradley, at 11 percent and 10 percent, respectively, to Feinstein’s 28 percent.

"It’s totally unclear whether he can get into the top two," Sragow said. "The de León dream is the Republican voters don’t know what to do, and they get spread so thinly that Kevin comes in second."

Most people in California just aren’t that interested in politics, polling shows, which means they will rely mostly on name recognition when voting. Being well-known in Sacramento is not the same thing as being known to the state’s 40 million residents, perhaps 5 million of whom will cast a vote in this year’s primary.

"He’s one of many, many names that people have to sift through to find," said Andrew Acosta, a Democratic campaign consultant in Sacramento. "Most people who are Dems will look at Feinstein and say, ‘OK, I got it, move on to the next race.’"

De León does have the endorsement of Democratic financier Tom Steyer, whom he is close to and who had been mulling a campaign himself. He also has endorsements from half of the San Francisco Board of Supervisors, the mayor of Berkeley and the Bay Area chapter of environmental campaigner Bill McKibben’s political action committee, 350 Action.

"I’m getting a lot more support than people think," he said. But he said he didn’t know whether it would translate into campaign donations. "All I know is, it’s drought season in California, so I hope it rains."