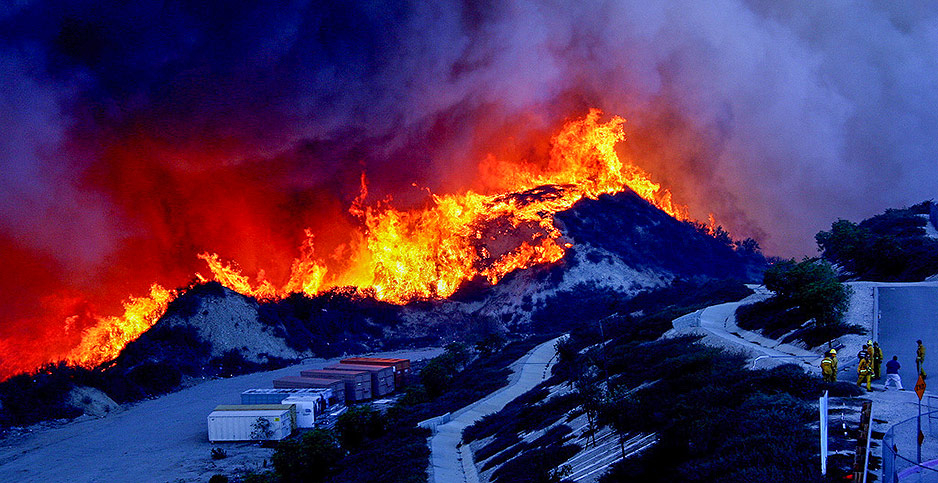 California wildfires are getting worse because of climate change and as more homes are being built in the woods. Erick Pleitez/Flickr

Half of the most destructive wildfires in California history erupted in the last two decades. Half of the deadliest ones did, as well.

Lethal blazes north of San Francisco last month rank together as the nation’s costliest firestorm, with insurance claims of $3.2 billion and likely to grow.

It’s a new era, with California blazes burning hotter, moving faster and finding more fuel to devour, according to experts. And climate change plays a role.

Rising temperatures exacerbate droughts and dry out trees and grasses. Even when it rains in the winter, hotter conditions diminish the soil’s ability to absorb moisture, a new federal analysis says. It’s a problem across the West and up through the northern timberlands to Alaska.

The number of large forest fires is "projected to further increase in those regions as the climate warms, with profound changes to certain ecosystems," said a report by the U.S. Global Change Research Program.

California forecasts that it will see more fires in years ahead, saying in its newest state budget that "climate change has and will continue to lengthen the fire season."

The nation’s most populous state has made multiple changes to its policies because of that outlook, such as restricting the kinds of building materials used in at-risk areas and requiring people to keep more "defensible space" around their homes. The state has increased the number of firefighters and trucks it keeps on duty year-round. California just allocated $220 million for fire prevention, using proceeds from its cap-and-trade program for carbon emissions.

Yet as multiple teams work to pinpoint the cause of the Northern California firestorm, experts say changes are needed to lower risks. The fires exposed gaps in planning for fire-prone areas, said Max Moritz, fire specialist with the University of California’s Cooperative Extension.

"If we’re going to have more fires, and more severe fires in the future — and a lot of people anticipate that’s a very real possibility — it means we have to learn to coexist with fire," he said in an interview. "We have to assume and accommodate these types of fires as natural events. That means being much more careful, much more deliberate about where and how we build our communities."

Municipalities that approve projects at the wildland border often fail to prepare financially for fire damages. The state picks up much of the costs of replacing destroyed public infrastructure and, increasingly, for firefighting, Jones said. He called it a "disconnect" between "who makes decisions and who bears the costs of those decisions."

Rising fire insurance rates might theoretically discourage living in hazardous areas, but "you’ve really got to start at the front end, and significantly improve how we make decisions about where new homes are going to be put and make sure that the cost of those risks are internalized into the decision, or the decisionmakers bear some liability for that decision, too, so they think twice about doing it," Jones said in an interview.

The Tubbs Fire that burned in and around Napa last month consumed 5,643 structures as it raced across 36,807 acres. It killed 21 people, making it the third-deadliest fire in state history.

A fire in 1964, in the same area of Santa Rosa, burned almost the same footprint and no one was killed, said Jon Keeley, a fire ecologist with the U.S. Geological Survey. He said an earlier fire — known as the Hanley Fire — destroyed 29 homes. Other estimates put the total number of destroyed structures at as high as 156. That’s far lower than last month’s fire.

"What’s different today is 50 years later there’s five times more people in the path of that fire," Keeley said. "The population growth has expanded enormously, and what it’s done is, it’s not only increased the possibility of an ignition … it’s put a lot of people in areas that are close to dangerous watersheds and corridors of wind."

The upscale Santa Rosa development of Fountain Grove was built in the same area where the Hanley Fire burned. Construction on it spanned from the late 1980s into the early 2000s. It was largely wiped out by the October fire.

"It’s a mistake to say that these fires were different in their behavior from past fires — they were not," Keeley said. "It is definitely true the impact on people was very different."

California has mapped dangerous areas for wildfires, and it has put stricter building codes in high-risk regions. That’s an important step, Moritz said. But state maps in the fire hazard severity zone fail to include extreme weather patterns, such as hot and dry winds linked to the state’s most destructive wildfires. The technology exists to include that information, he said.

David Sapsis, wildland fire scientist at the California Department of Forestry and Fire Protection, known as Cal Fire, said the state is working to develop "area-specific wind and dryness regimes" to incorporate into revised fire maps slated for development next year.

He added that "we already have compiled a fine-scale 13-year fire climatology and will be working on extending that data record and using it to define key areas where these wind phenomena are most likely to occur."

The maps, when adopted by local governments, trigger "minimum standards for fire prevention," such as defensible space around structures, and "ignition-resistant" new buildings, Sapsis said.

Legislation passed in 2012 gave state fire officials a role in advising municipal leaders in high-risk areas and places where the state has responsibility for fighting fires. However, they can only offer suggestions and don’t have a vote on developments.

Meanwhile, one local official has raised questions about putting homes back in Fountain Grove.

"I hesitate to even suggest this, but many people are starting to say, why are we — and this is in the city’s realm — why are we thinking about permitting the rebuilding of Fountain Grove?" Sonoma County Supervisor Susan Gorin told The Press Democrat in Santa Rosa. Gorin did not respond to requests to talk further about replacing homes in Fountain Grove.

Keeley disputed that the Santa Rosa fire was climate-related. Houses in one of the hardest-hit neighborhoods were a mile from the nearest open vegetation, he said, pointing to high winds as a key accelerant.

"When you had winds like what we had, it’s really hard to see any other outcome than a disaster like this," Keeley said.

Others said climate-related factors had an impact in the recent fires. Janet Upton, spokeswoman at Cal Fire, said while it’s true that winds powered the Tubbs Fire at first, "when winds died down after the first 12 hours, we still had a fight on our hands" — because the brush, trees and grasses were so dry, they burned very hot. Low moisture in that growth leads to "explosive or critical fire behavior," she said. Those dry trees also "put off embers the wind carries forward."

Firefighters have a hard time getting in front of it, she said. In Napa and Sonoma, they used vineyards as key fire breaks because of their higher moisture content.

"We’re certainly seeing changes in weather patterns that are creating longer fire season conditions, burning conditions," he said. Vegetation is changing, and "we’re seeing more flammable types of vegetation." Some areas that had trees are now covered by brush.

Cities and counties have an incentive to allow new subdivisions near wildlands, as those municipalities want more residents in order to boost the tax base, said Laurie Wayburn, president of the Pacific Forest Trust, a think tank on forest conservation and climate policy.

Jones said it’s not so much the desire for new property taxes as that "communities want more amenities; they want growth." He said they want new homes and ideally more expensive houses, because those attract business.

With new developments, Jones said, "it’s bad enough that the cost of decisions are not internalized by decisionmakers. There also are incentives to expand and grow."

The state Legislature might need to limit building in dangerous areas rather than letting local municipalities make those decisions, said Ethan Elkind, director of the Climate Program at the University of California, Berkeley, Center for Law, Energy & the Environment.

"We don’t want to rely on a checkerboard pattern," where one city does well while its neighbor doesn’t, he said.

The state, for example, could stop funding new highways and roads that lead to homes in riskier areas, Elkind said.

"It’s primarily transportation that really drives the real estate development," he added. "You look at what drives sprawl, it’s the automobile and automobile-related infrastructure."

The state could also flex its influence on privately funded toll roads. "There’s a public permitting process for those toll roads," he said.

Jones, who was in the state Assembly from 2004 to 2010, offered legislation in 2009 to require cities and counties to show they had fire resources on hand before approving new developments. Former Gov. Arnold Schwarzenegger (R) vetoed it, saying, "[T]his bill would place an increased workload on the State without additional staff or other resources to meet the workload. Without funding to ensure this bill can be implemented, this piece of legislation cannot help prevent wildfires in our State."

Jones said: "It’s a hard conversation to have because you’ve got an entire industry that is built up around this growth. And you have local governments who don’t want to be told what to do, and so it’s challenging.

"If we know that climate change is going to continue despite our best efforts, and that means we’re going to see more extreme weather, we need to think long and hard about whether it makes sense to keep putting people in harm’s way," Jones added. "And that’s a conversation we’re not having."

In earlier years, she said, firefighters worked in the summer and went to school in the fall and winter. Until recently, there were 10 crews that worked year-round, located in Southern California. Gov. Jerry Brown (D) in the fiscal 2016-17 budget allocated $42 million to add 42 engines to the year-round staffing. Now Cal Fire has 52 year-round crews.

Those firefighters, when not battling blazes, work on clearing dead brush and other fire fuel. In a state with 39 million people using cars, lawn mowers, power tools and other equipment, all of which can spark fires, "if we don’t start investing in prevention, in forest health, we’re never going to break the cycle," Upton said.

The state has made other changes to cope with rising fire risks, including a requirement to expand defensible space around homes from 30 to 100 feet. Creating that space can cost tens of thousands of dollars on one parcel, however, and some residents who are surrounded by trees say they can’t comply.

Cal Fire inspectors have a goal of visiting 250,000 homes this fiscal year to check on compliance. Officials cite the fact that 95 percent of wildfires in the state are contained at less than 10 acres as evidence that defensible space works (Greenwire, Nov. 6).

The long-standing practice of suppressing fires in California has left more to burn when blazes erupt, said Wayburn with Pacific Forest Trust. That’s a policy that’s now starting to change at the state level.

"We simply suppress fires for so long that when they happen, they’re the really big fires," said Wayburn. "On some level, our management has led to these very big, catastrophic fires."