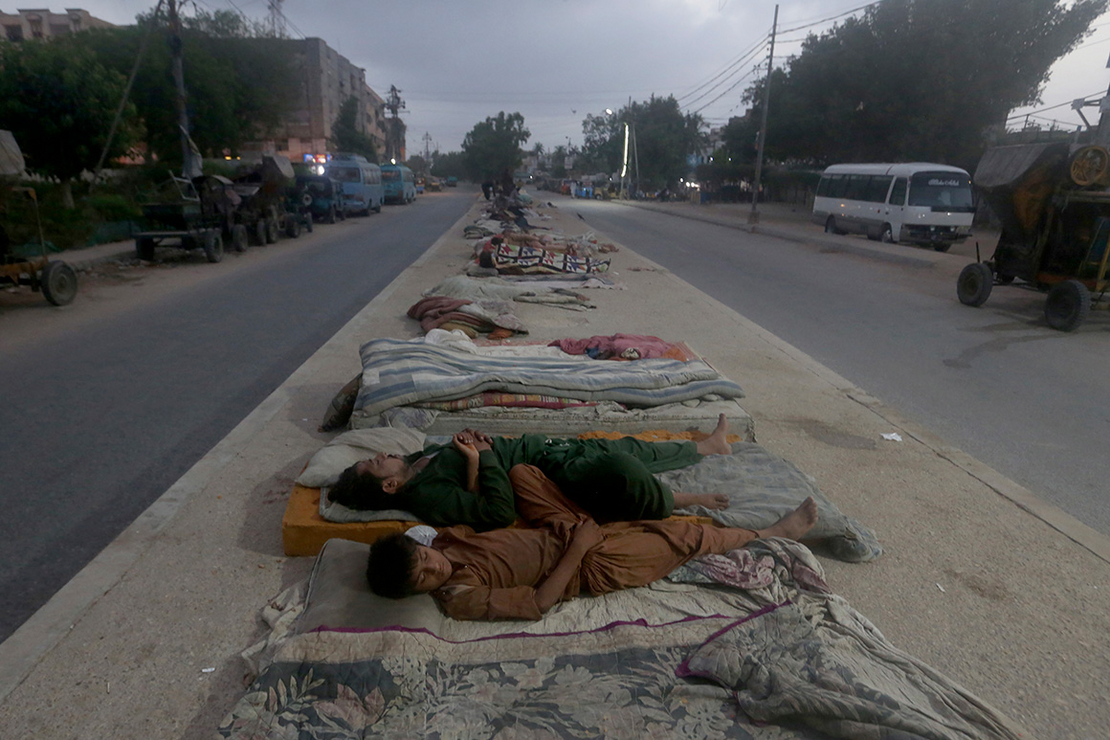 Laborers sleep on a median in Karachi, Pakistan, earlier this month. Pakistan and India are experiencing intense heat waves that scientists say are being influenced by human-caused climate change. AP Photo/Fareed Khan

A blistering heat wave in India and Pakistan last month sent temperatures soaring above 120 degrees Fahrenheit, all before the summer had even kicked off. Now scientists say climate change helped make the shocking weather possible.

A new analysis finds that global warming made the heat wave at least 30 times more likely to occur. The event was about 1 degree Celsius, or 1.8 F, hotter than it would have been in a world without climate change.

Without the influence of global warming, “this event was highly, highly unlikely,” study co-author Arpita Mondal, a climate scientist at the Indian Institute of Technology, said at a news conference yesterday.

The findings were released by the research consortium World Weather Attribution, which specializes in attribution science — studies that investigate the links between climate change and individual weather events. Since it was founded in 2014, the group has published dozens of analyses on climate-related disasters including floods, hurricanes, droughts and extreme heat.

Earlier this month, WWA released a study of the extreme rainfall and catastrophic floods in South Africa last month, concluding that climate change made them both more likely to occur and more intense (Climatewire, May 16).

Most analyses use a standard method. They collect historical climate data from the region in question, and they run two types of simulations using climate models — one representing present day and one representing a hypothetical world without human-caused climate change. These simulations help demonstrate how warming has influenced the probability or intensity of a given event.

The recent heat wave was a prime target for investigation. Not only did the heat reach punishing extremes, it also started unusually early in the year and dragged on for weeks.

“What was particularly exceptional or particularly unusual about this heat wave was how early it started,” said study co-author Friederike Otto, a climate scientist at Imperial College London and co-lead of WWA. “It basically was hot from the beginning of March.”

The heat has been linked to at least 90 deaths across both India and Pakistan so far, and experts say that’s likely an underestimate.

WWA’s study is at least the second on this event. Last week, the U.K.’s Meteorological Office published a similar analysis, concluding that climate change made the heat wave at least 100 times more likely to occur.

That analysis used slightly different methods and relied on only one model, compared with WWA’s suite of 20. But the Met Office findings still fall within the uncertainty range of WWA’s findings — they’re not actually inconsistent with each other. In fact, because of data constraints, WWA’s estimate is likely on the conservative side.

“Both show that climate change is a real game-changer when it comes to these kinds of heat waves,” Otto said. “That is the main message to take away here.”

And it’s likely to keep getting worse.

The study underscores the importance of both adapting to rising heat and working to halt global warming as soon as possible. Many cities around the world are exploring heat action plans, including early warning systems for heat waves; cooling centers for people without access to air conditioning; and other adaptation efforts, like expanded parks and green spaces intended to bring down urban heat.