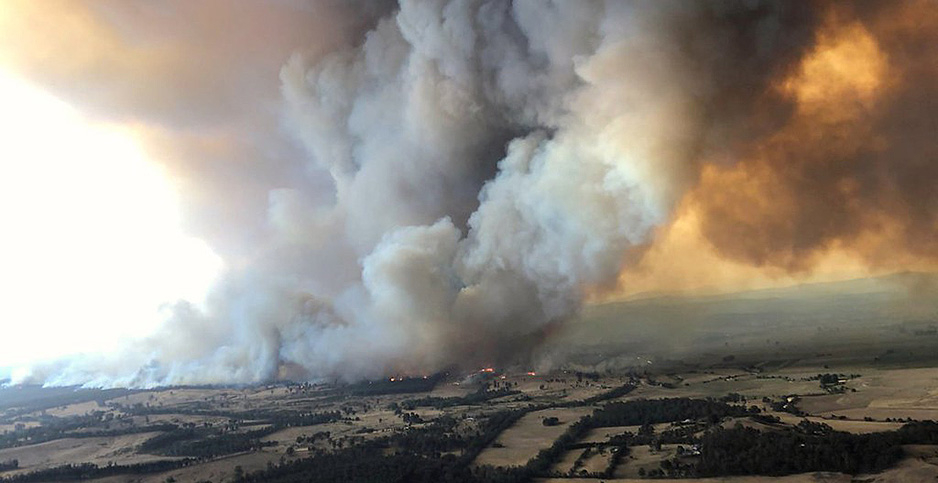 Climate change had a hand in Australia’s recent wildfires by influencing weather conditions that led to the catastrophic blazes and boosting their chances of occurring by at least 30%, and probably much more, according to scientists.

The findings released yesterday came from a field of research known as attribution science, which over the past two decades has improved to quickly pinpoint the role that climate change plays in specific disasters.

Whereas it previously might have taken researchers months to analyze an event as complex as the bush fires in Australia, the authors released the study just weeks after the blazes reached their apex.

"We know that climate change is happening, and it’s affecting people and extreme events today — so we don’t need an attribution study to know that," said co-author Friederike Otto, a climate scientist at the University of Oxford and a partner with the World Weather Attribution, a global consortium of researchers that oversaw the study. "But climate change has a very different effect on different extreme events. So to understand what that … means for where you live, you do need an event attribution study."

The study focused on a swath of southeastern Australia where the blazes were especially severe. Fires raged from September into January and burned vast stretches of the country measuring more than 25 million acres. Flames and billowing smoke killed close to 30 people and potentially 1 billion animals.

To examine the influence of climate change, the researchers used a metric known as the Fire Weather Index, which uses meteorological variables like heat and precipitation to evaluate wildfire risks.

The researchers used an ensemble of climate models, which they checked against real-life meteorological data to determine how unusual this fire season was and to what extent it was influenced by climate change. The season was exceptional in both heat and dryness. December 2019 was Australia’s hottest month on record, and 2019 was also the country’s driest year on record.

Despite those broken records, the researchers didn’t find any significant trends, or changes, in annual dry extremes over the last 100 years. But they did find a significant increase in extreme heat. According to the models, a heat wave as rare as the one that occurred in December would have been around 1 to 2 degrees Celsius lower a hundred years ago (that’s anywhere from 1.8 to 3.6 degrees Fahrenheit).

And looking at the Fire Weather Index as a whole, the researchers found that such extreme wildfire risk is at least 30% more likely today as a result of the influence of climate change.

That said, the climate models don’t perfectly represent real-life conditions scientists have observed in Australia. They tend to underestimate trends in both heat and the Fire Weather Index as a whole.

That means 30% is the minimum influence climate change had on the recent wildfires. It was likely higher.

"We can conclude that there is a lower boundary — that we know for sure that the influence of climate change on the risk of fire weather is not less than 30%," said Geert Jan van Oldenborgh, a scientist at the Royal Netherlands Meteorological Institute and the study’s lead author. "But we think it could be much higher than that 30%."

To prove that point, scientists would need to figure out exactly why there’s a discrepancy between the models and the real-life observations. And that’s an ongoing project.

"I think really the most important area of research that we need to focus on to understand better is why the models underestimate the trend in the heat in such a way as they do," Otto said.

As far as climate-related events go, wildfires are among the most difficult to analyze. That’s because they’re influenced by so many factors, from weather and climate variables to the types of vegetation on the ground to human land use and fire management practices.

Extreme heat and drought may set up the kinds of conditions that could increase the risk of an intense blaze. But a fire still needs an ignition source — typically lightning or human activity — to get started in the first place. And the rate at which the fire spreads may be heavily influenced by features of the landscape or how frequently it’s been burned in the recent past.

The new study doesn’t tackle all of these factors because they would be nearly impossible to parse out in a single analysis. It focuses mainly on climate-related influences, which is why it uses the Fire Weather Index as a symbol of wildfire risk.

That’s a reasonable way to conduct a climate attribution study on wildfires, said John Abatzoglou, a climate and wildfire expert at the University of Idaho who commented on the new study for E&E News.

"High levels of the Fire Weather Index are very well linked to extreme fires across a variety of different vegetation types globally," he said. "It’s a nice way to synthesize a sort of consortium of climate and weather factors that give rise to fire behavior."

Even so, the combination of variables that feed into wildfire risk make assessing attribution difficult. Unlike analyses of heat waves or extreme rainfall events, which focus mainly on one variable — temperature or precipitation — complex events like wildfires require more work.

This particular study was completed relatively quickly, compared with other attribution research. But it still took more time than other recent work by World Weather Attribution, which has made a name for itself by producing rapid attribution analyses.

"We knew it was going to be a tough job," van Oldenborgh said. "That’s why it took us eight weeks, rather than the normal one or two weeks."

Still, the research is a testament to scientists’ increasing ability to tackle complex climate and weather events in attribution studies. Part of the improvement is born by repetition, according to Otto. The more studies researchers complete, the faster they get at working through the methods and analyzing their results.

"We have just many different studies already done in the past with different researchers, so that we have a very clear procedure of what to do and how to do it and how to compare results," Otto said.

The new study has not yet been subjected to peer review, the researchers are careful to note. But it has been submitted to a scientific journal.

As more wildfire attribution studies come out, they may cumulatively influence the way decisionmakers approach fire management and preparation in the future, Abatzoglou suggested.

For instance, they may shed some light on how frequently a "rare" event, like the recent wildfires, may happen in the future.

Community planners often come up with infrastructure designs and disaster preparation schemes based on unlikely, but possible, events — for instance, a wildfire that’s only expected to occur once every 100 years. But as the research suggests, the 100-year event may be much more intense today than it was a few decades ago. And it may be even more severe in the future.

"We know that climate change is going to change the probability of those very low-probability, high-impact events," Abatzoglou said. "The thought is that studies like this may be able to help us modernize our view on what that 100-year, still exceedingly rare fire event may look like."