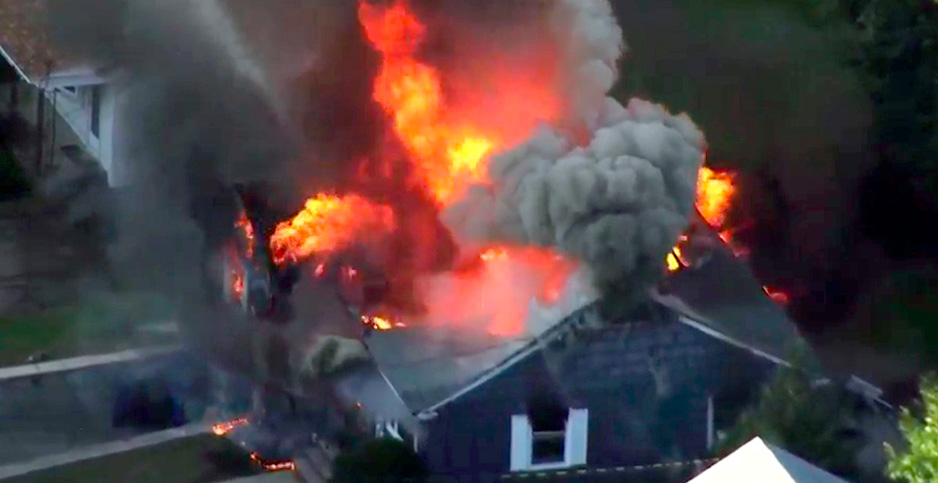 Flames consume a home in Lawrence, Mass., outside of Boston, yesterday after a series of gas explosions rocked three communities. WCVB/Associated Press

A gas explosion yesterday that destroyed dozens of buildings and killed at least one person in Massachusetts came after years of concern about the state’s aging pipeline system and amid efforts to upgrade it.

A series of rapid explosions ignited fires in 60 to 80 homes yesterday in Lawrence, Andover and North Andover, about 25 miles north of Boston, forcing the evacuation of entire neighborhoods and sending hundreds of people to hastily arranged shelters, the Associated Press reported. A teenager was killed when a chimney fell on his car, and dozens of other people were injured.

While it could take days or weeks to determine the exact cause, Columbia Gas of Massachusetts was repairing pipelines in the area shortly before the explosions started. The Massachusetts Emergency Management Agency blamed the fires on gas lines that had become over-pressurized but said investigators were still examining exactly what happened, according to AP.

The National Transportation Safety Board and the Transportation Department’s Pipeline and Hazardous Materials Safety Administration were sending teams to the scene, and the state’s two senators asked the Commerce, Science and Transportation Committee to hold hearings on the incident.

"We urge the committee to call a hearing immediately with representatives from PHMSA, NTSB, and the natural gas distribution industry, including Columbia Gas of Massachusetts and NiSource, in order to examine whether regulators have adequate authority and resources to detect and remedy violations, respond to natural gas accidents in a timely manner, and ensure better operating procedures for companies linked to repeated misconduct," Democratic Sens. Ed Markey and Elizabeth Warren wrote in a letter to committee Chairman John Thune (R-S.D.) and ranking member Bill Nelson (D-Fla.).

Safety advocates noted that the accident could reveal problems that present a hazard for other communities and companies across the country.

"We also hope that if the problem demonstrated so dramatically here is something that could occur in other areas of the country that the Pipeline and Hazardous Materials Safety Administration (PHMSA) will soon release national guidance or safety orders to ensure the safety of us all," said Carl Weimer, executive director of the Pipeline Safety Trust, a Bellingham, Wash.-based advocacy group.

Massachusetts has some of the oldest gas lines in the U.S., and its system is the most leak-prone, said Audrey Schulman, president of the nonprofit Home Energy Efficiency Team, which tracks the integrity of the gas distribution system.

It is not clear if aging pipelines contributed to the explosions, Schulman said, but, "There’s pipes involved and that are still in use that date back to the 1880s. You can’t expect anything to last that long and continue to work well."

Data compiled by HEET show that the number of leaks varies widely across the state, with an average of 0.46 leaks per mile of streets in all municipalities, and a high of 2.8 leaks per mile in Weymouth, southeast of Boston.

In Lawrence, the biggest of the three towns struck by yesterday’s explosions, there were 0.91 leaks per mile — about twice the state average, according to HEET’s data. Andover and North Andover had lower-than-average rates of 0.29 and 0.25, respectively, Schulman said in an interview. The data are a few years old, she said.

About 14 percent of the natural gas mains in Massachusetts are made from cast iron, an older type of line that’s prone to leaks and has been widely used for decades, according to PHMSA data.

The Massachusetts Legislature passed a bill in 2014 requiring utility companies to report leaks to the state Department of Public Utilities, and a 2016 law required them to focus on repairing the largest leaks.

Utilities have been spending hundreds of billions of dollars to comply. NiSource, the parent company of Columbia Gas of Massachusetts, estimated in 2015 it would spend $20 billion on infrastructure replacement nationwide over 20 years.

Columbia Gas said on its website it planned to replace 1,100 miles of pipeline over 20 years.

Federal data show the company has had 10 incidents since 2010 that were serious enough to report to regulators, although six resulted from third-party damage, such as digging around a line or a car colliding with equipment. Eight involved explosions or fires.

The information submitted to federal pipeline regulators showed that about 5 percent of its mains were constructed before 1940, and the construction dates for another 13 percent were unknown.

Nearly 10 percent of the company’s roughly 5,000 miles of mains are made of cast iron, while 44 percent are made of coated steel with cathodic protection against corrosion. Another 43 percent are plastic.

Fewer than 1 percent of its service lines — the low-pressure pipes that connect directly to homes and businesses — date before 1940, and 35 percent were installed after 2000.

The vast majority — about 70 percent — of its service lines are plastic.

Natural gas is shipped across the country at pressures as high as 1,400 pounds per square inch and then gradually "stepped down" through a series of regulators until it reaches the gas meters at homes and businesses, which reduce the pressure to as little as 10 pounds per square inch, said Weimer at the Pipeline Safety Trust.

If the regulators fail, allowing high-pressure gas into homes, then weaknesses in the home’s pipelines could fail or individual appliances could malfunction, Weimer said.

Columbia Gas said in a statement that it expected "an extended restoration effort" in the wake of the explosions. The company’s crews need to shut off the gas meters and conduct safety inspections at 8,600 homes and businesses before they can be reoccupied.

Schulman, at HEET, said Columbia has generally had a good safety record compared with other gas utilities in the state.