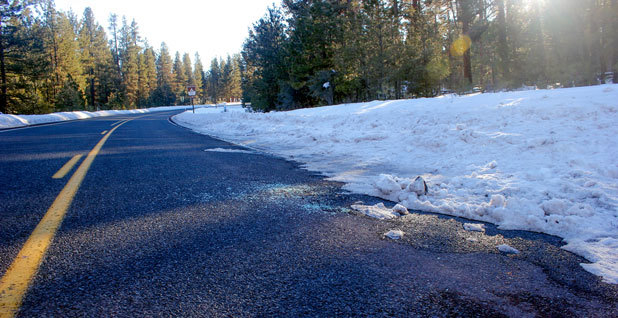 Police arrested the Bundys and shot Finicum on Highway 395 among towering ponderosa pine trees in the Malheur National Forest. Photo by Phil Taylor.

BURNS, Ore. — Shards of glass and M&M’s trail mix littered the highway pavement yesterday at the site where Ammon and Ryan Bundy and three others were arrested and where police gunned down LaVoy Finicum.

The leaders of the Malheur National Wildlife Refuge occupation were pulled over by police Tuesday before dusk about 20 miles north of Burns on Highway 395 in a stand of majestic ponderosa pines.

It took place in the snow-covered Malheur National Forest near the Joaquin Miller horse camp and campground, a federal recreation site that is closed in the winter.

The Bundys and Finicum were driving in two vehicles to attend a community meeting in John Day, Ore., when they were intercepted by the FBI and Oregon State Police.

As they traveled north, they would have traversed the scenic Devine Canyon, a winding stretch of old-growth pine and lichen-covered rocks.

It was an ideal spot for police to converge on the armed militants, given the absence of homes and the lack of turnoffs. It likely minimized potential harm to civilians and the risk of the militants escaping. Police blocked off a 40-mile stretch of road from the U.S. Highway 20 junction near Burns north to Seneca.

"We worked to ensure that we could [arrest them] in the safest way possible — removing the threat of danger from innocent citizens," said FBI Special Agent in Charge Greg Bretzing.

Police have offered almost no details on how the arrests and shooting went down. They merely said that "there were shots fired" and that one person was killed and another wounded.

A pair of tire tracks through the snowbank west of the road shows a northbound vehicle left the pavement and came to a quick stop.

That’s consistent with the accounts of two people, Victoria Sharp and Mark McConnell, who say they were riding in the cars but were not arrested. They both said Finicum crashed his truck off the road after trying to flee police. Sharp said Finicum’s passengers were herself, Ryan Payne, Ryan Bundy and Shawna Cox.

Investigators left neon-orange paint marks on the pavement, and fresh footprints remained in the snow. The scene was quiet yesterday afternoon as the sun filtered through moss-covered tree limbs.

A state police "explosives unit" truck passed on its way south to the police command center in Burns.

Police said they will not release any more details of the arrests and gunfire until the Deschutes County Major Incident Team finishes an investigation. No estimated timeline was provided.

If video evidence exists, it could confirm or dispel allegations by Sharp that Finicum was surrendering when police shot him. That account sowed anger among the militants who chose to stay at the refuge yesterday, defying FBI warnings to leave. They appeared itching for a gunfight with the police who surrounded them.