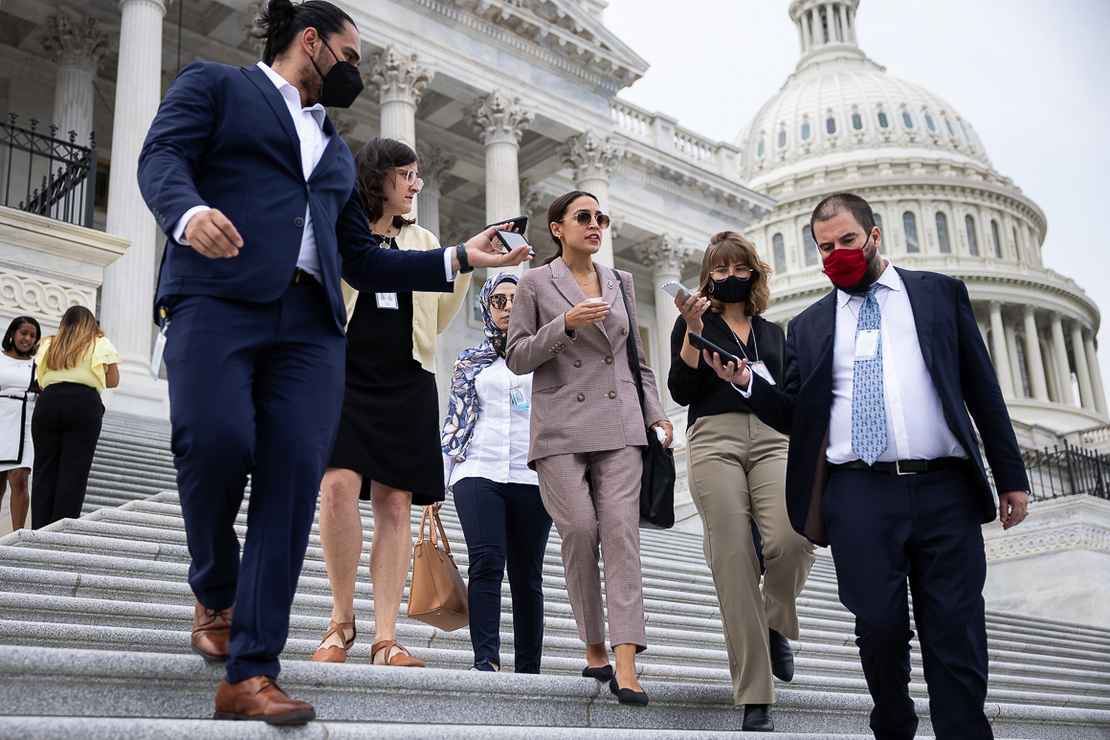 Progressives and climate hawks are clamoring for more money for transit and electric vehicles as the Senate considers its bipartisan infrastructure deal, fearing there won’t be another opportunity to get the extra dollars later.

The infrastructure proposal, which the Senate is set to pass in the coming days, includes $7.5 billion for EV charging and another $7.5 billion for zero- and low-emissions buses and ferries.

Backers of the “hard infrastructure” agreement say there will be another chance to go bigger on funding policies that would combat the climate crisis when Congress takes up a separate $3.5 trillion bill through budget reconciliation.

But progressives are already concerned that the climate-related cash was trimmed between the initial bipartisan deal in June and the final agreement this week. And with a raft of other climate and social priorities competing for the spotlight, lawmakers said yesterday they’ll be pushing to go much further to build out EV charging and convert the nation’s bus fleets.

She recalled the celebration at the White House last month, where the bipartisan group of senators and President Biden emerged with a deal that allowed them to proceed in crafting a roughly half-trillion-dollar infrastructure bill.

“When everybody went in front of the White House and had that nice little photo op about how a deal was struck, it was based on a framework and commitments and numbers that are different than the one we’re talking about today,“ Ocasio-Cortez said.

Public transit, for instance, was cut from $49 billion in June to $39 billion in the deal this week, according to a summary of the deal. Also on the chopping block was an infrastructure financing authority aimed at pumping billions into clean transportation and technology (Climatewire, July 29).

There is also considerable anxiety among House Democrats that the White House will discourage lawmakers from adding up any line items in the reconciliation measure that were already included in the bipartisan infrastructure package.

Rep. Peter DeFazio (D-Ore.), the chairman of the House Transportation and Infrastructure Committee, is furious that his surface transportation bill is getting sidelined for the Senate plan. He told reporters yesterday he’d heard that “Biden said there would be no additional money in reconciliation for anything that was in the bipartisan bill.”

He continued, “We have asked the White House specifically, ‘Is that true?’ They have neither confirmed nor denied.”

Ocasio-Cortez said she was under a similar impression. “Their insistence that nothing that is included in this deal be added to or supplemented in reconciliation is a joke and it’s in bad faith,” she said. “We believe that last-minute stripping on investments in EVs and certain aspects of public transit — I mean, they’re playing games with our lives.”

Congressional Progressive Caucus Chairwoman Pramila Jayapal (D-Wash.) said she had heard the same rumblings. “We did hear that, and it does concern us,” Jayapal told E&E News yesterday. “So, for example, if we can’t add additional funds for transit, that’s a problem. We’re still trying to get all the details.”

Senate Banking Chair Sherrod Brown (D-Ohio), who will get a big say in the reconciliation package, said yesterday that the $39 billion infusion for transit in the bipartisan deal may be the last word on transit if that bill makes it through the Senate. Brown noted his panel would have other priorities, including housing, which was left out of the deal.

“It’s got the biggest increase in transit ever, and it’s got strong labor protections; it’s got a number of things for projects around the country,” he said in an interview. “I’m never satisfied with transit, but this is a good first step.”

Though House Speaker Nancy Pelosi (D-Calif.) has said she will not allow a vote on the bipartisan infrastructure proposal without a Senate-passed reconciliation bill alongside it, the strategy for whether either measure will be amended by the House remains an open question amid calls from progressives that adjustments are necessary.

Although it’s the House’s prerogative to change what it doesn’t like, doing so would jeopardize the future of both bills back in a 50-50 Senate.

House Budget Chairman John Yarmuth (D-Ky.) told reporters yesterday he didn’t expect the House to consider a budget resolution that diverges from the Senate’s $3.5 trillion top line, recognizing the headaches this would cause. Both chambers must adopt a budget resolution to pave the way for reconciliation.

“We’ve got pretty realistic people here about what’s possible and what’s not,” he said

Beyond that, however, Yarmuth said he wasn’t aware there was any strategy for changing the confines of the Senate infrastructure agreement, the text of which has yet to be finalized.

“Their bill comes to us; we have every right to amend it, understanding that the changes we make might not be acceptable to that same group of senators,” he said. “I know there are a lot of reservations among Democrats about what they’ve seen so far of that bill, but whether they’ll try to change it or whether they’ll vote against it, I don’t know.”

Senate Democrats were more circumspect yesterday about the prospects of boosting EV and bus funding in the reconciliation bill, which is widely seen as the most important vehicle for climate policy.

Democrats have already agreed to include a clean electricity standard and Civilian Climate Corps, among other policies, in the partisan package. But Sen. Sheldon Whitehouse (D-R.I.) said it’s too early to fight over what, exactly, makes it in.

“The two bills have to be seen as a package,” Whitehouse said in an interview. “I think it’s premature to cast stones about what was or was not done in the bipartisan bill until we have the reconciliation bill in front of everybody.”

Still, Senate Democrats, too, are keen to deliver on their climate promises, including Biden’s proposal to build out 500,000 EV chargers around the country.

Environment and Public Works Chairman Tom Carper (D-Del.) also said yesterday he is looking to reconciliation as a “second option” for increasing funding for water projects — a sticking point in the bipartisan talks that did not follow the funding formula laid out in the Senate-passed water infrastructure bill (see related story).

“I certainly hope that we find other ways to increase that funding,” Sen. Martin Heinrich (D-N.M.) said of EV and transportation funding. “There will be a number of different opportunities. You never get the entire loaf, so I think we view this as a down payment, not as the end all be all.”