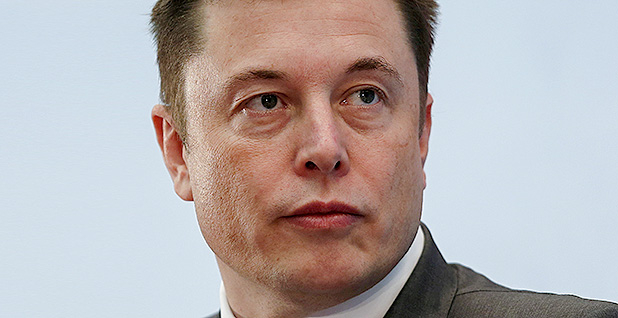 Elon Musk will step down as chairman of Tesla Inc. as part of a deal announced over the weekend that upends the company’s leadership at a time when its financial future is in doubt.

The agreement was an abrupt turnaround from last week, when Musk reportedly rejected a settlement with the Securities and Exchange Commission and then faced an SEC lawsuit related to public comments about taking the company private. The SEC charged that Musk misled investors when he tweeted that funding was "secured" for a private buyout at $420 a share, which allegedly was a marijuana reference (Energywire, Sept. 28).

Under the terms reached with the SEC, which are subject to court approval, Musk will be ineligible to serve as chairman for three years and will pay a $20 million penalty.

"The total package of remedies and relief announced today are specifically designed to address the misconduct at issue by strengthening Tesla’s corporate governance and oversight in order to protect investors," said Stephanie Avakian, co-director of the SEC’s Enforcement Division.

The company also will be required to replace Musk with an independent chairman and appoint two new independent directors to its board. Tesla will have to pay a separate $20 million fine and establish new procedures and controls to oversee Musk’s communications, including his tweeting activity.

Musk and Tesla settled without admitting or denying the SEC’s allegations.

The settlement is in some ways a victory for Musk, who will be allowed to continue as CEO and guide Tesla’s overall vision. The SEC lawsuit could have barred him from serving as director of any public company, a harsher penalty. The SEC had sought a jury trial with the lawsuit, which could have subjected Musk and Tesla to months of legal turmoil.

"Musk can have much influence as CEO because he still will be in charge of day-to-day operations, which he seems to be very good at doing, and that is key for Tesla, the SEC and shareholders," said Carl Tobias, a law professor at the University of Richmond.

After the lawsuit was filed, many analysts expressed concerns that Tesla could face trouble raising cash without Musk, the company’s co-founder and public face.

Because of the entrepreneur’s influence, the SEC was in a "quandary" about the prospect of his being removed as CEO, because investors then could be damaged, according to Charles Elson, director of the Weinberg Center for Corporate Governance at the University of Delaware.

At the same time, the SEC settlement still could bode trouble for Tesla by giving a "leg up" to shareholders likely to file new lawsuits, Elson said.

"That’s the real trouble for the company," he said. "There was a lot of money lost on this," and there’s going to be more legal cases, he said.

That dynamic could put a financial squeeze on Tesla when it likely needs to raise more cash. The company has yet to turn an annual profit and has more than $10 billion in debt, with several more billion dollars in IOUs coming up in the next few years.

This week, the company is expected to release data on how many Model 3 electric cars it made in the third quarter and delivered to customers, a key benchmark for future growth. That will signal how close Tesla is to its next stated goal of producing 10,000 units a week of the Model 3, intended to be a mass-market electric sedan.

Bloomberg reported that Musk sent an email to employees Saturday stating that the company was close to making a profit and could "achieve an epic victory beyond all expectations."

Tesla did not respond to requests for comment, but Musk said last week in response to the lawsuit that his actions were taken "in the best interests of truth, transparency and investors."

The company is still facing a Department of Justice investigation related to Musk’s social media activity and lawsuits from shareholders claiming the tweets manipulated stock prices.