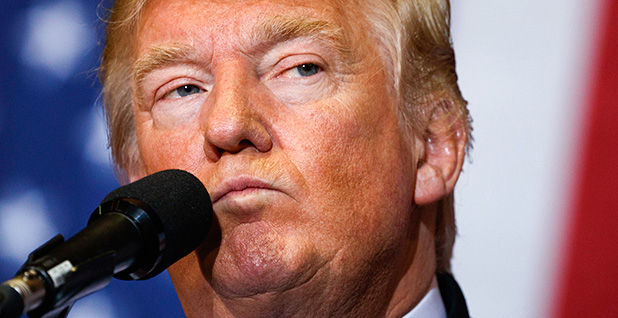 The landmark Paris Agreement enters into force today as U.S. voters prepare to choose between a candidate who supports the climate deal and one who has said he would cancel it.

The agreement reached by nearly 200 countries outside the French capital last December has taken effect more than three years before its framers expected it to, after nations rushed to submit their ratification documents in just 10 months.

John Morton, director for energy and climate change at the National Security Council, said negotiators will assemble in Marrakech, Morocco, next week for the first U.N. conference since Paris "with a tremendous amount of positive momentum."

"2016 has been a truly historic year for international climate action," he told reporters on a call yesterday, referring not only to the early entry into force but also to new deals on aviation emissions and an amendment limiting climate-forcing coolants. Both were long-sought goals of the Obama administration.

Morton and U.S. Special Envoy for Climate Change Jonathan Pershing said on the call that parties are looking forward to focusing on the nuts and bolts of the deal after more than two decades devoted to getting it across the finish line.

"The political dynamics here are quite significant," Pershing said.

Besides this year’s trifecta of climate deals, global markets have also shown an uptick in investment in renewables compared with fossil fuels.

"Those kinds of things are a clear mark of progress," Pershing said.

The two-week conference begins Monday on the eve of the U.S. presidential election, which threatens to doom U.S. participation in global climate agreements if GOP presidential nominee Donald Trump wins. He disputes man-made climate change and has promised to "cancel" or at least "renegotiate" the global agreement.

In Michigan on Monday, Trump promised to cancel "billions in climate change spending for the United Nations, a number Hillary wants to increase." Also this week, his campaign released its "New Deal for Black America," which pledged to "cancel all wasteful climate change spending from Obama-Clinton" — a move the campaign claimed would save the U.S. government $100 billion over eight years that could be redirected to infrastructure projects in the "inner cities."

It’s unclear what line items the Trump campaign has in mind. The United States has pledged $3 billion to the United Nations’ Green Climate Fund between now and 2020 and has already written its first $500 million check. Another half-billion is likely to be appropriated before a new president is inaugurated on Jan. 20. The United States has also contributed to some other funds in the past to help poor countries respond to warming — Marrakech could give the United Nations’ Adaptation Fund a new lease on life, for example.

Trump would drop U.S. support for the U.N. Framework Convention on Climate Change. Republicans in Congress say U.S. participation is unlawful because the agency has accepted Palestine as a non-member state. Also on the chopping block could be any or all of President Obama’s domestic climate policy programs. But Trump’s claim that disposing of those measures would result in net savings is controversial. The Obama White House in 2014 estimated that if temperatures rise by 3 degrees Celsius compared with preindustrial levels, climate change could cost the U.S. economy $150 billion a year.

Climate talk participants acknowledge that the U.S. election will cast a long shadow at the start of Marrakech. Aziz Mekouar, Morocco’s ambassador of multilateral negotiations, said in a recent interview that it could be a distraction (ClimateWire, Nov. 2). And Pershing’s predecessor, Todd Stern, told E&E News that the U.S. Election Day could prove to be the most important day of the summit.

"For Marrakech itself, you have this very positive backdrop going into it," he said, adding that the election of Clinton would signal continuity to negotiating partners.

"Obviously they perceive something much, much less certain, to put it mildly, with respect to Trump," he added.

Some international delegates have been unusually frank in their criticisms of the Republican candidate. Weighing in on a foreign election — especially a U.S. election — is a risky proposition for a diplomat. But earlier this week, veteran Chinese climate negotiator Xie Zhenhua told Reuters that Trump’s pledge to remove the United States from Paris would be "unwise."

He expressed optimism that the United States will keep its Paris pledge to cut emissions between 26 and 28 percent compared with 2005 levels by 2025, pointing to states’ policies and private-sector actions.

"I believe that the American society is a strong society, much stronger than any possible head of state," he said.

Filho dismissed questions about whether other countries would follow suit if Trump withdrew the United States from Paris.

"We’re doing our part," Filho said. "Other countries are also doing their part."

Stern said foreign negotiators he has met with since leaving the State Department early this year have shown "a lot of concern and a lot of desire to be reassured that the United States is going to stay on its program."

"If the election goes a particular way, then the bet on what the U.S. approach will be going forward is much less clear," he added.

On their press call, Pershing and Morton seemed to be previewing a post-election message directed as much at a skeptical president-elect as at nervous foreign delegations.

"I think the question of commitment to action is no longer one which is being debated," Morton said. "It’s a question of how quickly it will move forward and, frankly, who will lead and who will benefit most from this transition to a lower-carbon economy."

Meanwhile, Trump’s team is likely exploring ways that the candidate could cancel the Paris Agreement on his first day in the White House, according to a source close to the campaign.

Myron Ebell, who heads Trump’s U.S. EPA transition team, has urged that a Trump administration submit Paris to the Senate for ratification. Ebell argues that such a move would effectively rescind the United States’ participation, since it’s unlikely to pass the Senate.

‘Not a fight worth picking’

Paul Bodnar, Morton’s predecessor at the National Security Council, who is now a senior fellow at the Rocky Mountain Institute in Colorado, said Trump might find that scrapping the agreement would anger his negotiating partners and deplete his store of political capital early in his presidency.

"Trump likes to talk about how he’s going to ‘renegotiate’ everything internationally, whether it’s NATO or trade deals," Bodnar said. "Negotiation is a two-way street. … If he tries to tear down the structure of Paris, which an awful lot of countries, from China to the Europeans, care a lot about, it stands to reason that he would have much less success renegotiating other things that he wants. I think even he will realize that’s not a fight worth picking."

Stern said former President George W. Bush saw his international clout take a hit when he walked away from the Kyoto Protocol in 2001 after the Clinton administration had taken an active role in brokering it.

"But I think that’s nothing compared to what would happen with respect to Paris," said Stern, adding that the 2015 treaty is much more popular at home and abroad.

"I think if the United States were to suddenly say ‘not interested; we’re going to back away from this,’ it would radiate out in a much broader way diplomatically with respect to the whole panoply of issues that we have to address with partners and allies all over the world," he said.

Frank Maisano of Bracewell LLP said there would be no price exacted for a decision to scrap Paris, because it isn’t binding. "You may be scorned publicly, but that has never really stopped any nation before," he said.

"The problem is, our negotiators (and others) always knew that the symbolic Paris Agreement would never be enough," he said in an email. "While they try to hammer out more details, I expect a lot of other nations will be annoyed by others’ demands."

While most foreign negotiators remain circumspect about what the election might mean for the Paris Agreement and other issues, international climate advocates have not been.

"People around the world are watching the U.S. elections with keen interest, as decisions taken in Washington, D.C., have impacts far beyond U.S. borders," said Harjeet Singh of Action Aid. "It’s clear that the candidates have differing views when it comes to climate change, but whoever is elected must make sure that the U.S. sticks to its obligations under the Paris Agreement and increases ambition to tackle climate change."

Nations are invited to revise and tighten their commitments to Paris by 2020, the final year of the next president’s first term.

Saleemul Huq, a senior fellow at the U.K.-based International Institute for Environment and Development, said poor countries are following the U.S. election with "huge trepidation."

"From what I can tell of Mr. Trump’s views and personality, his attitude to climate change is the least of the problems the world will have to contend with him in the White House!" he said in an email.

Trump has said at various points throughout the campaign that he might use nuclear weapons, he noted.

"So we probably won’t need to wait for climate change to destroy the world as he may do it even sooner!"