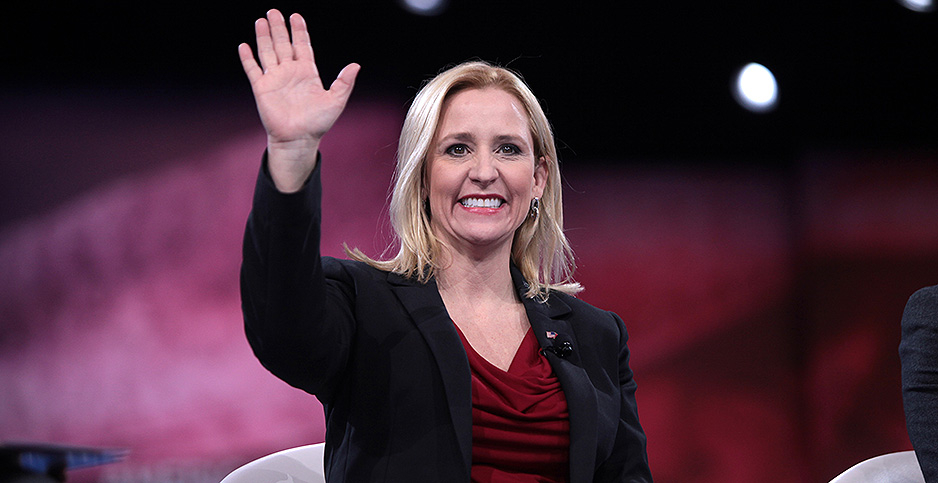 After years of feuding over the future of two high-polluting Arkansas power plants, Entergy Corp. and the Sierra Club trumpeted a tentative pact last November to wean both facilities off coal within a decade or so (Energywire, Nov. 19, 2018).

Neither side, however, may have reckoned on the reaction of Entergy’s onetime friend: Arkansas Attorney General Leslie Rutledge (R).

Within weeks of the agreement, Rutledge asked state utility regulators to investigate, citing "potential negative impacts" on ratepayers. Nine months later, the proposed deal is languishing in a federal court.

There’s no indication thus far that the hold-up has imperiled the agreement. But Rutledge’s rear-guard gambit can be seen as a parable for the scrambled alliances caused by a fast-evolving electricity market fueled by cheap natural gas and more reliance on renewable energy sources.

The former campaign surrogate for President Trump had staunchly sided with Entergy in a separate fight over an Obama-era haze reduction plan. In this case, lawyers for the company, which has pumped thousands of dollars into Rutledge’s campaign account through its political action committee, dismiss her concerns as "misplaced."

"I don’t think most people, even at the regular political level, understand how quickly this market is changing," said Seth Feaster, a data analyst with the Institute for Energy Economics and Financial Analysis, a nonprofit research firm that supports the shift to renewables.

Rutledge, a political hard-charger now in her second term as Arkansas’ top law enforcement officer, was not available for an interview. A spokeswoman said she’s doing her statutorily mandated job of looking out for customers’ interests and has previously backed wind and solar projects when they were shown to be in the public interest.

Allied with her, however, is a business coalition that includes an advocacy group for Wyoming coal interests, according to court papers. On a related front, Rutledge has intervened in a separate rate case with the goal of blocking another utility from recouping costs related to the retirement of a coal-fired generating unit. Like many GOP politicians, she cheered the administration’s bid to scrap the Obama-era Clean Power Plan; Rutledge is also a past chair of the Republican Attorneys General Association, a group that has welcomed support from fossil fuel interests (Greenwire, Sept. 7, 2016).

"It strikes me as very rare to see an AG in a state that has no coal industry be such a forceful advocate for coal," Sierra Club attorney Tony Mendoza said in a phone interview.

Details of the deal

The proposed deal, packaged in the form of a consent decree, applies to Entergy’s White Bluff and Independence plants, a pair of 1980s-vintage facilities in eastern Arkansas. Both are formidable polluters.

In 2017 alone, for example, the two plants together spewed some 42,000 tons of sulfur dioxide, according to the Sierra Club. Nationally, both ranked among the dirtiest power industry sources of SO2 and nitrogen oxides, the group said in a news release.

Under the tentative deal, Energy would halt the use of coal for White Bluff by the end of 2028 and follow suit at Independence by the end of 2030. Both sides could claim victory; the Sierra Club and its partner, the National Parks Conservation Association, touted the long-term health benefits of putting two big coal plants out of commission.

Entergy has portrayed the deal as mostly embodying steps already in the works. For the New Orleans-based company, the move is essential to a goal of whittling the proportion of coal-fired generation in its system from about 9% last year to almost nothing by 2030.

"These actions will result in Entergy closing 80 percent of its coal fleet," the company said in a report earlier this year.

The agreement will also let Entergy avoid installing costly SO2 scrubbers. That requirement was at the heart of the 2016 Obama-era plan intended to cut haze-forming pollution blamed for clouding views in national wilderness and wildlife areas across Missouri and Arkansas.

That plan touched off a legal battle between Entergy and EPA before the 8th U.S. Circuit Court of Appeals. Rutledge’s office sided with Entergy from the outset, arguing that ratepayers would be saddled with higher electric bills to cover the expense of the new controls (Greenwire, Sept. 2, 2016).

It’s been a different story with the proposed consent decree, now awaiting a judge’s approval in the U.S. District Court for the Eastern District of Arkansas. In seeking to intervene in the court proceedings soon after the agreement was announced, Rutledge assailed Entergy. By agreeing to the deal, her staff wrote, the company has shown that "it cannot and will not protect the interests of its customers."

The pact is likely to result in an "unreasonable" rate increase, the staff added, saying that the company should have first gotten approval from the Arkansas Public Service Commission, which oversees utilities in the state. At the same time, Rutledge asked the commission to investigate; months later, a PSC spokeswoman would only say that "this pleading remains under consideration."

In court, the pushback from Entergy lawyers was brusque. Rutledge’s opposition to the deal is based on "generalized grievances about interference with state prerogatives and speculation about the potential economic impact of the settlement on ratepayers in the distant future," they wrote in a January filing. "These concerns are misplaced."

They also voiced alarm about the possible consequences should the agreement fall apart. The proposed consent decree is meant to settle allegations that Entergy illegally upgraded the White Bluff and Independence plants without first getting the needed Clean Air Act permits. Without it, the company could face renewed pressure to install new pollution controls at a cost of hundreds of millions of dollars, Entergy lawyers said.

The last submission in the court docket was in February. U.S. District Judge Kristine Baker has given no sign of when she will rule on the environmental groups’ motion to approve the consent decree. Also in limbo are the bids by Rutledge and the Arkansas Affordable Energy Coalition to intervene.

Among the coalition’s members are heavy electrical users like steelmaker Nucor Corp.; they also include the Energy Policy Network, which says in court papers it represents "the interest of low-sulfur coal" from Wyoming’s Powder River Basin. On its website, the network suggests that the Arkansas coalition was formed under its leadership. Randy Eminger, the group’s executive director, did not reply to phone and email messages seeking more information on its role.

Since Rutledge’s first successful run for attorney general in 2014, Entergy’s political action committee has given $7,400 to her campaign, according to FollowTheMoney.org, a nonpartisan research organization. In an email, Kerri Case, a spokeswoman for the company’s Arkansas operations, said it would be "inappropriate" to speculate on whether its support would continue, but that Entergy remains committed to the settlement. "It is not necessarily unusual for a case of this complexity to take some time," Case said.

Janine Parry, a University of Arkansas political scientist, saw another force at work: Rutledge’s aspirations for higher office. In that context, her opposition to the deal represents a "twofer," Parry said.

Not only is Rutledge playing the consumer protection card, Parry said, "she’s also playing the anti-regulation card" that appeals to Republican base voters in the state. In response, Rutledge spokeswoman Amanda Priest reiterated that her boss is carrying out her statutory duty to represent ratepayers.