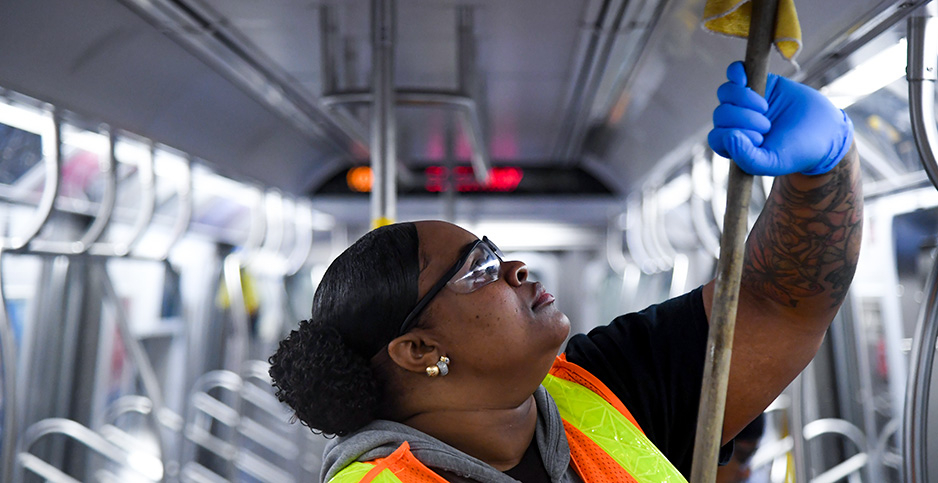 When the coronavirus pandemic finally ebbs, John Wetmore plans to commute by bus and train.

The 63-year-old says mass transit won’t be any more hazardous than delving into large crowds at restaurants or movie theaters once the virus is under control in the Washington, D.C., area, where he lives.

But Wetmore, who hosts a public television show called "Perils for Pedestrians," recognizes that not everyone feels the same way.

"I think there are gonna be some people who will be reluctant to take transit for quite some time," he said in an interview, noting that others may have lingering concerns about being exposed to the contagion in tight spaces.

For now, the swing of a subway gate and the sigh of bus brakes are memories for many Americans.

Public transit ridership has plummeted in cities across the country as the pandemic forces people to stay at home. Boston’s commuter rail system reported a 90% decline in passengers since the virus began, while New York City’s subway system has seen a 92% drop.

The trend has spurred tough questions: Will ridership ever return to normal levels? Will cash-strapped transit agencies stay afloat? And what will buses or trains look like in a post-pandemic society?

There are no easy answers. But Paul Skoutelas, president and CEO of the American Public Transportation Association, acknowledged that hordes of riders won’t return right away.

"It will take some time to draw riders back," he said. "One of the big concerns is that people are fearful. They’re fearful of getting on an airplane, riding public transit and going to a restaurant."

Still, Skoutelas expressed cautious optimism about the fate of transit in cities where the trauma of contagion is bound to linger. He predicted that passengers would eventually return to buses and trains, which he said would play a "critical" role in the economic recovery by connecting people with jobs.

Then there’s the role of transit in a crisis that predates the coronavirus pandemic: climate change.

"We have another crisis that’s already here: the climate crisis. And public transportation helps us preserve a planet worth living on," said Alex Hudson, executive director of the Transportation Choices Coalition, an advocacy group based in Washington state.

Not everyone has been able to avoid public transit during the pandemic. Many essential employees, including health care workers and grocery store clerks, cannot afford a car. They have continued to ride buses and trains.

They are some of the most vulnerable members of society when it comes to contracting COVID-19, the disease caused by the novel coronavirus.

"The very people who remain on the buses are also the people who are most likely to get infected with the disease because they are low-income folks, they are people of color and they are women," Hudson said. "Those are some of the indicators that we’re seeing around higher rates of infection due to a whole host of things, but primarily race-based health disparities in America."

To protect both riders and transit employees, agencies around the country have adopted a host of strategies, sometimes in unprecedented ways.

New York Gov. Andrew Cuomo (D) announced last week that the New York City subway system will no longer run 24 hours, seven days a week for the first time in its history. Instead, the system will close from 1 a.m. to 5 a.m. each day for deep cleaning and disinfecting.

Many bus operators have taken additional steps, such as requiring rear-door boarding, which protects drivers from infected passengers, and cashless fares, which prevent the hand-to-hand exchange of money.

"These steps are critical," said Brianne Eby, senior policy analyst at the Eno Center for Transportation, a D.C.-based think tank. "Because if we see this sort of death spiral where riders don’t trust public transit, then they won’t bring the fare revenue, and agencies will have to find new sources of funding."

It remains unclear whether these changes will stick in a post-pandemic world.

Yonah Freemark, a doctoral candidate at the Massachusetts Institute of Technology and founder of the blog "The Transport Politic," said he thinks transit agencies might require people to wear face coverings for some time.

"There should be a requirement that people wear masks. But it should not be punitive," he said. "There should be freely available masks for people upon entering the systems, in order for people to feel like they can go in and not breathe in the disease."

Hudson, of the Transportation Choices Coalition, said she thinks transit agencies may relax social distancing guidelines in tandem with local municipalities, even as other efforts to safeguard the public continue.

"I imagine that increased cleaning is gonna become permanent," she said. "That may even be a new standard or expectation."

Then there’s the thorny question of funding.

Many transit agencies faced budget shortfalls before the pandemic. Once the virus began to spread, they lost fare revenue and incurred new costs by having to sanitize their systems.

But there are signs the sector may need additional relief from federal lawmakers. A recent analysis by TransitCenter, a New York-based foundation, found that CARES Act funding would only cover transit agency shortfalls for an average of 5.4 to 8.3 months in the 10 U.S. regions with the highest transit ridership. They include Chicago, New York and Los Angeles.

"Certainly, the CARES Act provides sorely needed financial breathing room for transit agencies across the country. But transit is not out of the woods by any means," said Steven Higashide, the director of research at TransitCenter and an author of the analysis.

A spokesman for the Metropolitan Transportation Authority, which runs New York City’s subway and received $3.8 billion from the CARES Act, said the agency is seeking an additional $3.9 billion in the next coronavirus aid package.

Skoutelas said the American Public Transportation Association plans to submit a request to Congress for additional funding later this week. He declined to specify the dollar amount.

Still, history provides some encouraging examples that transit ridership — and revenue — can stage a comeback after a major disaster.

After the 2003 outbreak of severe acute respiratory syndrome (SARS) in Taiwan, researchers found that transit ridership in Taipei returned to normal levels within four months. And after the Sept. 11, 2001, terrorist attacks, New York’s subway and buses didn’t stay empty for long.

"I think there’s a huge recognition that transportation is going to change after this," said Eby, the analyst. "But one of the things that gives me hope is that looking at previous events, whether it’s Sept. 11 or SARS, ridership does rebound after some time."