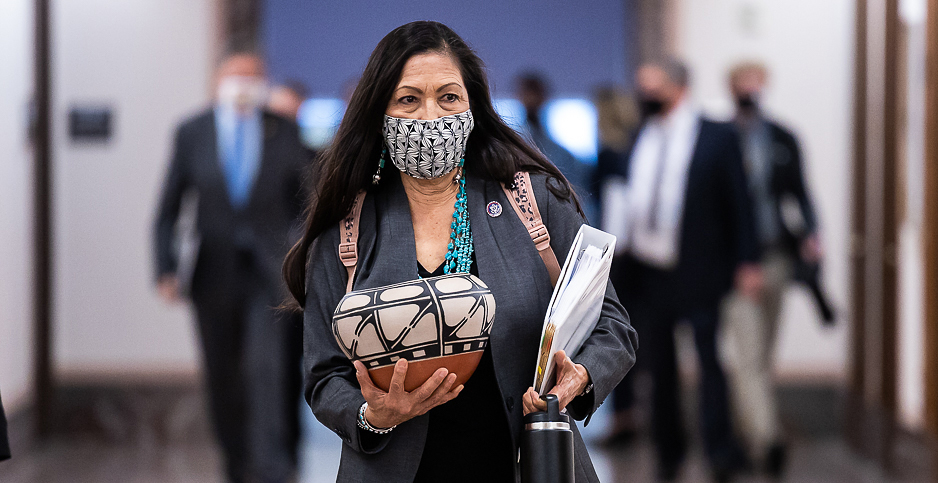 Rep. Deb Haaland (D-N.M.) walking to her confirmation hearing for Interior secretary yesterday. She was carrying a gift for Sen. Martin Heinrich (D-N.M.), who introduced her. Francis Chung/E&E News

Rep. Deb Haaland will be subjected this morning to a second round of questioning by the Senate Energy and Natural Resources Committee — a continuation of her confirmation hearing that began yesterday.

Her answers could seal her fate among Republicans who claim they haven’t made up their minds yet on whether to support the New Mexico Democrat for Interior secretary.

The chances at this point of her winning over the majority of the GOP conference are diminishing, with one possible scenario emerging in which Republicans could actually oppose her as a bloc.

A prevailing narrative from Republicans coming out of yesterday’s 2 ½ hour grilling was that Haaland underperformed.

In reality, there likely wasn’t much Haaland could do to convince Republicans to vote for her if they were predisposed to oppose her, as so many of them were before the confirmation hearing.

In conversations with over a dozen Senate Republicans on Capitol Hill yesterday, most remained unwilling to let go of Haaland’s voting record in the two years she has served in the House, where she championed the Green New Deal and expressed disdain for energy extraction on federal lands — positions conservatives have called "radical."

For many Republicans, these positions have come to define Haaland regardless of other factors that might be working to her advantage, such as the data point that she authored more bipartisan bills than any other House freshman and a glowing endorsement from the dean of the House, Alaska Republican Rep. Don Young.

"You mean the nominee who supports the Green New Deal and has protested, wants to shut down pipelines?" Sen. Marco Rubio (R-Fla.) quipped when asked his position on Haaland. "I’m voting ‘no.’"

Sen. John Hoeven (R-N.D.) said he was having trouble getting beyond Haaland’s past opposition to the Dakota Access pipeline, an economic driver in his state. In 2016, two years before her election to Congress, Haaland visited the Standing Rock Sioux Tribe’s reservation in solidarity with protesters who said sacred land would be disturbed by the pipeline’s construction.

"She’s got a record to defend — both herself, her comments and the administration’s — that is very anti-job," said Sen. Bill Cassidy (R-La.). "I mean, what can she say? Those are her comments."

During the first installment of her confirmation hearing yesterday, Republicans grilled Haaland on whether she would seek to influence President Biden’s environmental policies with her own progressive agenda.

Most Republicans were narrowly focused on whether she would try to get Biden to turn his freeze on issuing new oil and gas leases on federal lands and waters into a permanent drilling ban.

Sen. Lisa Murkowski (R-Alaska) told Haaland that Alaskans are asking why the administration is "out to get us." Sen. Cindy Hyde-Smith (R-Miss.) asked what she should tell her constituents who fear that their livelihoods are no longer secure amid the leasing freeze.

Haaland expressed compassion for communities that will need support in transitioning away from fossil fuel economies and pledged to assist in that transition.

She said repeatedly that the current policy in place is a "pause," not a "ban" or a "moratorium," and that she had no reason to believe Biden has a secret plan to zero out this practice.

And she emphasized that she would be serving as the pleasure of the president in a role very different from that of a Congress member.

"I realize that serving as a Cabinet secretary is far different from being a member of Congress, where I’m representing one district," Haaland said. "It’s representing every single American."

None of this was enough for Republicans who wanted her to disavow her views completely or disassociate herself from the Biden administration — two things that were not going to happen.

"I’m concerned by the answers I heard," said Sen. Steve Daines (R-Mont.), who was planning to slow-walk Haaland’s confirmation before her hearing had even been scheduled. "She seemed to always default back to whatever President Biden says — ‘I serve at his pleasure’ — but I hope she realizes she’s an important adviser to the president and willing to speak truth to power."

During the hearing, Daines asked Haaland why she had co-sponsored legislation to keep grizzly bears on the endangered species list in perpetuity, "when science tells us the bear numbers are well above the recovery targets."

Haaland replied that at the time she signed on to the bill, she must have been "caring about the bears."

Cassidy asked her if she agreed with the science showing that pipelines do not contribute to climate change. Haaland would only say she promised that the Interior Department under her leadership would be "guided by science."

Of the 15 Republicans interviewed by E&E News yesterday, all said they either were inclined to oppose Haaland or had not yet made a decision.

Hoeven insisted he was still working to determine whether Haaland would be willing to engage in conversations about how to support renewable as well as traditional sources of energy, specifically by way of pipelines.

"She’s going to have to demonstrate a commitment to working with us on these things," Hoeven said.

Murkowski said she had "many, many, many pages" of questions to which she still wanted answers.

Sen. Susan Collins (R-Maine), a moderate who is seen as a swing vote on nominees, told reporters she was waiting to make a decision until after Haaland’s hearing is complete.

So far, there does not seem to be a GOP mobilization against Haaland as there currently is against Neera Tanden to lead the Office of Management and Budget — a nomination that seems all but doomed after Sen. Joe Manchin (D-W.Va.), the chairman of the Senate Energy and Natural Resources Committee, came out in opposition to her last Friday.

Republicans are also not galvanized in their dislike for Haaland in the same way they are for California Attorney General Xavier Becerra (D), Biden’s nominee to be secretary of Health and Human Services. GOP senators are so opposed to Becerra that Sen. Tom Cotton (R-Ark.) is paying for digital ads to pressure Democrats to vote against him.

If Republicans band together to oppose Haaland as a bloc, she will need all Democrats to support her. Manchin, who hails from a coal-producing state and shares some of the same worries Republicans have about Haaland’s record opposing fossil fuels, has said he’s undecided.

He hinted, however, which way he might be leaning in a statement released yesterday afternoon that hailed the nominee’s "commitment to working with [him] on West Virginia priorities."

Sen. Martin Heinrich (D-N.M.) said he would be surprised if Republicans became a united front against Haaland’s confirmation that would make Manchin’s support necessary to get her over the finish line.

"I think it would be outrageous if they voted against her as a bloc, especially given the relatively, you know, extreme views of some of their recent secretarial nominees and, frankly, secretaries," he said. "I think it would paint a very damning picture of the Republican Party if she had no support."

Heinrich’s assertion comes as Haaland’s supporters say she is being held to a different standard as an Indigenous woman who would be the first Native American to hold a Cabinet position.

Sen. Ron Wyden (D-Ore.), who agreed with Heinrich that Haaland did well yesterday, said he wasn’t surprised that Republicans were painting a dire picture of her performance.

"I get the politics. I know there’s a big special-interest lobby," Wyden said, suggesting his GOP colleagues were motivated by their ties to the oil and gas industry. "That’s gotta be driving a lot of this."