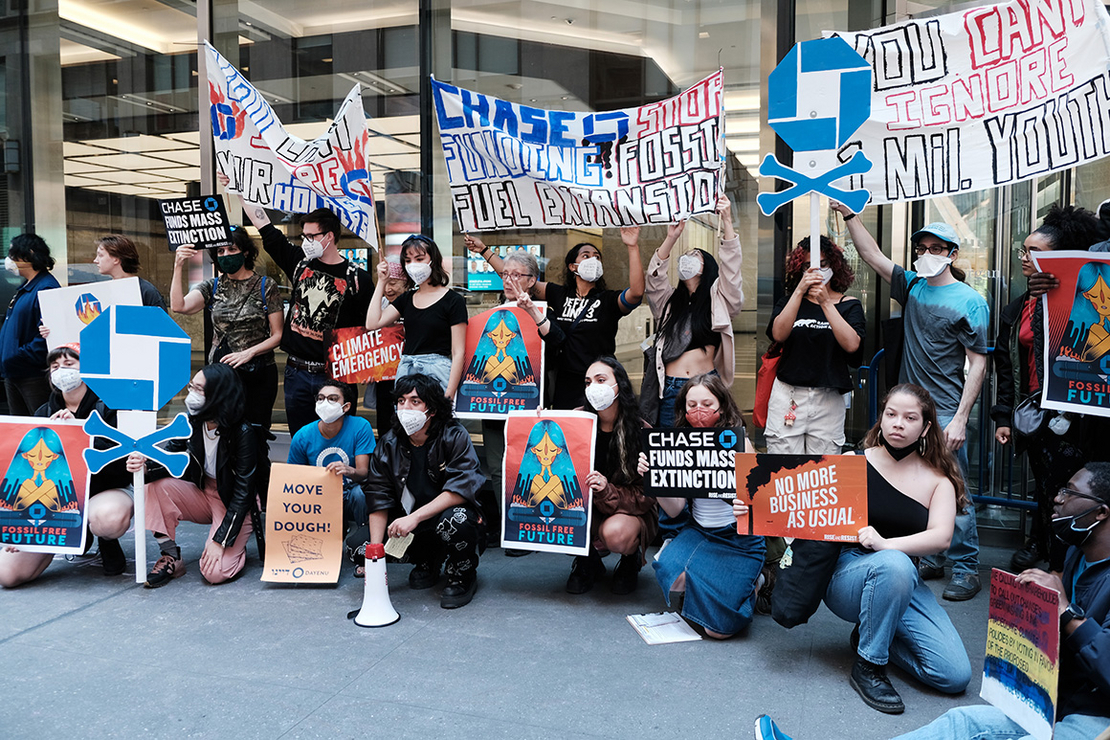 Climate activists demonstrate outside the building where JPMorgan Chase & Co. held its annual shareholders meeting on May 17 in New York City. The group was protesting the global financial institution's funding of fossil fuel. Spencer Platt/Getty Images

Two of the nation’s top financial regulators are inching closer to releasing sweeping guidance that would steer how major banks assess the threats they face from climate change.

The dual-track effort by the Federal Deposit Insurance Corp. and the Office of the Comptroller of the Currency isn’t without controversy. Much of debate centers on how specific these instructions should be and what types of lenders the regulators should target.

Those battle lines came into sharper focus Friday, which marked the end of the comment period for the climate guidelines being developed by the FDIC. The FDIC and the Office of the Comptroller of the Currency released near-identical “draft principles for climate-related risk management” in December and March, respectively.

If and when they are finalized, these principles won’t carry the same weight as a rule or regulation. But they still can be used by federal regulators to make clear what they expect from the banks they oversee.

Dozens of groups and individuals submitted their opinions to the FDIC during the comment period that ended last week. Many of the responses focused on which institutions should be subject to the new climate principles.

The banking industry wants the regulators to pursue a highly flexible set of guidelines that pertain only to large lenders. Environmentalists, financial reform groups and more said regulators should issue more detailed guidance to a broader set of financial institutions.

“We feel that they’ve left too much discretion to the banks,” Phillip Basil, who directs banking policy at Better Markets, a group that advocates for tougher Wall Street regulation, said in an interview.

So what is climate-related guidance? And why does it matter? Put simply, the draft document from both agencies lays out how they expect banks with more than $100 billion in assets to assess and address their exposure to intensifying extreme weather events and the clean energy transition.

According to the guidance, lenders should take a range of steps to do so, including ensuring their boards and executives are informed about the financial threats of climate change. Other expectations include the infusion of climate considerations into business strategies and the development of processes to identify vulnerabilities under varying climate scenarios.

Banks could, for instance, use “scenario analysis” to gauge how their loan portfolios would fare amid unabated climate change due to political inaction (Climatewire, April 1).

Another question was whether financial regulators should expand the guidance to apply to smaller banks.

Groups including the Rocky Mountain Institute, the Center for American Progress, MSCI Inc., Moody’s ESG Solutions and Ceres said the principles could be applied to lenders of all sizes.

Moody’s ESG Solutions, for instance, said an “argument could be made that smaller financial institutions are even more vulnerable to climate risk due to (typically) localized/concentrated composition of their portfolios. Thus, such financial institutions shall benefit from a robust climate-related financial risk management framework.”

Ceres, an investor-focused environmental nonprofit, emphasized that “all financial institutions face climate-related financial risks, not just those over $100 billion in assets.” As such, the group called on the regulators to lower the threshold to $50 billion. Ceres also suggested the agencies should tailor their approach to different institutions to accommodate for differences in size, complexity, risk profile and more.

Industry groups argued the opposite. While some acknowledged that climate change poses sweeping financial risks, there was a general consensus that the agencies should not broaden the guidance to include smaller lenders.

We “urge the FDIC not to expand the scope of the guidance to mid-size and community banks until more robust data is available, and the climate-related financial risks and opportunities are better understood,” the American Bankers Association, a lobbying group representing banks of all sizes, wrote in its comment letter.

Multiple independent lenders argued the same on the grounds that even small banks are seasoned experts in climate risk mitigation and do not have the resources necessary to comply with additional regulation.

The Eastern Colorado Bank, which holds just $580 million in assets, was among them. Brett Legg, the firm’s president and chief financial officer, argued in a letter that both the bank and its customers are “very experienced” in mitigating climate risks via insurance products and the adoption of modern farming and grazing practices.

“Small farmers and ranchers are struggling now,” Legg wrote. “With increased regulation it would only increase the number of our customers who have no choice but to sell their farms and ranches, many of which have been in their family for generations.”

Another key issue is whether the agencies should encourage lenders to reference well established metrics, climate scenarios and more when gauging their own vulnerabilities — an idea progressives and climate groups support, but banks do not.

Basil, of Better Markets, emphasized that issue in his letter to the FDIC. He acknowledged that banks already are in the process of establishing their climate-related data collection, risk measurement, modeling and reporting processes.

“But an examination of their publicly disclosed materials around climate risks shows that they are each approaching these processes in vastly different ways,” he added. “This unique issue should be addressed in the proposed principles by promoting the use of or comparison to current climate risk data collection and measurement ‘best practices.’”

Industry groups such as the American Bankers Association, meanwhile, said the FDIC should stick with a flexible approach that “allows banks to assess the risks they identify as the most material to their unique circumstances.”

The Federal Reserve has indicated it also would release climate risk guidance, which likely would mirror the proposals put forward by the FDIC and the Office of the Comptroller of the Currency. Experts expect the three agencies ultimately will release a joint final version, adjusted based on public input.