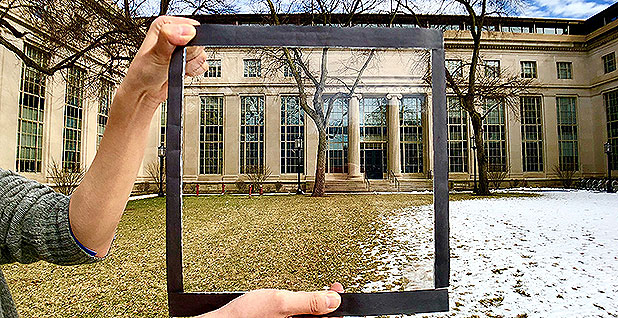 Scientists at the Massachusetts Institute of Technology have developed two separate technologies that can cool buildings and equipment without using fossil fuels or electricity.

The "smart window" and "high-tech parasol" target one of the most difficult challenges in the energy world — how to curb greenhouse gas emissions as cooling demand skyrockets. The second volume of the National Climate Assessment released last week, for example, cited growing air conditioning use as a chief reason why climate change could cause electricity spending to jump 18 percent in the next two decades (Greenwire, Nov. 27).

The smart window, described this month in the journal Joule, is unique for being able to turn its cooling abilities on and off without any additional power and still be viable as an inexpensive window, according to the authors. Nicholas Fang, a study co-author and MIT mechanical engineering professor, said it could be important for big office buildings covered in glass to address the more than 25 percent of indoor heat that comes through windows generally.

"Smart windows currently on the market are either not very efficient in rejecting heat from the sun, or may need more power to drive them," said Fang. "They either work well for summer or winter, but not both."

If every exterior window on a building were covered with the coating, air conditioning and energy costs could drop by 10 percent, according to the paper.

The team developed a film resembling transparent plastic wrap with embedded water-filled microparticles that shrink when exposed to temperatures above 85 degrees Fahrenheit. Above that temperature, the microparticles squeeze out their water and shrink, reflecting sunlight. At lower temperatures, the windows keep heat inside.

The film, which was placed between two sheets of glass, rejected about 70 percent of the heat produced by a solar simulator in its "on" state.

The fact the microparticles keep their spherical shape below a threshold temperature means the window won’t reduce heat at night or during cold stretches, said Fang. The film can also be adjusted to turn "on" at different temperature ranges.

Windows are hotter than ambient air, so the technology currently would start cooling when outside temperatures were lower than 85 degrees, Fang said.

Earlier research demonstrated that microparticles could reject some light, but they couldn’t really cool things down. The MIT group determined previous microparticles were too small and let heat easily pass through, so the scientists expanded the molecular chains.

The high-tech parasol, as it creators dub it, targets a different challenge: providing refrigeration without plugging into an electrical socket.

A separate MIT research team demonstrated directly the device could cool equipment by 11 degrees Fahrenheit below ambient air temperature. New models should be able to reduce temperatures by more than triple that and could be useful in cooling food and medicine entirely off the grid, they said.

"It’s kind of deceptively simple," said Evelyn Wang, an MIT mechanical engineering professor and co-author of a study on the research published this week in Nature Communications. The research was funded by the Department of Energy.

The device consists of an inexpensive plastic film, polished aluminum, white paint and insulation to facilitate the release of heat through radiative cooling when heat radiates back up through the atmosphere into outer space. It’s the same effect observed when heat is observed rising from blacktops after sunset.

Radiative cooling devices have been used before, but usually only at night, since the heat of the sun typically counters their cooling benefits by 10 times.

In the past few years, scientists have developed radiative cooling systems that can perform during the day, but they often were expensive, required complex engineering or were clunky and difficult to manufacture. That’s partly because previous devices attempted to radiate heat and reflect all wavelengths of sunlight at the same time.

The authors say the transformative element here is the "deceptively simple" part, which one scientist called rethinking "usage of shade." In the past, people weren’t thinking shade would be powerful enough to actually cool an object down, said Yichen Shen, a research affiliate and co-author of the paper.

The "parasol" is not really an umbrella, but a disc made of polished aluminum that blocks direct sunlight enough to keep the cooling powers of an inexpensively constructed device intact.

The system exploits the fact that solar radiation in the sky is confined around the sun while it is possible to radiate heat in the atmosphere at all angles, said Bikram Bhatia, an MIT research scientist, in an email.

The researchers have applied for patents and envision an insulated box like a refrigerator with a top that can emit radiation back into space. The top also would have a reflecting band to block direct sunlight.

Along with refrigeration, the device could be used to cool down some types of concentrated solar panels, which can overheat and require cooling systems with pumps and fluids.

Cooling technologies are an active area of research, considering the climate impact. Air conditioning uses about 6 percent of U.S. electricity, according to some estimates.

Recent studies, for instance, announced new plastic-wrap-like materials that attempt to cool off buildings and humans through their clothing (E&E News PM, Feb. 9, 2017).

Like all new innovations, the MIT products have technical limits that need to be ironed out, and their future commercialization potential is uncertain.

One challenge for the parasol is humidity in the atmosphere. In a sticky climate such as Boston, it might cool only 20 degrees Celsius because of humidity blocking the release of infrared emissions. In arid locations including Las Vegas, the cooling power could be double that.

The smart window also turns from transparent to a more translucent or frosted look above 85 degrees, limiting its appeal. Fang said the next step of research is increasing its translucency, so next phases of the film could possibly be used on things like car windshields. With other applications such as sunroofs, full transparency isn’t as important, he said.

Even though the technology is in its earliest prototype, "I can still see through it" when it’s hot, Fang said.