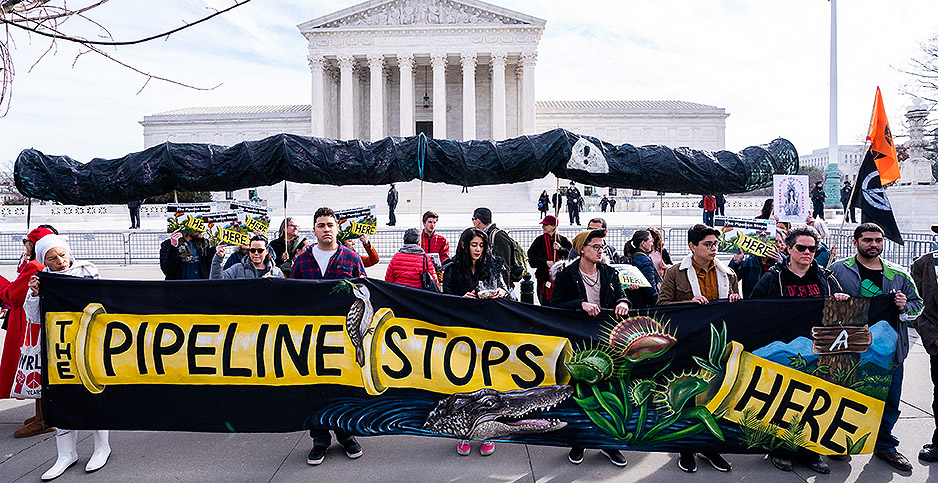 Opponents of the Atlantic Coast pipeline protesting outside the U.S. Supreme Court in February. Developers of the $8 billion natural gas line announced yesterday they were killing the project. Kevin Dietsch/UPI/Newscom

Six years after the massive Atlantic Coast pipeline was announced, its developers are calling it quits. Energy companies Dominion Energy Inc. and Duke Energy Corp. said yesterday they are canceling the multistate natural gas pipeline after a series of legal challenges that brought the project all the way to the Supreme Court.

Dominion and Duke said "ongoing delays and increasing cost uncertainty" contributed to their killing the $8 billion project, which would have traveled from West Virginia across Virginia and into North Carolina (Energywire, July 5).

The pipeline — which developers said would create more than 17,000 jobs during construction — also would’ve traveled under the iconic Appalachian Trail on its 600-mile route. The companies said they remained committed to the project just last month, though it has less than 10% of its pipe in the ground.

Dominion also announced it has reached a separate, nearly $10 billion deal to sell its gas transmission and storage assets to Warren Buffett’s Berkshire Hathaway Inc., marking a major strategic shift away from the fuel for the Richmond, Va.-based utility giant.

Energy Secretary Dan Brouillette slammed activists in a statement yesterday, painting them as enemies of "reliable and affordable energy." He vowed to fight for "expanded energy infrastructure" in the United States.

Pipeline opponents, however, heralded the dissolution of the Atlantic Coast project, which they said would harm the environment and put communities along its route in danger.

Gillian Giannetti, an attorney with the climate and clean energy program at the Natural Resources Defense Council, said Dominion and Duke should now invest more in energy efficiency, wind and solar.

"That’s how to provide jobs and a better future for all," Giannetti said in a statement.

Tom Cormons, executive director of environmental group Appalachian Voices, said the project was "a climate catastrophe and economic boondoggle from the start."

"The smart investment today is in the people of central and southern Appalachia," rather than in fossil fuels, he said.

But project backers — including the Department of Energy, the U.S. Chamber of Commerce and industry associations — expressed frustration at delays due to legal uncertainties and a "broken" infrastructure permitting process.

"Unfortunately, the economic promise of this project is no longer a reality for thousands of Americans in this region," Brouillette said. "Instead, Duke and Dominion have had to make the difficult decision to end this project because it is no longer economically viable due to the costly legal battles they would continue to face."

EPA also weighed in last night, tweeting from its official agency account that the pipeline developers’ permit delays were not tied to EPA permits while bemoaning the loss of the gas project.

"While Duke Energy’s permit delays were not associated with EPA permits, the Agency has made significant progress under the Trump administration clearing inherited backlogs & streamlining processes to ensure more certainty for American companies seeking to develop energy projects," the agency tweeted. "It’s a shame litigation will force Americans to rely more on dirtier imported energy at expense of U.S. jobs."

Marty Durbin, president of the Chamber’s Global Energy Institute, said that although yesterday’s announcement was about the Atlantic Coast pipeline, other projects are also susceptible to "the same level of uncertainty."

"Although the Atlantic Coast Pipeline will not be built, the need remains for ways to move natural gas from West Virginia producers to North Carolina and Virginia consumers who need it, and similar needs exist in other areas around the nation," Durbin said in a statement.

The Interstate Natural Gas Association of America, which applauded the Supreme Court’s decision last month to allow the pipeline to cross under the Appalachian Trail, said Dominion and Duke "worked overtime" to listen to community feedback and build the project in an environmentally sustainable way.

"Consumers, manufacturers and communities that would have benefited from reliable access to clean, domestically-produced natural gas will now need to look elsewhere to meet their energy needs," the group said in a statement.

Still, former Vice President Al Gore and the Rev. William Barber II said yesterday’s announcement is a reminder that front-line communities across the country have the power to stop projects that would harm "the most vulnerable among us." Gore and Barber called the cancellation a victory for environmental justice and for communities of color that have been "systematically deprived of the economic and political power to defend themselves against the fossil fuel industry."

Calling the legal cases "new and serious challenges," Duke and Dominion pointed to the U.S. District Court for the District of Montana’s issuance of an amended injunction in May that halted the use of the Army Corps of Engineers’ Nationwide Permit 12 program for dredge-and-fill activities for new oil and gas pipelines.

The court found the Army Corps had failed to conduct an interagency consultation under the Endangered Species Act. That order came as part of a legal challenge to the use of the permit for the Keystone XL oil pipeline (Greenwire, May 15).

Legal sparring around that decision could now head to the nation’s highest bench.

The Army Corps has asked the Supreme Court to intervene to thaw the freeze while the 9th U.S. Circuit Court of Appeals considers the merits of the Montana decision. The Army Corps and Keystone XL developer TC Energy Corp. are arguing that further delays would drain valuable time and resources.

James Lucier, a managing director at Capital Alpha Partners LLC, said he expects the Supreme Court will stay the lower court’s decision to freeze NWP 12, but not for a matter of weeks or even a month.

Environmental groups hope the legal wrangling will tie up other projects.

Kelly Martin, director of the Beyond Dirty Fuels campaign at the Sierra Club, said that for a long time pipeline companies have used the program to speed up approval of oil and gas projects, but in recent court decisions there’s "a recognition that that’s an inappropriate use of the fast-track permit — the Nationwide Permit 12."

"I think if I was another pipeline builder, I would certainly be taking a good hard look at that one as well," Martin said.

But Lucier said he doesn’t see the fate of the Atlantic Coast pipeline, which was challenged on many fronts, affecting other high-profile cases.

"I think that in general, pipes which are fully permitted and fairly well along are going to get built," he said.

"I think a favorable ruling from the Supreme Court on [NWP 12] will have a positive read-through for the Mountain Valley pipeline, which is nearly done anyway, and the Permian Highway pipeline," he added, referring to two other natural gas transmission projects being built in the Virginias and Texas, respectively.

As for Keystone XL, Lucier said the pipeline will likely only get finished if President Trump is reelected.

In a note to clients, ClearView Energy Partners LLC said the group expects that the Mountain Valley pipeline "can resolve its outstanding permitting issues this summer in order to resume construction and that its current schedule remains feasible."

"We view the cancellation of [the Atlantic Coast pipeline] as a sign of the power that subnational greening can have to arrest energy infrastructure projects," ClearView said, "which require years to successfully permit and construct in the face of increasingly sophisticated and effective opposition from environmental advocates and landowner groups."

‘Writing was on the wall’

In a separate announcement yesterday, Dominion said it has agreed to unload its gas transmission and storage assets to an affiliate of Berkshire Hathaway in a $9.7 billion all-cash sale.

The company expects the transaction to close toward the end of the year. The deal requires federal regulatory approvals, including one from DOE.

Selling the gas transmission and storage segment will boost the company’s long-term financial growth rate by 30% as it concentrates on its regulated electric and natural gas utilities, Dominion CEO Thomas Farrell said in a statement.

"This transaction represents another significant step in our evolution as a company, allowing us to focus even more on fulfilling utility customer needs and positioning us for a bright and increasingly sustainable future," Farrell said.

Energy analyst Rob Rains of Washington Analysis LLC said the "writing was on the wall" for Dominion for some time, and the utility has shown more interest in turning away from big natural gas projects and investing in its electric side.

In addition to the complexity surrounding permitting large interstate natural gas pipelines, Rains pointed to a new state law in Virginia that makes it more difficult for utilities to pass on the cost of gas pipeline capacity to electric ratepayers. Yet another law, the Virginia Clean Economy Act of 2020, calls for 100% clean energy by 2050.

"The company clearly values electric investments right now, so getting out of building a large, unwieldy gas pipeline that they probably wouldn’t have been able to recover their costs overrules through rates could have lifted an albatross from around their neck," he said.

The shift comes at a time when Dominion continues its transition away from fossil fuels and toward its net-zero carbon goal by 2050. This includes plans to quadruple renewable energy development in its home state to comply with Virginia’s landmark clean energy law (Energywire, May 5).

The company plans to spend up to $55 billion to meet that goal.

"Given the bend towards decarbonization efforts in the country, the move away from natural gas, and investor demand for more simplified utility structures, we believe this is the correct move for Dominion to make," analysts with Guggenheim Securities LLC said in a research note last night.

Meanwhile, Duke issued a news release saying it had not backed away from its clean energy goals despite canceling the pipeline. Duke and its home state of North Carolina have net-zero carbon goals by 2050.

That plan includes adding natural gas with the idea that the company will be building only "peaker" plants after 2030, Duke’s climate report said.

The company told investors in February it was beefing up its capital spending program to $56 billion, citing "rapidly expanding" infrastructure needs.

Duke said it wants to create a resilient and smarter grid that can support a transition to cleaner energy sources (Energywire, Feb. 14).