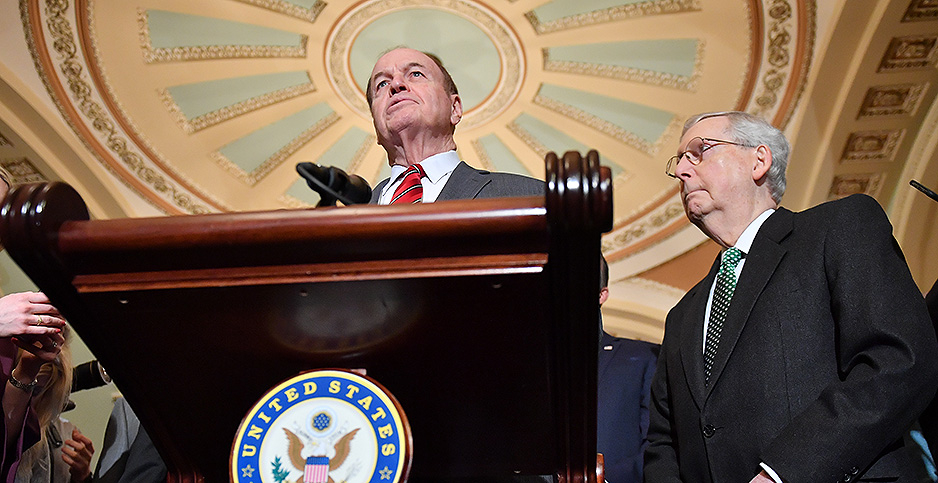 (Left to right) Senate Appropriations Chairman Richard Shelby (R-Ala.) and Majority Leader Mitch McConnell (R-Ky.). Both are trying to pass as many spending bills in the coming weeks as possible. Kevin Deitsch/UPI/Newscom

Congress hopes to make progress on spending bills this week even amid concern that the growing rancor over impeachment could leave agencies operating at current levels well into next year.

The Senate is on track to back an Interior-EPA spending bill by largely sidestepping potentially contentious fights over environmental and land policies.

The chamber will continue debate today on a four-bill spending package that contains the fiscal 2020 Interior-Environment, Commerce-Justice-Science, Transportation-Housing and Urban Development, and Agriculture measures. More than 150 amendments have been filed, but only a handful are likely to receive votes.

Interior and Environment Appropriations Subcommittee ranking member Tom Udall (D-N.M.) said last week that he and Chairwoman Lisa Murkowski (R-Alaska) will look closely through the amendment offerings to see if they can assemble a bipartisan manager’s amendment.

The pair will be looking for bipartisan amendments that are "not going to upset the apple cart," Udall told E&E News last week. That includes any "poison pill" riders, he added.

In a floor speech, Udall said he would look to conference talks with the House to boost funding for the Land and Water Conservation Fund. "I know many hope we can do better on LWCF funding and so do I," he said.

While the Senate’s Interior-Environment bill does not include new policy riders, Udall indicated he will look to the conference to strip some provisions from the Senate bill he opposes, including language he said would "weaken efforts to protect the sage grouse."

Sen. Lamar Alexander (R-Tenn.), chairman of the Senate Energy and Water Development Appropriations Subcommittee, said his panel’s bill will be paired with military funding legislation in a second spending package.

"I wish it were coming up with this first package. It’s not, but it will be in the next one," Alexander said last week.

Shelby said moving the Senate’s first batch of bills may help improve stalled talks on negotiating 302(b) spending allocations with the House.

"We’re mindful of it," he told reporters last week. "We’ve discussed some of it. We haven’t been able to move on it right now. I’m hoping it’ll all come together some time. It usually does."

The House has passed 10 of the 12 annual spending bills; the Senate has yet to move any, largely as the result of a lack of an agreement on allocations.

Shelby also said another short-term continuing resolution will be needed to prevent a government shutdown when the current stopgap funding measure expires on Nov. 21.

"Unless a miracle happens around here with the House and the Senate, we will have to come forth with another CR and the question after Nov. 21 is how long?" he told reporters.

If the House votes on articles of impeachment, forcing a Senate trial, a CR would "probably be more than a week, 10 days," he added.

Asked if a CR could last through February or March, Shelby responded "that’s probably in the ballpark."

Rep. Tom Cole (R-Okla.), a senior House appropriator, worries Congress could become so gridlocked over impeachment that it might pass a CR for the entire fiscal year.

While Cole said a CR would be preferable to a shutdown, he warned it would still hamstring agencies expecting increases to start or expand programs.

Among the amendments pending to the current Senate package are: