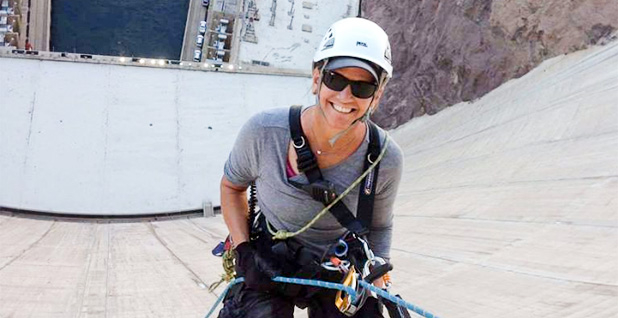 Adept on the rocks, Hinson joined the National Park Service in 1993 as a seasonal ranger at Yosemite National Park. The department lauded her job performance, honored her for cliff-hanging rescues and promoted her to head a unique law enforcement agency.

And all the while, Hinson says, she endured discriminatory behavior.

Hinson felt compelled to retire in November 2016. The agency she once headed, the Hoover Dam Police Department, has been disbanded. Hinson is working at a fitness center, still trying to make sense of the conduct, which she believes is all too common.

"Gender discrimination is systemic throughout the Department of Interior," Hinson said, adding that "the few supervisors I had who recognized the harassment did not possess the knowledge, skills or abilities to properly address the situation."

Hinson’s complaints about alleged retaliation at the Hoover Dam Police Department sparked an Office of Inspector General investigation. A redacted copy of the previously unreleased 17-page report was obtained by E&E News under the Freedom of Information Act.

Reached via telephone by E&E News, Hinson agreed to discuss her case publicly for the first time; the questions and answers were conveyed by email.

"I am actively recovering from this horrible situation," Hinson stated, adding her hope that, by her going public now, "others may be empowered to speak up."

Interior officials say they are working to correct institutional shortcomings, which have been revealed both anecdotally and in surveys.

Thirty five percent of Interior employees surveyed last year said they had been subjected to some form of harassment or discrimination during the previous year based on age, gender or other factors, according to a report commissioned during the Obama administration. Officials have instituted new training and reforms (Greenwire, Dec. 14, 2017).

Only one-quarter of the Interior employees who say they experienced gender-based harassment or discrimination said they filed a complaint. When asked why not, 41.7 percent explained they thought they "would be labeled as a troublemaker."

Even more, 46.5 percent, said they didn’t report the alleged gender-based harassment or discrimination because they "did not think anything would be done" (Greenwire, Dec. 15, 2017).

Interior Secretary Ryan Zinke has declared that a "zero-tolerance" policy will be enforced against discrimination and harassment.

"Reclamation Commissioner Brenda Burman, the first woman to be confirmed as Commissioner in Reclamation’s 115-year history, enforces this important secretarial priority and ensures a culture of respect and safety among Reclamation employees," Reclamation spokeswoman Patricia Aaron said in a statement.

The redacted IG report obtained by E&E News did not directly evaluate Hinson’s gender discrimination complaints and did not state an explicit conclusion about her charges of retaliation, but it did raise questions about how supervisors treated her.

"We didn’t do our due diligence, if I could be very blunt and honest about it," one supervisor told investigators, according to the report. "I think we just didn’t handle it properly in terms of her performance."

Dated Nov. 1, 2017, the report blacks out the names and positions of the individuals involved, but it notes that her supervisors denied any retaliation.

"Both managers … stated that her complaints had no bearing on their decision to remove her, and that the action was based on performance issues," the report says.

Hinson explained that it was her "technical rock climbing skills" that first got her hired by the Park Service. She was an active, helicopter-rappelling member of the Yosemite Search and Rescue team, and in 2000 she received two Interior Department valor awards for dicey rescues made the year before.

"She’s incredibly skilled," Yosemite spokesman Scott Gediman said in an interview. "I know that repeatedly she’s put her own life at risk in order to save other people."

Hinson, Gediman added, had a reputation as a "consummate professional" and a "ranger’s ranger."

In 2006, following service in other parks including Grand Canyon, Hinson was promoted to be chief ranger at the heavily visited Lake Mead National Recreation Area. Eight years later, the Bureau of Reclamation recruited her in May 2014 to serve as chief of the Hoover Dam Police Department.

"The men and women who worked for the department had a unique skill set that allowed them to recognize threats while providing for the safety of employees and visitors," Hinson recounted. "These officers prided themselves on protecting a national icon and genuinely wanted to be there."

Hinson’s promotions that led her atop the Hoover Dam department, though, came at a cost, she said.

"As I moved up the ranks, the discrimination became more intense and subversive," Hinson stated.

According to investigators, Hinson "made at least three complaints of gender discrimination and hostile work environment" between June 28 and Oct. 12, 2016. About six weeks after her first complaint, Interior officials reorganized the day-to-day management of the Hoover Dam department. The officials knew about Hinson’s complaint, investigators noted.

Hinson said the reorganization caught her by surprise and reduced her role to that of a mere administrative assistant.

"She stated that she was marginalized because she was a woman," investigators recounted.

Although redactions render the full account hard to follow, the IG report tells of "increasing frustration" and "poor communication issues" and other problems that, as one official put it, "could [have] caused, if not chaos, certainly misunderstandings" within the Hoover Dam department.

A supervisor in October 2016 eventually suspended Hinson’s law enforcement credentials and ordered her to turn in her gun and badge, citing "a pattern of repeated poor judgment and decision-making."

Investigators, though, noted Hinson had never been disciplined or counseled for deficient performance, and they called into question some of the specific reasons given for her suspension.

"I was forced to retire after I was publicly humiliated when my law enforcement credentials were wrongfully suspended due to an apparent ‘lack of faith’ in my ability to perform my duties," Hinson said.

One stated reason, for instance, was Hinson’s supposed responsibility for a non-working vehicle barrier on the Arizona side of the dam.

One official, however, acknowledged to investigators that "the barriers have been an issue at Hoover Dam for years," while another official with Reclamation said "the barriers are a maintenance issue and should be corrected by maintenance staff, not the police department."

The department was disbanded last Oct. 1, about 11 months after Hinson’s retirement, and its employees were placed in other Interior jobs.

"Our law enforcement needs at Hoover Dam changed over the past few years," Aaron said, adding that an evaluation also examined "recruitment and retention of officers, and our excellent long-standing partnership with the National Park Service’s Lake Mead National Recreation Area."

While with Lake Mead NRA, Hinson represented the Park Service during the April 2014 standoff with the Bundy ranching family. Her subsequent testimony revealed that a live video feed of the Bundys’ home was broadcast into the Bureau of Land Management’s command center during the standoff near Bunkerville, Nev. (E&E News PM, Nov. 7, 2017). That revelation prompted the federal judge to delay the trial, which was eventually dismissed.