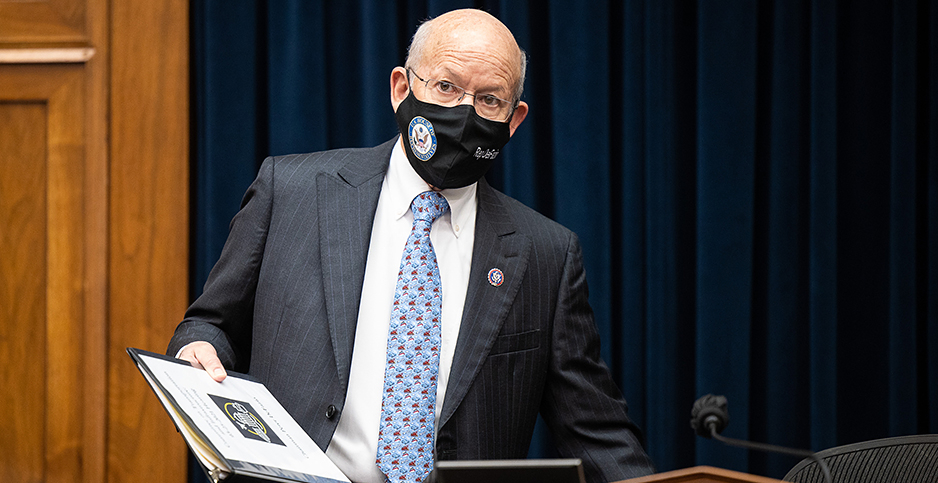 All House members will have the chance to direct up to $20 million in earmarks for infrastructure projects in the upcoming surface transportation authorization bill due to be unveiled next month, a top House Democrat told E&E News.

Transportation and Infrastructure Chairman Peter DeFazio (D-Ore.) said this week: "Every member of Congress, from me — the chairman — down to the freshmen, will get the same amount. It will be between $15 million and $20 million."

He called the overall level of earmarking in the bill — which could reach $8.5 billion if all members take their share — as "pretty insignificant" for a measure that’s expected to cost several hundred billion dollars.

This year will mark the first time in 15 years that the five-year authorization bill will carry the directed spending.

The Oregon Democrat stressed he would not condition earmarks on members supporting the overall legislation, as has been the case in the past for some earmarked bills.

"I’m not going to say, ‘Well, if you don’t vote for the bill your project’s out.’ That’s bullshit. I’m not doing that," he said.

DeFazio made the comments, some of his most expansive thus far on how he will handle earmarks, following a T&I Committee hearing this week where more than 60 House lawmakers made their pitches for projects they want earmarked in the upcoming surface transportation bill.

The veteran legislator said he believes giving more members a say in crafting the legislation will build bipartisan support — a top priority for the White House.

"It just might be if people see that they can bring something home, they’ll be more willing to support a few things they don’t like," he said.

While the hearing was bipartisan, the vast bulk of the members appearing were Democrats, a signal that Republicans who only reluctantly have embraced a return to earmarking are moving cautiously.

Top T&I Republican Sam Graves of Missouri is on board with the return of earmarks but echoed the GOP caution, saying, "We ultimately want to work together on a bipartisan bill as much as possible, but that does require commitment from both sides."

DeFazio — who uses the term "member-designated projects" — said strict guidelines are in place for how lawmakers can request earmarks to avoid conflicts of interest and ensure equitable distribution.

He said the rules are similar to those he proposed for a 2009 transportation reauthorization bill that was ultimately scrapped.

A 16-page guide on the committee’s website stresses that the best way to secure dollars is to make requests already eligible for federal funding or part of state and local transportation improvement plans.

The document notes the earmarks in the bill are separate from the annual transportation appropriations. Highway bill spending will come from Highway Trust Fund withdrawals.

Lawmakers are required to submit their requests electronically and make them public on their official website. They also must answer 26 questions explaining the scope and size of the project, certify they are going to public or nonprofit entities, and vow that neither they nor any family members have a financial interest in the project.

The key difference is members are only allowed 10 requests across all 12 spending bills. For the surface transportation measure, a member can make unlimited requests but must rank their top five.

Speaker Nancy Pelosi (D-Calif.) said yesterday she wants T&I to complete work on the bill by the end of May. The legislation would then be combined with other bills moving through committees to form a massive infrastructure package that House Democrats want to pass by July 4.

While the House is moving ahead with earmarks, Senate Democrats have not committed to doing the same.

Senate Environment and Public Works Chairman Tom Carper (D-Del.) said no decision has yet been made on whether earmarks will be permitted in the Senate bill also expected to be marked up in May. Carper, however, signaled it may be time to end the ban with new earmark limits in place.

"I think we have a chance to do earmarks right, and some of the reforms I’ve heard make a lot of sense," said Carper, noting he favors requiring earmarks to have wide support at the state and local level rather just the support of a single lawmaker.

Carper also said that "there is probably some truth" to the idea that reviving earmarks in the surface transportation bill could help it gain bipartisan backing.

West Virginia Sen. Shelley Moore Capito, the ranking Republican on EPW, said she remains undecided on earmarks, saying, "If they are going to be there, we need to make them equitable."

One sign EPW is moving toward earmarks is the committee already has asked all senators to submit ideas for infrastructure projects they would like to see in the bill. It made the request, though, without making any commitment to funding them.

Jeff Davis, a senior fellow at the centrist Eno Center for Transportation, said that even if the Senate does not include earmarks in its initial bill, they’ll likely wind up in the final version.

He noted that in 2006, the Senate bill did not, at first, have earmarks, but lawmakers added them during conference talks with the House.

Without many restrictions, Davis said, infrastructure earmarks exploded from the 1980s, when President Reagan once vetoed a transportation bill with a few hundred, to the last earmarked measure in 2006 that contained several thousand.

The 2006 bill was estimated to contain 5,091 earmarks worth $14.8 billion, and those were not evenly split among members.

"Each member was told how much they would get [by leadership], and they were able to divide that up among their projects as they saw fit," said Davis, who said that too often led to lawmakers spreading funding over multiple projects and leaving many short the dollars needed to be completed.

Susan Howard, the program director for transportation finance at the American Association of State Highway and Transportation Officials, said state and local officials became frustrated that earmarks were leading to chronic underfunding of infrastructure.

For example, she said, a proposed $10 million project might only get a $500,000 earmark, and state and local governments would not be able to make up the difference. In many instances, money was provided for projects that were not a priority, she added.

Howard said that in recent years, Congress has approved several provisions to take back millions of dollars for transportation earmarks that were never used.

She said she is hopeful the new guidelines will allow lawmakers to better target their earmarks to projects sought by state and local transportation officials.

AASHTO, which is neutral on earmarks returning, said in a recent letter to members: "Each earmarked project should have sources of funding identified for the cost of the entire project along with letters from all entities committed to funding the project indicating they are capable of doing so."

Earmarks for the early party of the last decade were less popular than an Ethics Committee investigation on Capitol Hill.

But in recent years the tide turned as a new generation of House lawmakers is mostly unfamiliar and unconcerned with the earmark scandals of the past.

More than 350 members have joined the House with earmark bans in place. Those newer members are eager to use earmarks to have a say in spending decisions and show they can bring dollars home.

"I’m a junior member, I’m not on Appropriations or inside the room when maybe some of the decisions are made. But I can tell you we are going to put our best foot forward for our projects," said Rep. Mike Levin (D-Calif.).

Levin used the T&I hearing this week to make the case for earmarking federal funds to move a rail line away from coastal bluffs in his Southern California district that have been eroding and, in some cases, collapsing due to rising sea levels.

Veteran lawmakers, although aware of past scandals, say the prohibition went too far and left most members out of the loop in transportation funding decisions.

Senior appropriator Marcy Kaptur (D-Ohio), who appeared at the hearing to press for more money for local transportation agencies in northeast Ohio, said, "I think the executive branch got too much power, so now we have to reclaim some of our own."