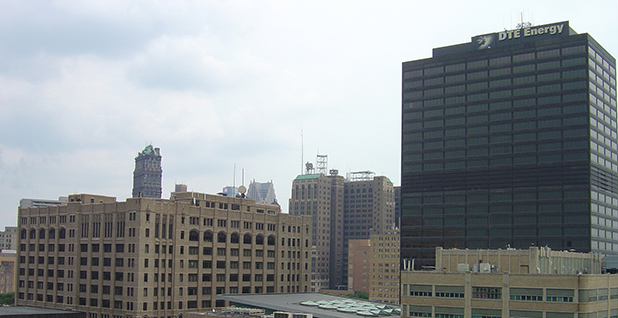 DTE Energy Co. has dropped out of an electric industry trade group tied to EPA air chief Bill Wehrum’s former law firm, adding to a list of more than a half-dozen power producers that have confirmed their withdrawals in recent days.

"DTE Energy has determined that its continued participation in Utility Air Regulatory Group (UARG) no longer serves the company’s purpose," Peter Ternes, a spokesman for the Detroit-based utility, said in an emailed statement to E&E News late yesterday.

While DTE had been an UARG member since the 1970s when EPA began developing air quality rules that often targeted coal-fired power plants, the firm now meets or exceeds those standards and is on track toward an 80% cut in carbon emissions by 2040, Ternes said.

"As the company winds down coal," he added, "we view our continued participation as not aligned with our company’s priorities."

DTE’s decision, made yesterday, comes as congressional Democrats are stepping up scrutiny of the group, based at the firm now known as Hunton Andrews Kurth LLP. Wehrum was a partner there before rejoining EPA in November 2017 to head the Office of Air and Radiation.

The group has been a frequent combatant in legal challenges to EPA air regulations; since 2001, UARG is listed as a party in some 200 lawsuits, according to federal court records. Because UARG has traditionally not disclosed its membership roster, critics in the environmental community view it as a front for utilities to covertly contest air quality rules.

Now, one focus of congressional investigators is EPA’s decision in late 2017 to end enforcement of a key aspect of its New Source Review pre-construction permitting program.

DTE had spent years in an unsuccessful court battle over the program’s applicability to a power plant upgrade. In the December 2017 memo reversing the agency’s previous enforcement posture, then-EPA Administrator Scott Pruitt acknowledged the connection to that litigation.

In a letter to DTE last week, House Energy and Commerce Committee Democrats asked the company to turn over all documents and communications related to Pruitt’s memo, along with a host of other records.

Asked whether such inquiries contributed to DTE’s withdrawal from UARG, Ternes reiterated that the decision stemmed from its "progress on clean air emissions." The company "will work with the committee in good faith and provide information," he said.

At TVA, spokesman Jim Hopson said that the publicly owned utility finds participation an important source of information and analysis on air regulations but that the terms of its membership bar the use of dues money for lobbying or litigation.

But two other major utilities, Duke Energy Corp. and Dominion Energy Inc., had already confirmed that they are out. "We evaluate our memberships in a number of organizations every year, and chose not to renew on this one," David Botkins, a spokesman for Virginia-based Dominion, said in an email this morning. Also departed is South Carolina Electric & Gas Co. (SCANA), which Dominion acquired in January, he confirmed later.

At Duke, headquartered in Charlotte, N.C., spokeswoman Shannon Brushe also portrayed the company’s decision to leave UARG as a consequence of its planned shift away from coal-fired generation. The company made the decision last month, Brushe said in an email yesterday.

As Duke "transforms for a smarter energy future and transitions our generation fleet, we continuously assess our membership in industry groups to ensure that they support our customers’ expectations for reliable, affordable and increasingly clean energy," she said. "During this review, we ceased our membership with UARG."

Politico first reported the defections of Duke and Dominion after previously releasing an internal UARG document that revealed the group’s membership and dues structure for 2017. The news outlet also reported today that Indiana-based NiSource Inc. has withdrawn, and spokespersons for Consumers Energy, Kansas City Power and Light Co., and Minnesota Power later told E&E News that those companies have left, as well. Together, the eight power producers accounted for more than a quarter of UARG’s $8.2 million budget for that year, the document indicates.

In an interview today, NiSource CEO Joe Hamrock cited several factors in analyses as the company plans to shift away from coal toward renewables as a fuel source.

With UARG, he said, the "level of advocacy and engagement" became less important to NiSource.

The decision on UARG was made around the beginning of the year, Hamrock said. Asked what he would say to environmental critics who might question NiSource’s previous support for UARG, he replied: "Important to make sure we had sound" and "reasonable policies around such an important part of our economy and an important part of our supply portfolio."

Pallone is also seeking a host of records from Hunton; neither the firm’s managing partner, Wendell Taylor, nor Makram Jaber, an attorney who frequently represents UARG in litigation over air pollution regulations, replied to an email this morning seeking comment on those companies’ departures.

Because Wehrum had also represented UARG while at Hunton, he is barred from involvement in any specific matter involving the organization until this November, according to his recusal statement.

But Wehrum has stayed in touch with the group; as E&E News first reported last year, he returned to Hunton’s offices soon after taking the EPA job to discuss power plant regulations at a gathering where UARG was represented (Greenwire, June 13, 2018).

While UARG is a frequent litigant, how it decides which regulations to challenge is unclear. Among the group’s members, for example, is the Edison Electric Institute, according to the UARG documents disclosed by Politico.

The institute, which represents investor-owned utilities, is part of a power industry coalition now urging EPA to scrap the current version of its proposal to repeal the "supplemental finding," which buttressed its original decision to limit emissions of mercury and other hazardous pollutants from coal- and oil-fired generating plants.

UARG, meanwhile, remains a plaintiff in pending lawsuits before the U.S. Court of Appeals for the District of Columbia Circuit that — like the EPA proposal — seek to overturn the supplemental finding. In an interview earlier this year, Emily Fisher, EEI general counsel, said that the institute is a nonvoting member of UARG that doesn’t get involved in litigation decisions.

EEI has a much larger membership than UARG, Fisher said. While the institute has traditionally turned to UARG for technical support, she said, "our positions are our positions."