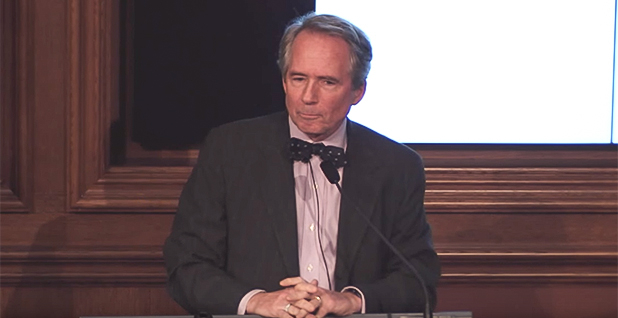 A group funded by conservative foundations to promote doubt about the effects of climate change has quietly expanded its outreach in Congress over the last few months.

Yesterday, the CO2 Coalition held a briefing for congressional aides to claim that rising levels of carbon dioxide are falsely stigmatized. The group argues that more CO2 is beneficial to humans through the promotion of plant growth and crop yields.

The presenter was Craig Idso, a researcher whose work has been funded by the Mercer Family Foundation, a major Trump donor, and who is affiliated with the Heartland Institute, a group that discredits climate science. Idso told an audience of legislative interns and committee staffers that CO2 levels of 600 parts per million would be beneficial to humankind, a claim contradicted by NASA, NOAA and the world’s major science agencies.

The event was part of the CO2 Coalition’s effort to have a bigger presence on Capitol Hill, said Caleb Rossiter, the group’s executive director, in an interview.

"We’re trying to be up here as much as possible and take people like Craig around to talk to people who are interested. I hope you’ll see us a lot more," said Rossiter, who has a doctorate in statistics.

The group’s efforts come as public opinion is shifting on climate change, including among Republicans. Polls show that Democratic voters increasingly rank climate change as a top issue heading into the 2020 presidential election. And a growing number of Republicans are worried about climate change after seeing a string of extreme storms and wildfires strike states across the nation, surveys show.

The Trump administration released the latest National Climate Assessment in November, which showed that parts of the country are already experiencing the disastrous and deadly effects of rising temperatures. They include wildfires, severe storms and heat waves. The CO2 Coalition is trying to counteract that public shift and has received a friendly reception from some GOP lawmakers.

Rossiter said his group is targeting first- and second-term lawmakers who may not have hardened climate opinions, "because they’re up for grabs." His group tries to help lawmakers highlight uncertainty, while avoiding an outright rejection of science.

"I just want you to look at the data and say this is how much temperature change we’ve seen versus this is how much is predicted, this is how many hurricanes we’ve had per decades versus beliefs that it has gone up, etc.," Rossiter said. "Don’t go past that because it’s such an uncertain system. Why make yourself look silly?"

Scientists at NASA and elsewhere have said that climate models have tracked closely to real-world observations in recent decades. The last five years have been the warmest on record, according to NASA.

The CO2 Coalition was co-founded by William Happer, an emeritus physics professor with Princeton University who has sought to discredit climate science for years. The group receives funding from the Mercer family, the Koch network and foundations that support conservative causes, E&E News has reported (Climatewire, Feb. 28). Happer was appointed to the White House National Security Council by President Trump and is now leading an effort to conduct an "adversarial" review of climate science.

The presentation yesterday could reach a wide variety of lawmakers. In attendance were staffers for Sens. Roger Wicker (R-Miss.), Jim Inhofe (R-Okla.), Maria Cantwell (D-Wash.) and Rep. Gary Palmer (R-Ala.). Representatives for the American Farm Bureau Federation, the Senate Agriculture Committee and the House Select Committee on the Climate Crisis were also there.

One legislative staffer said he was a little less concerned about the dangers of rising carbon dioxide levels after hearing the presentation.

"I’m now maybe slightly less concerned about increasing CO2 levels. I’m still not convinced that that’s not an issue that something needs to be done about," said Sean Bland, a staffer in Wicker’s office, who said he was speaking for himself. He said he would distill a few talking points from the presentation and submit them to his supervisor in the senator’s office.

Rossiter said he plans to brief more members of Congress in the coming months. His group has already briefed at least eight lawmakers, he said, including Reps. Paul Gosar (R-Ariz.) and James Comer (R-Ky.). The meetings can give lawmakers talking points to be used in climate hearings conducted by Democrats.

On Tuesday, at a House Oversight Committee hearing on the public health risks of climate change, Comer had some of those talking points ready to go.

Comer, who represents coal-producing regions of Kentucky, repeated some of the talking points used by the CO2 Coalition in his opening statement. He said he wanted to talk about the "role that coal would play in helping more Americans escape poverty and maintain a higher state of health and well-being."

Rossiter, who testified at the Tuesday hearing, said increased fossil fuels would bring wealth to the world and claimed that fossil fuels had saved lives.

"So far, CO2 emissions have had a modest, positive impact on public health in the United States: They have increased plant productivity because CO2 is plant food and reduced mortality because CO2 has contributed to warming," Rossiter told lawmakers.

"The allergy season is longer, the trees are flowering more, we’re having more vibrant flowering of all trees, which then quickly creates more asthma and more allergies and then that causes a tremendous increase in cost," said Cheryl Holder, a physician and associate professor at Florida International University.

Aaron Bernstein, director of the Climate Change & Health Initiative at Harvard University’s Global Health Institute, corrected Rossiter’s claims, saying they were cherry-picked and not the entire truth about climate change.

"What you heard does not reflect the full truth as regards to what the science understands," Bernstein said.