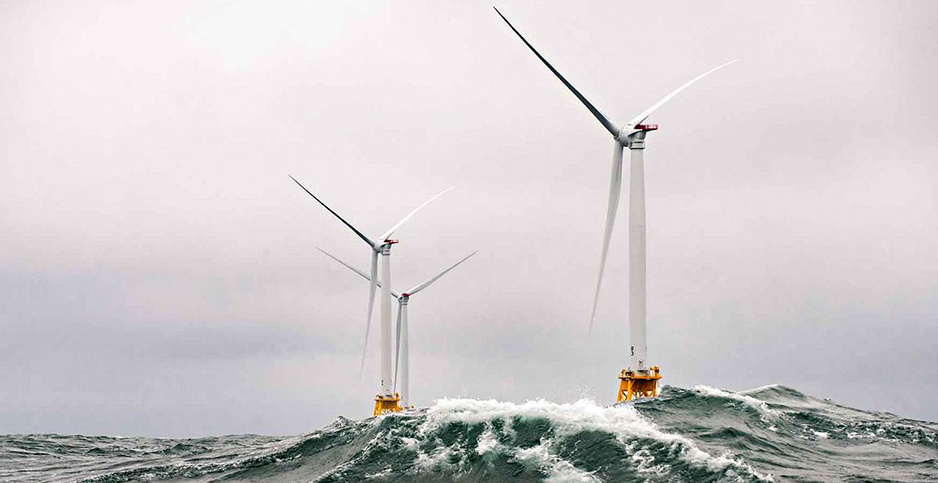 Offshore wind projects could be delayed because of legislative language in a spending bill. The Block Island Wind Farm is seen off the coast of Rhode Island. Dennis Schroeder/National Renewable Energy Laboratory

Offshore wind developers are up in arms over a provision inserted into the Defense appropriations bill earlier this week requiring the Pentagon to study the impact of turbines on military radar and sonar.

The American Wind Energy Association labeled the study "duplicative" in a statement yesterday, while the National Ocean Industries Association warned that it "threatens to derail" the nascent industry.

The outcry follows the House Appropriations Committee’s passage of a nearly $690 billion Defense spending bill Tuesday. Included in the legislation was a requirement that the secretary of Defense submit a study of "any potential national security concerns with respect to the construction of offshore wind arrays, to include an examination of legacy and new turbines, and any appropriate mitigation measures that should be implemented to address these concerns."

An amendment carrying the language said, "The Committee recognizes that wind turbine structures, particularly when arranged in large arrays, may cause interference to standards and that vibrations generated by the operation of turbines may cause sonic interference to underwater sonar."

The origin of the language wasn’t entirely clear. The Defense Department did not respond to a request for comment. A spokesman for the committee’s chairwoman, Rep. Nita Lowey (D-N.Y.), said the committee doesn’t "discuss the origin of report language."

"This is report language that requires the Defense Department to submit a report and does not have any effect on ongoing offshore wind development," said Evan Hollander, a spokesman for the committee.

Wind industry officials said they suspected that Rep. Andy Harris (R-Md.) was the provision’s author. Harris, a member of the Appropriations Committee, represents Maryland’s Eastern Shore and has emerged as an outspoken opponent of offshore wind development in recent years.

In a statement, the congressman did not claim responsibility for the provision but said, "I agree with the Committee Report language — we need to be absolutely certain we are not impairing defense capabilities as we consider the advisability of further development of offshore wind in the Mid-Atlantic area. Several reports and studies indicate there may be serious national security concerns."

A spokesperson for Harris did not respond to follow-up questions.

Supporters of offshore wind expressed surprise at the budget language and promised to fight it.

"All proposed offshore wind developments must already consider any national security implications, and to date, none have been raised as New England begins to build turbines off of our coast that can power homes and employ a new generation of workers," said Rep. Joe Kennedy III, a Massachusetts Democrat who has championed the industry. "Any effort to delay the permitting process and deployment of offshore wind turbines is deeply troubling and I will work with my colleagues to address those concerns."

The offshore wind industry has emerged as a central tenet of Northeastern states’ attempt to green their power sectors, meet their climate goals and drive new investments in aging ports in recent years.

New York has set a goal of developing 9,000 megawatts of offshore wind, or roughly a fifth of the state’s current installed power generation capacity, by 2035. Connecticut recently passed a bill calling for 2,000 MW of offshore wind by 2035. Rhode Island is home to the country’s first offshore wind farm and a 30-MW facility near Block Island, and has plans for 400 MW of further development.

In some respects, Massachusetts and Maryland are furthest along. Vineyard Wind LLC, a partnership of Avangrid Renewables and Copenhagen Infrastructure Partners, is set to begin construction on an 800-MW project south of Martha’s Vineyard later this year. The Bay State plans to generate 3,200 MW of offshore wind energy by 2035.

A Vineyard Wind spokesman said the company did not have sufficient information about the proposal to comment on the bill.

Maryland, meanwhile, has approved subsidies for two offshore projects with a combined capacity of 368 MW.

Concerns over radar have animated debate over wind developments in other regions but have been only a fleeting issue in the Northeast. The Defense Department has raised concerns over two leasing areas off the California coast (Energywire, Feb. 27). And North Carolina lawmakers imposed an 18-month moratorium on new wind development in 2017 out of concern over onshore wind development’s impact on military operations in that state. The Navy ultimately rejected those concerns (Climatewire, Jan. 18, 2017).

Tom Kiernan, CEO of the American Wind Energy Association, said in a statement that the congressional language appeared to ignore the existing regulatory process. The Department of Defense already has input in the areas leased by the Bureau of Ocean Energy Management, a division of the Interior Department that oversees offshore wind development.

"The offshore wind industry is committed to compatibility with national security and wind projects are rigorously vetted under existing law by DoD, DOI and other agencies," Kiernan said, adding that "these bills needlessly impose duplicative requirements on the DoD that single out offshore wind, creating uncertainty that puts America’s clean energy future at risk."

The language in the Defense spending bill appears designed to sow conflict between the offshore energy industry and the military, said Randall Luthi, president of the National Ocean Industries Association.

"For decades, offshore wind developers and the U.S. military have worked in tandem with our NATO allies in the North Sea alongside offshore wind turbines," Luthi said. "That same collaboration can happen in the United States if Congress will stop giving in to conspiracy theories suggesting that wind energy cannot coexist with other industries and military operations in the [outer continental shelf]."

Correction: An earlier version of this story misstated the amount of the Defense spending bill approved by the House Appropriations Committee.