Déjà vu as Congress tries to head off shutdown 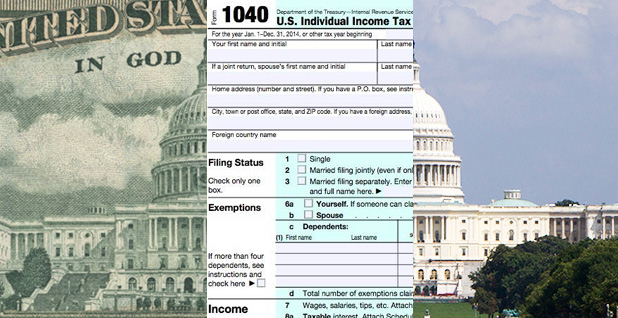 Congress must pass spending legislation in the coming days to avoid a government shutdown. Republican lawmakers are also focused on reviving health reform talks, a move that is delaying tax negotiations. Photos courtesy of Wikipedia, the Internal Revenue Service and Ed Uthman/Flickr (Capitol).

Congress returns this week to confront its latest funding crisis, one it will have to resolve by late this week or face an embarrassing government shutdown.

"The spending bill to fund the government through Sept. 30 obviously is one that cannot be done by one party alone," said Senate Majority Leader Mitch McConnell (R-Ky.) at the start of recess. He added that he was "optimistic" bipartisan agreement would emerge.

Both parties say Appropriations staff made progress over the last two weeks toward a final spending package for fiscal 2017, and Senate Minority Leader Chuck Schumer (D-N.Y.) told reporters over the break that negotiations were largely positive, although he warned the White House to stay out of the talks.

"If the president doesn’t interfere and insist on poison pill amendments to be shoved down the throat of the Congress, we can come up with an agreement," Schumer said Tuesday.

Mulvaney has said that funding for Trump’s border wall with Mexico and more immigration agents are top administration priorities.

"We know there are a lot of people on the Hill, especially in the Democratic Party, who don’t like the wall, but they lost the election," he told the Associated Press. "And the president should, I think, at least have the opportunity to fund one of his highest priorities in the first funding bill under his administration."

On Friday, White House press secretary Sean Spicer was less resolute about the wall. "I don’t know that I’d say it’s a sticking point; it’s a priority," he said about spending talks. Asked about the possibility of a shutdown, Spicer expressed a "strong" belief there would not be one.

Mulvaney on "Fox News Sunday" said: "We’ll negotiate with the Democrats. The negotiations are not finished yet. We think we have given them a reasonable set of choices that they want in exchange for what we want."

On ABC News’ "This Week," Attorney General Jeff Sessions said, "I can’t imagine the Democrats would shut down the government" over making a "down payment" on the border wall. But then he said, "I’m not engaged in the budget negotiations."

Schumer has said lawmakers should debate immigration issues, including funds for the border wall, when discussing fiscal 2018 spending. But Mulvaney has talked about giving Democrats some of their wishes, like continuing certain subsidies under the Affordable Care Act. Trump has threatened to end the payments in a bid to force the minority to negotiate on changes to the law.

Still, Schumer spokesman Matt House blamed the White House for disrupting the spending negotiations. "Everything had been moving smoothly until the administration moved in with a heavy hand," House said in a statement.

Echoing previous Democratic statements, he said last week, "Not only are Democrats opposed to the wall, there is significant Republican opposition as well."

Another obstacle to a funding deal is the ongoing push by Sen. Joe Manchin (D-W.Va.) and other coal state lawmakers to include a fix to imperiled United Mine Workers of America health and pension benefits in whatever deal emerges.

The brinkmanship on various issues increases the likelihood that a short-term continuing resolution, perhaps lasting a week or two, will be needed to give lawmakers more time to reach a long-term accord.

It’s a familiar situation for lawmakers who have operated on a regular cycle of CRs in recent years as they have struggled to finalize year-end appropriations packages.

This year is particularly challenging. Congress punted on finishing 11 of 12 fiscal 2017 spending bills knowing it would have to deal with a new administration’s agenda — including a host of nominees — and make headway on fiscal 2018 work.

Congress is now hoping for a deal that would fund as many of the remaining 11 bills as possible. But the measure to fund the Interior Department and U.S. EPA remains, as usual, particularly thorny, along with bills for labor, health and education.

Holding up the environment spending bill is GOP insistence on cutting EPA funding for the rest of this fiscal year, a move Democrats continue to resist. They are also against shots at climate policies.

Last month, the White House proposed $18 billion in fiscal 2017 cuts, including $1.75 billion from the Energy and Water Development bill and $714 million from the Interior-EPA one.

Senate Democratic sign-off on spending is crucial because the deal will need 60 votes to overcome the threat of a filibuster. Republicans control only 52 seats in the chamber.

House Democrats, too, are warning they won’t provide votes for a bill with contentious riders, which could be an issue if hard-line conservatives in the Freedom Caucus aren’t on board with GOP leaders.

"The Republicans have the votes in the House and the Senate and the White House to keep government open," House Minority Leader Nancy Pelosi said over the weekend. "The burden to keep it open is on the Republicans."

In recent years, many members of the roughly three-dozen-member Freedom Caucus have rejected all spending bills to protest funding levels, which has forced party leaders to seek Democratic support.

"With a government shutdown looming, Republicans will need their own votes to pass their bad bill, or they can work with Democrats to advance a bipartisan appropriations bill without harmful riders," said Rep. Betty McCollum (D-Minn.), ranking member on the House Interior and the Environment Appropriations Subcommittee.

Lawmakers from both parties say there is no appetite to let spending lapse. And if talks for finishing fiscal 2017 bills fail, the default plan is to take care of the Pentagon and rely on a continuing resolution for everything else.

Complicating the agenda even further are mixed messages from the White House and Congress about legislative priorities. Republicans on Capitol Hill and the White House had expressed interest in taking up tax reform after talks on overhauling "Obamacare" failed.

But now there is a move by the White House and some House Republicans to give health care reform legislation another try, perhaps as soon as this week.

Should health care reform somehow manage to become law, it would ease budget pressures on the tax code overhaul by lowering the federal revenue baseline by roughly $1 trillion from lawmakers canceling taxes associated with the Affordable Care Act. That would be a boon for the GOP’s stated tax reform goal of lowering overall rates (Greenwire, March 27).

But Treasury Secretary Steven Mnuchin told an Institute of International Finance conference in Washington last week that the administration is aiming to finish tax reform before the end of the year, regardless of what happens with health care.

On Friday, Spicer, amid skepticism about the House actually passing health care reform this week, tamped down expectations. "It is not our official position to get this thing done" this week, he said.

And after administration and congressional leaders said tax reform would likely wait till later this year, Trump told said Friday the White House would release an outline this week, including a "massive" tax cut.

Significant hurdles lie ahead, not least of which is the border adjustment tax proposal at the heart of the House GOP reform blueprint. The BAT aims to raise an estimated $1 trillion over 10 years by taxing imports at 20 percent while exempting exports.

Industries reliant on imports, including many refiners and large retailers, fear the proposal would simply hike prices for many products sold domestically. As a result, Senate Republicans have shown little interest in the proposal.

BAT proponents counter that an expected rise in the value of the dollar will offset any added costs from the plan. But skeptics have questioned whether that scenario would in fact occur. Still, Mnuchin has not taken the BAT completely off the table.

Four economic advisers to the Trump campaign added a wrinkle to the debate last week with a joint New York Times op-ed, in which they argued the administration should simply push to lower business tax rates and punt broader reform until 2018.

The advisers, Steve Forbes, Larry Kudlow, Arthur Laffer and Stephen Moore, suggest lowering corporate rates from 35 percent to 15 percent and allowing the immediate and full deduction of capital investments. They also call for dumping the BAT, which they liken to a "poison pill for the tax plan."

The op-ed also calls for repatriating up to $2 trillion in foreign profits parked overseas, with the revenues used in part to pay for an infrastructure package.

Repatriation is a pay-for that Senate Democrats have backed in the past, with bipartisan support, and could provide a boost for Trump’s call for a $1 trillion infrastructure package.

But another obstacle to tax reform is the president’s refusal to release his tax returns, which Schumer last week said would make it "much harder" to get to an agreement.

"For the very simple reason that when there’s a provision in the bill, people are going to say, ‘Oh, this is for President Trump and his business, not for the benefit of the American people,’" Schumer told reporters.