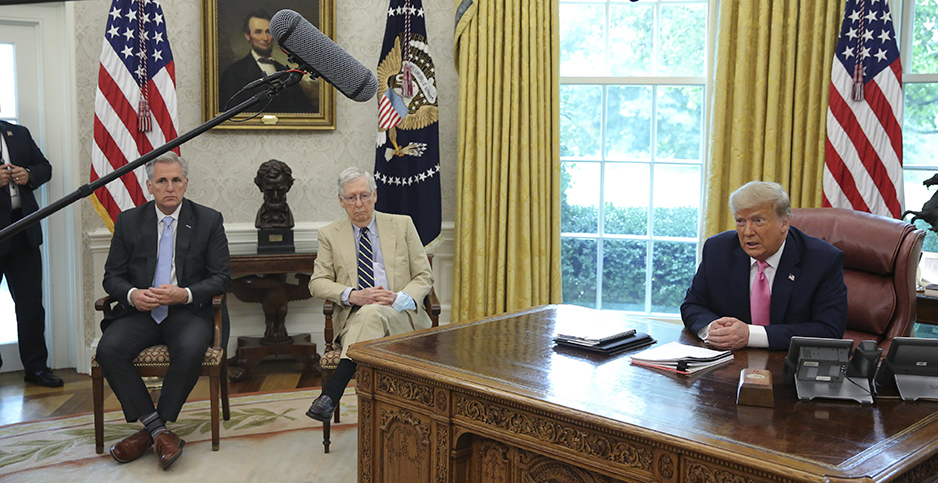 Congress and the White House are moving toward frenetic negotiations to enact another phase of COVID-19 relief in the coming weeks, but assistance for struggling energy sectors once again is conspicuously absent from the two parties’ early priorities.

Treasury Secretary Steven Mnuchin said yesterday that he will brief Senate Republicans on the White House’s position on pandemic relief, which he signaled will start "with another $1 trillion."

"We think that will make a big impact, and the focus … is really about kids and jobs and vaccines," he said yesterday at the White House following a meeting with President Trump and GOP leaders.

Mnuchin, who has led talks with Democrats on past pandemic relief bills, is expected to meet with White House chief of staff Mark Meadows and House and Senate Democratic leaders this afternoon to convene negotiations.

Senate Majority Leader Mitch McConnell (R-Ky.) said his caucus will soon release its own COVID-19 proposal, which he said would contain liability exemptions to protect businesses and schools during the pandemic.

"We don’t need an epidemic of lawsuits on the heels of the pandemic we’re already struggling with," the Kentucky Republican said at the White House yesterday, saying the bill’s emphasis will be on "kids in school, jobs and health care."

In later Senate floor remarks, McConnell said the upcoming bill "would neither be another multitrillion-dollar bridge loan to make up for a totally shut-down economy … nor an ordinary stimulus for a nation ready to get back to normal."

"The need now lies somewhere in between," said McConnell when opening the chamber after a two-week recess.

With pandemic unemployment benefits scheduled to expire in the coming weeks, Republicans are also exploring ways to help the unemployed and small businesses.

"If you’re sitting at home and you’re concerned that you don’t have a job, we want to make sure you’re able to come back," House Minority Leader Kevin McCarthy (R-Calif.) said yesterday at the White House.

‘Crying out’ for relief

"The country is crying out for relief," Schumer said on the Senate floor, hours after releasing a letter calling on his caucus to stay united behind bipartisan talks.

While the House has passed a $1.5 trillion green infrastructure package, H.R. 2, and will take up a minibus spending package later this week with billions of dollars of emergency COVID-19 spending, an infusion of funds and tax tweaks for clean energy were not among the items listed by Senate Democrats yesterday ahead of the launch of formal talks.

Schumer plugged the $3 trillion "Health and Economic Recovery Omnibus Emergency Solutions (HEROES) Act," which passed the House in May. It includes hundreds of billions of dollars for state and local governments, along with pandemic-related spending.

However, that measure does not address clean energy relief sought by industry and advocates, which was also missing from a laundry list of policies floated yesterday by top Senate Democratic appropriator Patrick Leahy (D-Vt.) for a supplemental COVID-19 spending package.

Still, advocacy groups are continuing efforts to put clean energy on the table in the forthcoming talks (E&E Daily, July 20).

"The next COVID-19 relief bill should include measures to stabilize investment and bring people in the clean energy and energy efficiency sector back to work," BCSE President Lisa Jacobson said in a statement.

Specifically, the group called for the investment tax credit (ITC) and production tax credit (PTC) to be made refundable, echoing a call last week from the solar sector (Greenwire, July 13).

Additionally, BCSE is calling for expanding eligibility and delaying the planned phase-down of key breaks, as well as overhauling and extending key energy efficiency incentives.

Separately, a coalition of steel industry trade groups urged Senate leaders to include infrastructure in the next COVID-19 relief bill — an option that GOP leaders have resisted.

The U.S. Chamber of Commerce, which has repeatedly urged Congress to take up infrastructure legislation, did not include roads, bridges and highways in a laundry list of relief priorities it sent to Capitol Hill last week, The New York Times reported over the weekend.

Notable on the Chamber’s list is liability protections sought by Republicans, but the nation’s largest business group also supports assistance for state and local governments — a top Democratic priority.

Citing news reports, Schumer yesterday decried the liability push as well as the expected absence in the Senate GOP plan of more funding for state and local governments.

"If the reports are accurate, the Republican bill will not even come close to meeting the moment of this great crisis," he said in a floor speech.