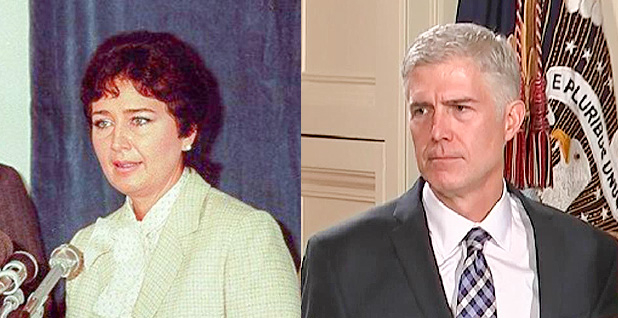 Appeals court Judge Neil Gorsuch is dominating the news today after President Trump last night announced his nomination to the Supreme Court. That same name was making headlines 34 years ago, when Gorsuch’s mother — then-EPA Administrator Anne Gorsuch Burford — was at the center of a scandal that led to her resignation.

Among the headlines from the 1980s as the Gorsuch controversy unfolded: "EPA chief is assailed at hearing; Gorsuch decries ‘political’ goals behind criticism," "Gorsuch reported on shaky ground," and "Gorsuch contempt battle heats up."

"You couldn’t pick up a newspaper for a while without reading about that scandal on the front page," said a former EPA employee who worked at the agency during Burford’s tenure.

Hearing that Burford’s son had been chosen for the vacant Supreme Court seat was "utterly amazing," that person said. "What are the odds that the young son of a central figure in a national scandal that rocked our place of work would rise to be a Supreme Court nominee?"

Burford — who died of cancer in 2004 at age 62 — was a highly polarizing figure at EPA. She was widely known as the "Ice Queen," slashed her agency’s budget, was cited for contempt of Congress after refusing to hand over toxic waste records and resigned after less than two years on the job (Greenwire, Aug. 11, 2015). She was Anne Gorsuch for much of her EPA tenure but changed her name in 1983 when she married Reagan administration Interior official Robert Burford.

Burford appears to have been fiercely protective of the three children from her first marriage to David Gorsuch (including Neil). She was enraged when a Washington Post reporter tried to reach out to Neil at his school, Georgetown Preparatory School, while she was embroiled in controversy at EPA, according to her 1986 memoir, "Are You Tough Enough?" She complained to the editor of the paper and later wrote that "anybody who knew us was well aware that if Neil wanted to give his side of the matter to a reporter, it wouldn’t be one from the Washington Post."

Neil, her older son, didn’t think she should have resigned from her EPA job, she wrote.

"Halfway through Georgetown Prep, and smart as a whip, Neil knew from the beginning the seriousness of my problems. He also had an unerring sense of fairness, as do so many people his age," she wrote. "’You should never have resigned,’ he said firmly. ‘You didn’t do anything wrong. You only did what the President ordered. Why are you quitting? You raised me not to be a quitter. Why are you a quitter?’ He was really upset."

Even before Neil Gorsuch’s Supreme Court nomination last night, Burford was being talked about by current and former EPA staff, who have compared the Trump administration to the early years under Reagan.

In the early 1980s, EPA’s leaders were perceived as hostile to the agency’s staff, top brass reportedly kept a "hit list" of targeted scientists, and key political appointees were fired or resigned under pressure from Congress.

But some who worked in Burford’s EPA — widely regarded as the agency’s darkest period — say they expect things to be worse under Trump, given the new administration’s rhetoric about slashing EPA staff and programs (Greenwire, Jan. 17). The former EPA staffers said the younger employees at the agency are now hearing more about Burford’s time there.

"That was a really difficult time at the agency, and now they are facing another, potentially more difficult, time," said a second former EPA employee who worked there under Burford. In the 1980s, "Everywhere I went, if you said you were at EPA, they were like, ‘Oh, my god, the agency is just in turmoil.’ Kind of like now."

Like his mother experienced, Gorsuch can expect strong criticism from the left, including environmental groups. Greens have already vowed to oppose his nomination, fearing that he’ll side with the court’s conservative wing in significant cases.

The former EPA staffers say that Gorsuch is clearly his own man, and that his mother’s record isn’t an indication of how he’ll tackle environmental issues.

They do share ideological leanings, however, said Hugh Kaufman, a prominent EPA whistleblower during the Burford years.

The first former EPA official today called it a "remarkable coincidence" that the "anti-regulatory sentiment that’s been brewing" first raised its head when Reagan-era Interior Department boss "Jim Watt and Anne Gorsuch got to town."

That person added, "When I heard about her son and the court, I actually for a moment couldn’t help but feel sorry for her that she didn’t live to see her son nominated. … I think it would have probably been a high point in a life that turned not very easy."