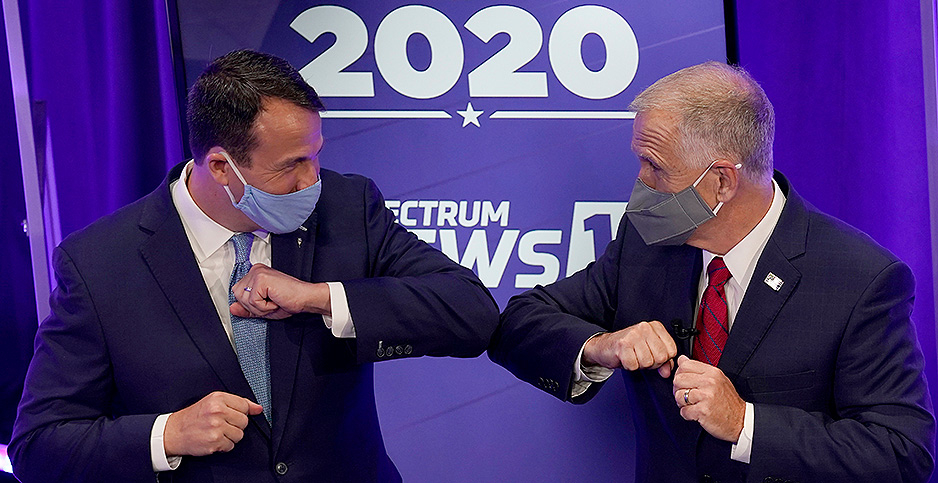 North Carolina Sen. Thom Tillis’ stance on contamination from per- and polyfluoroalkyl substances, or PFAS, is under scrutiny as the Republican battles in an uphill reelection fight.

North Carolina is one of the nationwide epicenters of the PFAS crisis of recent years, owing largely to decades of leaks of the PFAS known as GenX into the Cape Fear River, which serves as a water source for many communities.

There is also suspected contamination at various military bases in the state, including Marine Corps Base Camp Lejeune.

PFAS, a broad class of toxic nonstick substances, are used in products including coatings and firefighting foams, and have been linked to cancers, thyroid disease and other ailments. They’re called "forever chemicals" by environmental and safety advocates because they are so resistant to degradation.

The North Carolina Senate race is one of the most pivotal elections in the country this year. If former state Sen. Cal Cunningham (D) unseats Tillis, it will contribute to a potential change of power in the Senate.

Tillis has been one of the most vocal senators on the PFAS issue, joining bipartisan calls for EPA to set a national standard, co-sponsoring a bill to require federal agencies to clean up their own contamination and pressuring EPA to designate PFAS as hazardous substances.

But he voted in June against an amendment to the National Defense Authorization Act for fiscal 2021 that would have designated two PFAS chemicals as hazardous under the Superfund law.

The designation, opposed by companies and conservative lawmakers, would have given the military leeway to tap cleanup dollars and pursue responsible parties.

The same day as that vote, Tillis’ campaign accepted a $1,000 donation from the corporate political action committee of DuPont de Nemours Inc., the chemical giant whose predecessor formerly owned the facility linked to the Cape Fear River pollution.

The PAC for Honeywell International Inc., linked to PFAS pollution in other areas of the country, gave Tillis’ campaign $3,000 five days later.

In all, Tillis’ campaign has taken in more than $30,000 from companies blamed for PFAS contamination since his 2014 election, according to records submitted to the Federal Election Commission.

Cunningham’s campaign said Tillis missed a major opportunity to crack down on PFAS at one of its most common sources: the military. It’s part of a pattern of Tillis prioritizing corporate interests over the needs of individuals, the Democrat’s campaign said.

"Senator Tillis had the chance to vote and make it easier to clean up forever chemical pollution on our military bases, but just as he did with rising drug prices, he voted not to help North Carolinians, but to help the highest bidder to his campaign," Cunningham spokesman Aaron Simpson said.

"North Carolina deserves a senator whose vote is not for sale, which is why in Washington Cal will continue his work to protect North Carolina’s natural resources and hold polluters accountable."

Tillis’ campaign shot back, defending the senator’s record and his vote against a hazardous designation for the types of PFAS.

"Contributions never have and never will have an impact on how Senator Tillis votes, and the insinuation otherwise when it comes to this issue is ridiculous considering that Senator Tillis has been a bipartisan leader in the push to make the EPA set a national PFAS standard to help stop PFAS contamination," spokesman Andrew Romeo said.

"The NDAA vote was a jurisdictional issue, and Senator Tillis believes treatment and regulation of PFAS should be led by the agencies with expertise like the EPA and not the Department of Defense, especially since private companies will ultimately bear significant responsibility for PFAS contamination."

In addition to pushing EPA PFAS standards and getting agencies to clean up their contamination, Tillis in 2017 helped torpedo the nomination of Michael Dourson to lead the agency’s chemical office.

Tillis, in announcing his opposition, pointed to doubts about whether Dourson would handle the GenX issue sufficiently.

Environmentalists hope the same logic would lead Tillis to oppose Nancy Beck, Trump’s nominee to chair the Consumer Product Safety Commission, over allegations that she pushed against certain PFAS restrictions.

Despite the rhetoric, PFAS isn’t a top-tier issue in the North Carolina Senate race, and it hasn’t come up at any of the three debates between the candidates.

Other issues are likely to dominate in the final month of the campaign, including Cunningham’s admission that he sent romantic text messages to a woman who is not his wife.

Nonetheless, with the race so close, anything could be an advantage or liability for one of the candidates. Cunningham has been consistently polling ahead of Tillis in surveys conducted in recent months.

Tillis’ fate appears to be mainly tied to Trump’s, though Tillis has been running slightly behind the president, said Andy Taylor, a political science professor at North Carolina State University.

"Trump’s in a sort of dogfight here. And Tillis is also 3, 4, 5 points behind him," Taylor said. "So if Trump can’t win the state fairly handily, Tillis is going to be in trouble. And that’s what the polls are suggesting at the moment."

Tillis and his allies have been trying to paint Cunningham as someone who will say whatever he wants to get elected, but then be beholden to far-left progressives if he gets to Congress.

"I think it’s hard for Tillis to make [Cunningham] out to be an extremist in the way you might be able to with a more conventional liberal," Taylor said.