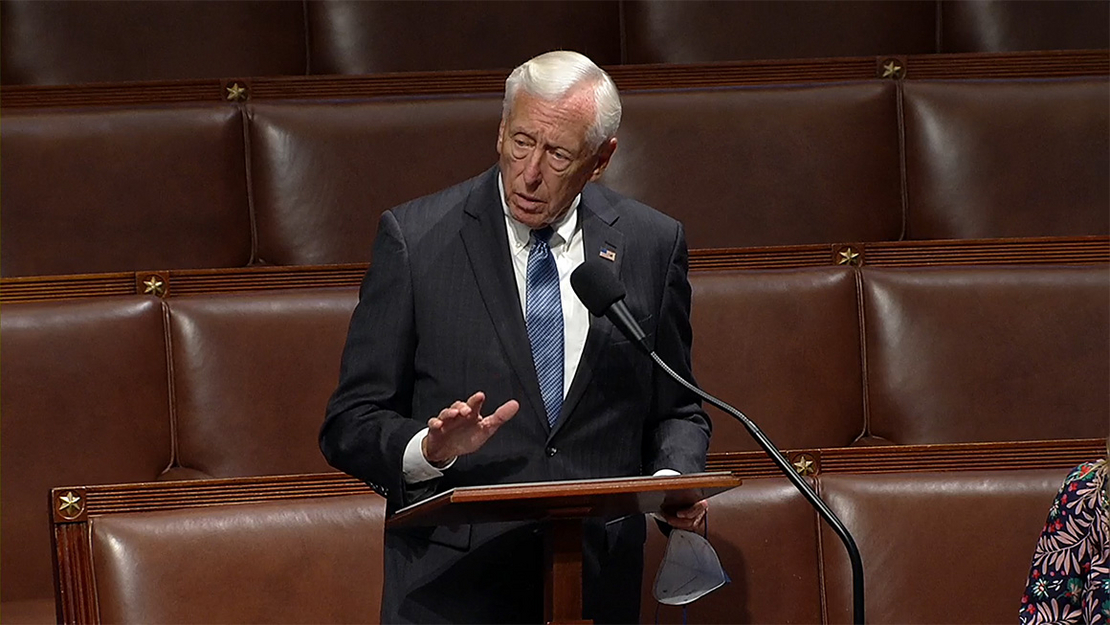 House Democratic leaders were bullish today that they are close to an agreement on a multitrillion-dollar social and climate spending package that could allow a vote to take place as soon as next week.

Rep. Steny Hoyer (D-Md.), the House majority leader, announced this morning that “the House will aim to consider” next week both the yet-to-be-finalized reconciliation measure and the bipartisan infrastructure package the Senate passed over the summer.

“I hope to bring both of these bills to the floor if they’re ready,” Hoyer elaborated in floor remarks.

Meanwhile, House Speaker Nancy Pelosi (D-Calif.), freshly returned from a morning meeting at the White House with President Biden, said, “There are many decisions that have to be made, but I would say that 90 percent is agreed to and written.”

There is some urgency to move both bills next week. On Oct. 31, the one-month extension of federal surface transportation program funding will expire. Clearing the Senate-passed bipartisan infrastructure package before that date would, among other things, fund these programs for the next five years and avoid lawmakers having to advance another stopgap patch.

But Democrats will only have the votes to pass the bipartisan bill if they can produce a substantive enough “framework” for the reconciliation bill to satisfy progressives, who won’t vote for the first without the second.

Rep. Ilhan Omar (D-Minn.), the whip for the 96-member House Progressive Caucus whose buy-in will be critical to determining whether leaders can move forward with their dual-track legislative strategy next week, told reporters today she couldn’t say how close — or far away — negotiators were to striking a deal, including on climate provisions.

Since the $150 billion Clean Electricity Performance Program, or CEPP, fell off the negotiating table in deference to opposition from Senate Energy and Natural Resources Chair Joe Manchin (D-W.Va.), Democrats and the White House have been struggling to come up with alternatives to the initiative that was at the heart of the original reconciliation bill’s plans for aggressively reducing emissions.

At a CNN town hall last night, Biden said he still expected to spend that $150 billion on “other things that allow me to do things” to drive down emissions. That could include boosting existing programs already part of the reconciliation bill or creating a new block grant program for states to pursue their own emissions reduction activities.

There will also certainly be a suite of clean energy tax incentives that would do some, though not all, of the work toward helping Biden reach his pledge to reduce emissions by 50 to 52 percent under 2005 levels by 2030.

But Omar said some Progressive Caucus members continued to have concerns that negotiators were prepared to sign off on emissions reductions proposals that would fall short of what they feel is needed to respond to the climate crisis. She referred to Rep. Jared Huffman (D-Calif.), who earlier this week said he “can’t accept … just throwing money into some other program and calling it a climate solution.”

Huffman continued, “The CEPP is still the best concept that we’ve come up with, and if we can make that work for Sen. Manchin in West Virginia, I still think that should be plan A. Everything else is, frankly, pretty fraught.”

Given their slim majority, Democrats can only afford to lose three votes on the partisan reconciliation package.

“In order to come up with a framework that could actually be agreed upon, we can’t lose any votes on this side,” Omar said, “so that framework will have to include what is sellable to the whole [progressive] caucus.”