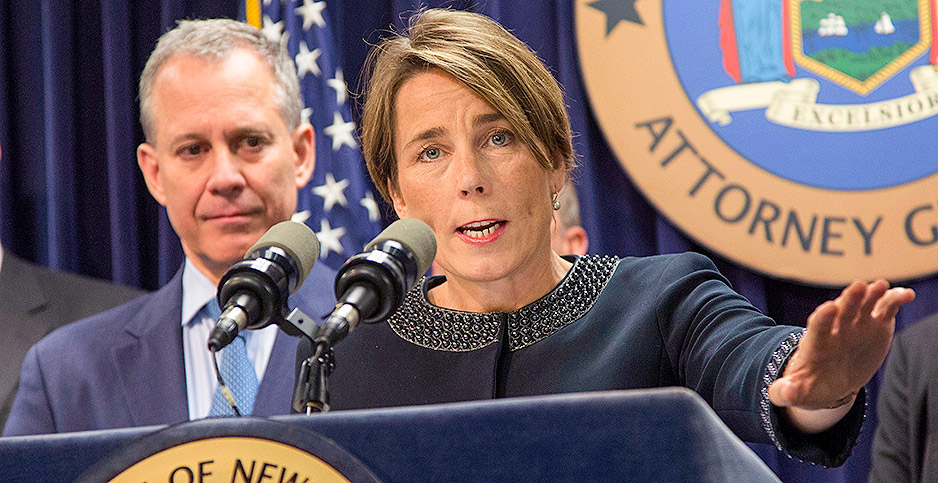 As the former Oklahoma attorney general, he has an unlimited political future back home, if he wants it, and may be angling to become Trump’s next attorney general (E&E News PM, Jan. 5).

With the Republicans fully in control of Washington, D.C., and holding a majority of governorships, the role of Democratic attorneys general has been elevated. Since Trump took office a year ago, they have consistently been at the vanguard of their party’s opposition to the president.

But just as significantly, the political profile of the Democratic attorneys general is also being elevated in the current political environment.

Many of these Democrats will surely be running for higher office before too long, and Democratic strategists hope to bring in reinforcements this year. Just as Democrats appear to be on offense generally in congressional and gubernatorial races, they are also confident they will grow their ranks of attorneys general in the 2018 elections.

"One of the challenges of our party over the last several years is, nobody has really owned the bench," said Sean Rankin, executive director of the Democratic Attorneys General Association (DAGA). "Well, we own the bench now."

Democratic attorneys general are using lawsuits — or the threat of legal action — to challenge the president’s policies on climate, energy exploration on federal lands, health care, immigration, women’s reproductive rights and much more. Pruitt, ironically, has been a major target of the Democrats’ legal fire.

"They feel, correctly, they have an important role to play when it comes to protecting the environment," said Jerry Berger, a communications lecturer at Boston University who heads the school’s statehouse reporting program.

"Yes, we see ourselves in opposition much of the time to what Donald Trump is doing," Rankin said. "But part of that is because Donald Trump has no respect for the rule of law."

Not surprisingly, Republicans don’t quite see it that way.

"No matter who is in the White House, the core mission of Republican state attorneys general remains the same — defending the rule of law and championing opportunity for all Americans," said Scott Will, the executive director of the Republican Attorneys General Association.

The political parties can debate the officials’ motives and tactics. But there’s little argument that some Democratic attorneys general are using their opposition to Trump to boost their political profiles — just as Republicans like Pruitt and Morrisey did during the Obama administration.

Leading the way is New York Attorney General Eric Schneiderman (D), who has initiated or signed on to more than two dozen lawsuits against the Trump administration, including on climate and the environment. He has vowed to sue the Trump administration when it finalizes plans to eliminate Obama’s Clean Power Plan and has sued Pruitt’s EPA in a variety of ozone and emissions cases.

Becerra filed a lawsuit against Pruitt in August, accusing him of not responding to a Freedom of Information Act request and withholding documents that might illuminate potential conflicts of interest (Climatewire, Aug. 14, 2017).

Healey led a suit against EPA’s decision to halt regulation of methane emissions and penned an op-ed in The Boston Globe earlier this year excoriating Trump and Pruitt.

"With a president and an EPA administrator beholden to the fossil fuel industry and who outright deny the existence of climate change, the states must continue to lead and safeguard our future against this existential threat," she wrote.

"Yet again, EPA Administrator Pruitt is showing his true colors — ignoring his legal obligation, and failing to protect the American people from environmental harm," Frosh said.

One Republican strategist who tracks statehouse politics, speaking on the condition of anonymity, said he detects a "lurch to the left" by Democratic attorneys general that matches the drift of the party on Capitol Hill and nationwide, adding that these attorneys general view themselves as "proud, card-carrying members of the Resistance."

"Democratic attorneys general sue when it is in their political interests," the GOP operative said.

Seven former attorneys general are currently serving as governors of their states, and seven ex-attorneys general are serving in the U.S. Senate. Besides Morrisey, the only Republican attorney general running for the Senate this year is Missouri Attorney General Josh Hawley, who was just elected to his current post in 2016.

The only Democratic attorney general seeking higher office this year is Maine’s Janet Mills, who is in a multicandidate primary for governor. Attorneys general in Maine are selected by the state Legislature, so Mills has never won a statewide election.

Political professionals see bright futures for several Democratic attorneys general, including Schneiderman, Healey, Becerra, Hector Balderas of New Mexico, Bob Ferguson of Washington and Josh Shapiro of Pennsylvania. Frosh, who is 71, has said he has no further political ambitions.

It’s no secret in New York that Schneiderman is eager to run for governor. But he’ll seek a third term this year, with Gov. Andrew Cuomo (D) also seeking a third term, secure in the knowledge that the past two attorneys general, Cuomo and Eliot Spitzer (D), were elected governor after high-profile tenures as the top lawyers in the state.

"The New York attorney general traditionally plays an outsized role," said Evan Stavisky, a New York-based Democratic consultant and lobbyist. "Eliot Spitzer was ‘The Sheriff of Wall Street,’ Andrew Cuomo was ‘The Sheriff of State Street,’ going after government corruption [in Albany]. Eric Schneiderman is unafraid to take on the White House. … Everyone who knows Eric Schneiderman knows he’s a savvy guy and a brilliant legal thinker."

With Healey, a 46-year-old former professional basketball player, "there was gobs and gobs and gobs of speculation that she would run for governor" this year, said Berger, the Boston University lecturer. But she has passed on challenging Massachusetts Gov. Charlie Baker (R), who is the most popular governor in America, according to recent polls.

Healey is a shoo-in for a second term and will likely head the list of Democratic gubernatorial contenders in 2022, assuming Baker is re-elected.

"Maura Healey is a good politician as well as a good attorney general," Berger said.

In California, Becerra, who was appointed attorney general a year ago after his predecessor, Kamala Harris (D), was elected to the Senate, went from being a man with a great future in the House of Representatives, where he was the fourth-ranking Democrat, to a man with a great future in politics back home. But with an open gubernatorial race in California this year, and with veteran Sen. Dianne Feinstein (D) seeking re-election, Becerra may have to wait a while to move up, just as he was waiting for top House Democratic leaders to move on — which never happened.

Beyond those already in office, leaders of the DAGA are focusing on increasing the ranks of Democratic attorneys general this election year. Republicans currently have a 25-18 advantage in attorneys general who are elected.

Democrats believe they have at least a handful of pickup opportunities this fall. The DAGA released a memo after the November 2017 elections in which strategists vowed to be on offense thanks to "ramped up recruiting across the country, new approaches to campaigning, and educating voters on the importance of the office of attorney general."

The Democrats are particularly high on their chances in:

But Republicans, perhaps mindful of the success and ambitions of their own attorneys general, have wasted no time in attacking Ford’s political dreams.

"Aaron Ford does not want to be attorney general," the RAGA wrote in a recent blog post.

"Okay, that was quite a shot, but consider the chaser. …

"Ford, an announced candidate for attorney general has repeatedly said he wants to be Nevada’s chief executive. Oh yeah, then President of the United States.

"Nevadans deserve an attorney general who actually wants the job," the GOP concluded, "not someone who sees it as a stepping stone to further his career."