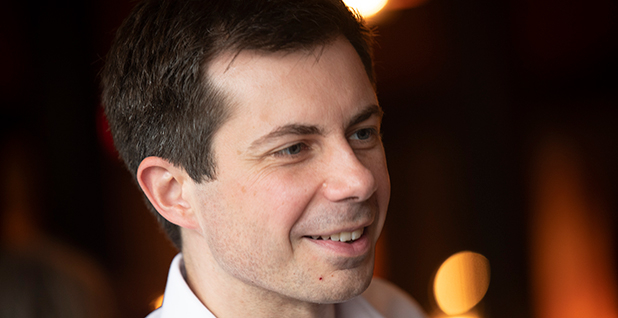 Mayor Pete Buttigieg of South Bend, Ind., was one of several 2020 Democratic presidential contenders who participated in a series of town halls on CNN last night. Rick Friedman/Polaris/Newscom

The starting gun was a marathon session of five town halls that CNN hosted with five of the big names running as Democrats for president. In most of the hourlong sessions, global warming was a major theme, and — more significantly — all five candidates started to sketch out how their visions on climate change would differ from those of their rivals.

The focus wasn’t a total surprise.

Four of the five contenders on stage — Sens. Kamala Harris of California, Amy Klobuchar of Minnesota, Bernie Sanders of Vermont and Elizabeth Warren of Massachusetts
— are co-sponsors of a congressional resolution that promotes the Green New Deal. The fifth, South Bend, Ind., Mayor Pete Buttigieg, previously had voiced support for the Green New Deal and its plan of fighting climate change with a massive, government-led jobs program.

What was new last night, however, were the individual touches the candidates put on their approaches to global warming.

Warren called for a moratorium on oil drilling on federal lands. Harris emphasized the need for a comprehensive policy to deal with future water shortages. Sanders said he wants to find new jobs for workers in the fossil fuel industry. Klobuchar voiced support for some of the major climate policies of the Obama administration. And Buttigieg, who at 37 years old is the youngest of the five, framed the issue as a critical fight for his generation.

The emphasis on climate could yield some political dividends, too, at least in the Democratic primary. A recent poll of likely Democratic caucusgoers in Iowa — an early 2020 bellwether state — found that nearly 3 out of 4 of them believed it was either "very important" or "somewhat important" for the eventual Democratic nominee to back the Green New Deal (Climatewire, April 12).

Here’s more of what the five candidates said.

Klobuchar framed climate change as an issue that can win the rural Midwestern voters who helped put President Trump in the White House.

"This is what I say to my rural voters: I say look at what’s in front of you, because for too long we’ve been talking about it, I think, as more of a coastal issue," the Minnesota Democrat said.

Hurricanes and rising sea levels are a problem, she said, "but let’s talk about it from the middle of the country, where we need the political support. And I personally think someone from the heartland could do a pretty good job of that."

She recounted visiting Iowa during the heavy March flooding, standing with a woman who watched her century-old home go underwater for the first time ever.

Klobuchar mixed those kinds of personal tales with references to climate science, including a study released earlier that day on Greenland’s melting ice sheet. That got her some of her biggest applause of the night from the town hall audience, mostly students and young people hosted by New Hampshire’s Saint Anselm College.

"Climate change isn’t happening a hundred years from now. It’s happening right now," she said, adding that it would be an early priority of her administration.

On day one, Klobuchar said, she would reaffirm U.S. participation in the Paris climate agreement.

Days two and three would be for restoring the Obama administration’s Clean Power Plan for the electricity sector and clean car standards for the transportation sector.

"I would bring back the gas mileage standards [the Trump administration] just left and said, ‘Oh sorry, I know you car companies are ready to do it, but guess what, you don’t have to.’ That’s what they did," Klobuchar said.

Those proposals are more modest than the Green New Deal resolution Klobuchar has co-sponsored. It calls for massive government investments in jobs programs, research, health care and other programs to decarbonize the economy and adapt to a changed climate — all through a 10-year mobilization.

Klobuchar said some parts of the plan might fall by the wayside.

"As you look at the goals in the Green New Deal — and nobody thinks we’re going to dot every ‘i’ and cross every ‘t’ in a short period of time — but we need those goals. We need as a nation to come behind goals," she said.

Sanders was pressed to fill out details of the Green New Deal, but he mostly listed big-picture ideas already in the resolution.

While he made passing reference to his 2015 bill that had specific proposals — including emissions targets every decade, a carbon fee that would increase annually and a council to prioritize adaptation projects — he mentioned none of those policies.

Instead, Sanders said he would "take on" fossil fuel companies while allying with their workers to decarbonize the economy.

"All [those workers] are trying to do is feed their families," he said, so he would direct "many, many, many billions of dollars" to help them retrain for jobs that pay even better.

It’s going to take a huge workforce to accomplish any piece of the Green New Deal, he said.

"There are buildings all over New England, homes all over New England, that are wasting an enormous amount of energy. We can weatherize those homes. I’ve been in homes in Vermont where the fuel bill went down by 50% because people got the insulation, the windows, the roofing that they needed. Millions of people can be helped in that respect," he said.

Framing climate change as a moral issue, Sanders elevated it above other policies.

"Y’know, of all my disagreements with Trump — on virtually every issue — the idea that he continues to talk about climate change as a hoax, or not real, is so dangerous and so harmful," he said.

The Massachusetts Democrat began the discussion on climate with a dire warning about what might happen if the United States doesn’t immediately start to address global warming.

It’s why Warren said she’s an early backer of the Green New Deal. She said the ambitious climate plan adds a sense of urgency to the discussion while offering several ways to combat global warming, such as investments in infrastructure.

And not just green-friendly infrastructure, she said, but also pragmatic responses to the consequences of a warmer planet. "It’s also about hardening our infrastructure so that we can withstand heavier storms, so that flooding is not so much a problem," she said.

Warren had other ideas, too.

To loud applause from the young crowd, she said that on her first day as president, she would place a moratorium on new drilling and new mining on federal lands.

"We should not be selling out for pennies on the dollar to mining companies and to oil companies our national treasures," Warren said.

She also discussed the idea of creating thousands of new jobs for "people who want to go spend a year in the national parks and the national forests to be able to give something back to the land and to make some repairs."

Critical, too, she said, is re-establishing the United States as a worldwide leader on climate. Warren called Trump’s retreat from the issue "dangerous."

"Because it’s not only what we’re doing is wrong," Warren said. "It’s that we’re giving cover to the rest of the world [and] for everybody who doesn’t want to have to step up."

Like Warren, Harris warned of a bleak future if nothing is done to address warming. The climate crisis represents an "existential threat to who we are as human beings," the California Democrat said.

"In a short matter of time, guys, we’re going to be fighting wars over water," Harris added.

But she framed the climate fight — and her support of the Green New Deal — as more than just an environmental argument. She said there are potential economic benefits, too.

"The Bureau of Labor Statistics came out with a list last year of the top 20 jobs that are going to see the greatest amount of growth in our country over the next 10 years," she said, referring to the agency’s outlook on the fastest-growing occupations. "No. 1 and No. 2? Installation and maintenance of wind turbines and solar panels."

Harris also tried to link climate change with the need to develop a comprehensive policy for water — "with an equal emphasis on recycling, on conservation, on capture of water, storage of water [and] desalination."

Of the five candidates who spoke last night, Buttigieg talked the least about climate change — though the South Bend mayor did insert a few notable comments at the end.

Principally, they had to do with the issue of why climate change is such concern for members of the millennial generation.

But, he added, the "longer you’re planning to be here — by definition — the more you have at stake in the decisions that are going to be made, especially when climate change is largely going to dictate the economic opportunities and even physical safety of people our age and younger."

"I think having a personal stake in what the world is going to look like in 2054 — that’s the year I get the current age of the current president … helps you have standing to speak to some of these issues and concerns."