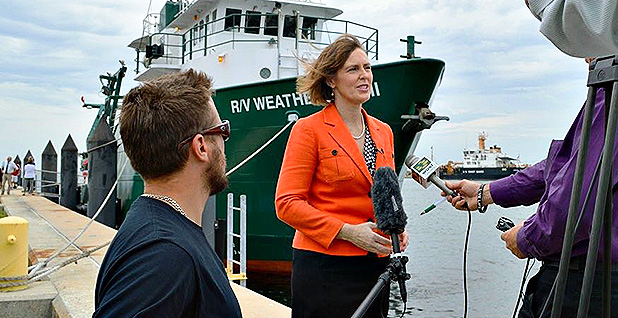 Democratic House leaders have tapped Rep. Kathy Castor (D-Fla.) to lead a new committee on climate change in the next Congress, the lawmaker confirmed this morning.

Castor said the news wasn’t "official quite yet" — as the parameters of the committee still were under discussion — but she said one of the goals should be to "raise the profile of what America should be doing to address the climate crisis."

In taking the job, the six-term lawmaker would be walking into a delicate situation.

For weeks, establishment figures and environmental activists have feuded over the scope of the committee, which Pelosi endorsed during a protest at her office just a week after Democrats took control of the House in the midterm election.

The protesters, led by the Sunrise Movement, want the committee to focus on crafting a "Green New Deal" — their vision of a massive climate-friendly jobs program.

An ally of the group, Rep.-elect Alexandria Ocasio-Cortez (D-N.Y.), also has called for membership of the committee to be limited to lawmakers who don’t accept campaign contributions from the fossil fuel industry.

Asked about the committee’s mission, Castor said the Green New Deal would be a component of its responsibility but not its only objective.

"I think they have some terrific ideas," she said of the Green New Deal advocates. "But that’s not going to be our sole focus."

Castor also indicated that interested members would not be disqualified from serving on the committee if they take money from the fossil fuel industry. "I don’t think you can do that under the First Amendment, really," she said.

The Florida lawmaker did note, however, that there should be transparency about where members get their campaign contributions. "Whether it’s this committee or any other committee," she said. "Are you on Energy and Commerce and taking a lot of money from Big Pharma? People should know about that."

Most recently, Democrats have debated whether the panel should have subpoena power. House Minority Whip Steny Hoyer (D-Md.) said yesterday he believed it should not — a contrast to the last climate change committee, led by then-Rep. Ed Markey (D-Mass.), which was granted subpoena authority when Democrats last controlled the House (Climatewire, Dec. 20).

"I don’t know that they think they need subpoena power," Hoyer said. "They are going to have [climate] experts who are, I think, dying to come before them."

That led to a backlash from activists, including those with the Sunrise Movement. "Whip Hoyer is standing in the way of a plan that huge majorities of Americans support," said spokeswoman Varshini Prakash.

Turf battles are driving a lot of the internal Democratic feud. Veterans such as Rep. Frank Pallone (D-N.J.), who is in line to lead the Energy and Commerce Committee, have fought against the committee’s revival. Pallone said earlier that he didn’t "think it’s necessary" (E&E Daily, Nov. 14).

Castor said she hoped to "develop a joint plan of action" with the other committees to tackle climate change. "I’ve already talked with incoming Chairman Pallone about coordinating our efforts," she said. "We have a moral obligation to our kids and our grandkids to address this and do it aggressively."

Rep. Jared Huffman (D-Calif.), a backer of the Green New Deal, said this morning Castor would be a "terrific" choice for the job.

"I think she brings a lot of thoughtfulness to the position, and she’s experienced, so I can’t disagree with that," Huffman said.

Rep. Paul Tonko (D-N.Y.) added that he’s had a "good partnership" working with Castor on drinking water and brownfields issues on the Energy and Commerce Committee.

That relationship will likely have to continue. Tonko is currently in line to chair the E&C Environment Subcommittee, where he’s likely to take up climate issues in the next Congress.

Tonko was originally among the critics of the select committee proposal, but he told E&E News this morning the debate in the caucus has been "pretty well-settled."

"Any outreach we can do — any encouragement to bring people into the discussion and the dialogue so that we can advance sound, thoughtful, science-based, evidence-based outcomes — we will do," Tonko said.

Rep. Scott Peters (D-Calif.), also on Energy and Commerce, said Castor is well-versed in environmental and climate issues. "She’s from Florida," he said. "She has some personal experience with severe weather."

Peters said he himself was not seeking to be on the select panel. He laughed when asked whether a turf fight between Energy and Commerce and the select committee had been resolved, saying, "I am sure it hasn’t. I think it will play out over time."

Many Democratic lawmakers say the panel could be a landing place for many of the freshman members who have said they’d like to be on Energy and Commerce.

Typically, it takes a few terms for a lawmaker to land a seat on E&C, but in the interim the select panel could offer them a chance to weigh in on issues like the New Green Deal.