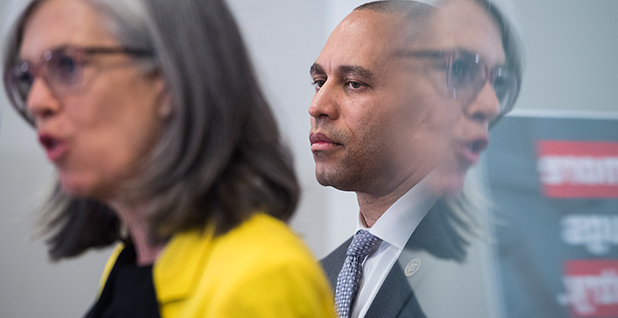 As House Democrats prepare to vote on their first major climate bill of the year, leaders urged members to avoid talking about its main goal.

The legislation would bar the United States from pulling out of the Paris climate accord by blocking any spending to do so.

During a closed-door caucus meeting yesterday ahead of floor action today on H.R. 9, leaders told the rank and file to focus on the economic benefits of climate action and not "some international standards."

The House will debate 30 mostly modest amendments to the legislation today before voting on final passage tomorrow.

"It’s all about unleashing the clean economy here in America. That agreement would allow countries to create their own goals — America did and it has already created a wave of green jobs," the bill’s sponsor and House Select Committee on the Climate Crisis Chairwoman Kathy Castor (D-Fla.) told E&E News after addressing the caucus.

Democrats will talk up the economic impacts of staying in the accord that would reduce greenhouse gases 26% to 28% by 2025 compared with 2005 levels. They’ll insist that pursuing those efforts would spark a wave of new green jobs, including scientists who would develop new technologies and blue-collar workers who would build and deploy them.

"We want to grow jobs and the economy and be good stewards of the environment. So it’s a win-win situation," said Rep. Paul Tonko (D-N.Y.), the chairman of the Energy and Commerce Subcommittee on Environment and Climate Change who made the same case at the caucus meeting.

The Democratic message would aim to counter and, in some ways, co-opt the arguments House Republicans have made against the climate deal.

The GOP has a different definition of what constitutes "win-win." Republicans have warned that the accord ties the United States to costly, unattainable international standards rather than focusing on domestic technological advances to curb carbon emissions.

"If you study the policies of the Democrats, they want to release the power to other nations and make the world actually not cleaner, because America’s innovation is making the world cleaner and safer at the same time. We can have a win-win," House Minority Leader Kevin McCarthy (R-Calif.) said yesterday.

But Democrats say they want to avoid much mention of the international standards during the floor debate.

Rep. Katherine Clark (D-Mass.), vice chairwoman of the Democratic Caucus, said yesterday the bill may refer to the Paris accord, but "these aren’t some international standards. These are standards the United States developed."

Getting the economic message

Rank-and-file lawmakers seem to have gotten the message yesterday when asked to weigh in on the bill.

Rep. Sean Casten (D-Ill.), who sits on the Select Committee on the Climate Crisis, said lawmakers are likely to talk about Paris as it relates to their district, whatever the instructions from leadership.

The freshman lawmaker has an advanced degree in engineering and was an energy consultant before his election last fall. He said there’s an easy argument to be made that the agreement would help the United States become a world economic leader on clean energy.

"When they talk about criminal justice reform and how we should talk about it, I listen closely because I’m not an expert there," Casten noted, clearly tongue-in-cheek.

The caucus appears to be relatively unified on that point, even among progressives who have pushed for more aggressive measures to tackle climate change.

The prevailing line from Democrats is that H.R. 9 is a good first step, but it won’t stop the House from doing more down the road.

Although the bill will almost certainly die in the Senate, "all we can do in the House is push things and then make the case in the Senate," Rep. Ro Khanna (D-Calif.) told reporters yesterday.

Khanna, a leading progressive backer of the Green New Deal and occasional critic of leadership’s moves on climate, offered his own version of the economic argument for Paris.

"It’s going to be about making sure that America doesn’t lose the lead in the energy sectors of the future," Khanna said, citing China’s expansions into electric vehicles and renewables.

But Democrats said further action on climate — whether through a carbon fee, cap-and-trade system or clean energy mandate — and how aggressive it should be is yet to be decided.

"I think it’s getting closer to consensus on that, but I’m not sure we’re there yet," Natural Resources Chairman Raúl Grijalva (D-Ariz.) told reporters yesterday. "In fact, I know we’re not there yet."

Democrats are expected to be nearly united in backing the legislation and are hopeful of picking up some Republicans. But the bill seems likely to be only nominally bipartisan on the final vote.

Rep. Brian Fitzpatrick (R-Pa.), a carbon pricing supporter who is a co-sponsor of a separate resolution to support the Paris Agreement, said he would support H.R. 9.

"I hope they do," Fitzpatrick told E&E News when asked if any other Republicans would join him. "But I’ve got to represent my people back home, and it’s the right thing to do."