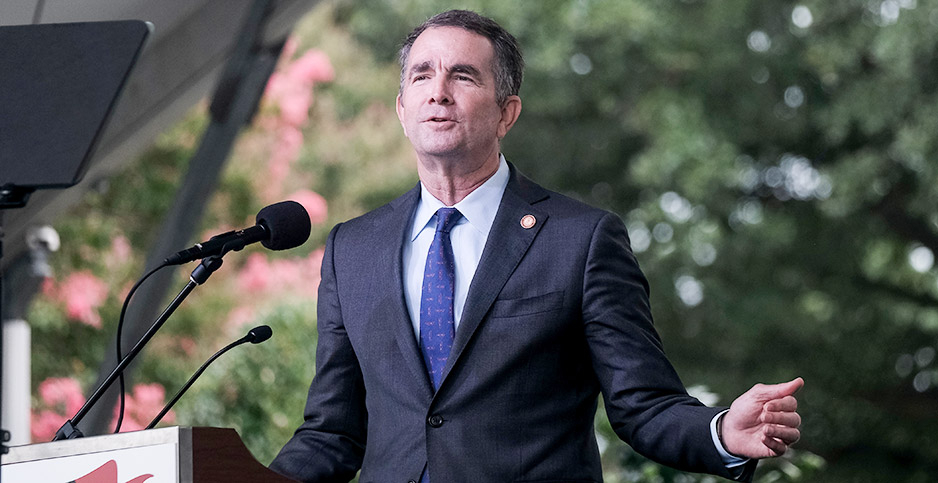 Democratic victories in Virginia give Gov. Ralph Northam (D) an opportunity to act on his climate change agenda. Michael A. McCoy/REUTERS/Newscom

Democrats wrested control of Virginia’s General Assembly away from Republicans yesterday, paving the way for the Old Dominion to join the Regional Greenhouse Gas Initiative and pursue legislation to boost renewable energy.

RGGI membership has been a tenet of Gov. Ralph Northam’s climate agenda. But the Democratic governor’s attempts to join the cap-and-trade compact of 10 states had been thwarted by Republican lawmakers, who had controlled the General Assembly in Richmond. That roadblock no longer exists.

Democrats came away with 21 seats in the Senate late yesterday, giving them a one-seat majority. In the House of Delegates, they defended or flipped 53 seats and were leading in another. That would amount to an eight-seat majority if results held.

"When it comes to climate, there has been dramatic failure of leadership at the federal level, which has created the opportunity for states to lead. Virginia, based on these election results tonight, is planning to be at the forefront of the state movement to combat climate change," said Will Cleveland, a lawyer at the Southern Environmental Law Center.

Climate policy in the U.S. has closely tracked with Democratic state victories in recent years. In 2018, Democrats seized control of all three branches of state government in Colorado, Nevada, New Mexico and New York and added to their narrow legislative majorities in Washington state.

In the following months, New Mexico, New York and Washington all passed legislation to eliminate emissions from power plants by midcentury. Colorado passed a series of reforms meant to green its power supply while Nevada boosted its requirements for renewable energy.

Northam has indicated that he wants to follow in those state’s footsteps. In September, he issued an executive order setting renewable energy goals for the state. They included generating 30% of Virginia’s power from renewables by 2030 and all power from non-carbon emitting sources by 2050.

But with Republicans controlling the General Assembly in Richmond, the order lacked the force of other states. How far Northam and his newly empowered Democratic allies will push remains to be seen.

Environmentalists spent big on this year’s races, with the Virginia League of Conservation Voters spending $1.5 million statewide. They made clear they intend to flex their legislative muscles.

"Our big push will be a bill for a pathway to 100% carbon free electricity," said Harrison Wallace, Virginia director of the Chesapeake Climate Action Network. "We plan to make it happen here too."

RGGI has long been the centerpiece of Northam’s climate policy. His predecessor, Terry McAuliffe (D), initiated the plan by directing state regulators in 2017 to develop a rule to join the group of Northeastern states (Climatewire, May 17, 2017). That rule was finished earlier this year, but Republicans inserted a provision in the budget barring the state from spending money on RGGI (Climatewire, May 6).

Yesterday’s results mean Northam could now ask for legislative approval to join the program, a move that would have been impossible in previous years. It could also make implementing the program considerably easier.

Virginia regulators designed a complicated program that avoided returning auction revenues back to the state when Republicans previously controlled the purse strings (Climatewire, Sept. 26, 2017). Democratic victories last night open the door for Virginia to use that money in areas like energy efficiency.

The outcome also gives Northam a boost in his efforts to help craft the Transportation and Climate Initiative, a proposed 12-state, cap-and-trade program geared at emissions from vehicles.

One big question will be how Democrats approach Dominion Energy Inc., the state’s largest utility. Dominion has emerged as a flashpoint in Virginia politics in recent years.

The utility backed a controversial rate freeze in 2015, anticipating former President Obama’s Clean Power Plan would raise rates on consumers. The Clean Power Plan never went into effect following President Trump’s election, leading to criticism that the freeze forced customers into paying more for electricity. The freeze was lifted in 2018.

The power company’s plans to build the Atlantic Coast pipeline and opposition to Virginia’s membership in RGGI also made it a target of environmentalists’ ire.

But Dominion has also signaled it is willing to substantially boost its investment in renewables. When Northam issued his executive order establishing renewable energy goals, the utility responded with a statement saying "challenge accepted" (Energywire, Sept. 19). Dominion recently announced plans to invest $8 billion in offshore wind.