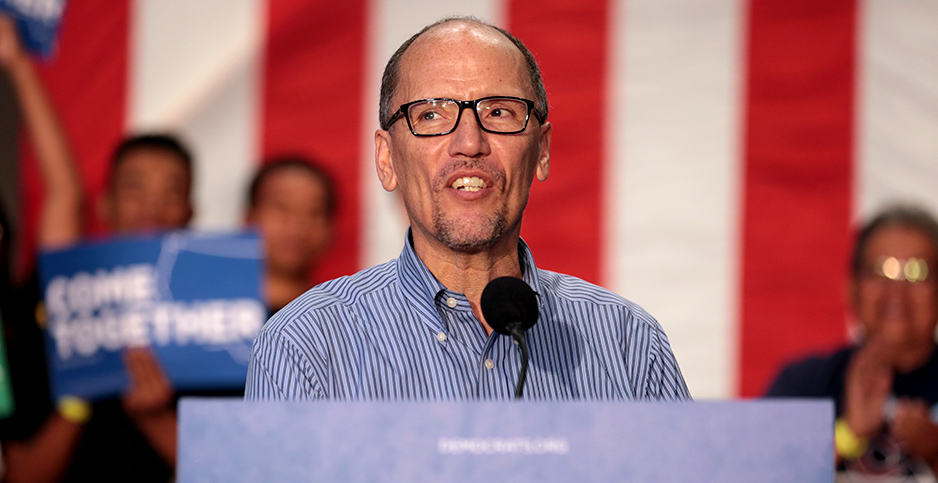 The Democratic Party added new climate change provisions championed by progressives to its 2020 policy platform this week and moved the plan closer to approval by the full Democratic National Committee.

The Democratic National Committee’s Platform Committee approved an amendment this week to endorse the goal to keep global warming less than 1.5 degrees Celsius above preindustrial times, and for the United States to do its "fair share" to reach that goal. The agreement took place during a virtual meeting that included DNC Chairman Tom Perez.

"As we go forward, we need to respond to what data and science are telling us," said Michelle Deatrick, a DNC member who leads the party committee’s Environment and Climate Crisis Council.

"This amendment embodies the kind of bold, science-based leadership we need as we move toward a more just, healthy and sustainable future that leaves no worker, no community, behind."

"What might appear as just decimal points on paper means the difference between life and death for millions around the world and here in the United States," Sunrise Movement Executive Director Varshini Prakash said in the meeting about the amendment.

The first draft of the platform, which was made public last week, included many progressive wishes, such as endorsing a 2035 date to get the nation’s electricity carbon-free (Greenwire, July 23). But the left nonetheless pushed for more aggressive policies, such as the 1.5 C statement.

The document, a nonbinding statement of the party’s priorities, now represents a compromise between progressives and more moderate Democrats.

Progressives, as embodied in a report from Deatrick’s council, had pushed for the party to agree to $16 trillion in federal spending on climate and clean energy and an end to all fossil fuel production, among other ambitious proposals (Greenwire, June 4).

Gina McCarthy, president of the Natural Resources Defense Council and former EPA administrator, spoke in the meeting to call the climate provisions in the platform "the most ambitious, most progressive climate language in our party’s history."

Deatrick is pleased with the changes the committee made. "These changes show significant progress over the 2016 Platform in several important ways, and that the Platform Committee has listened to the DNC Climate Council and heard the tens of thousands of activists across the country who are advocating for bolder solutions to the climate crisis," she said in a statement.

The version of the platform approved by the committee now goes to the full DNC for final approval at the Democratic National Convention next month.