Democrats advance climate bill as advocates gird for a fight 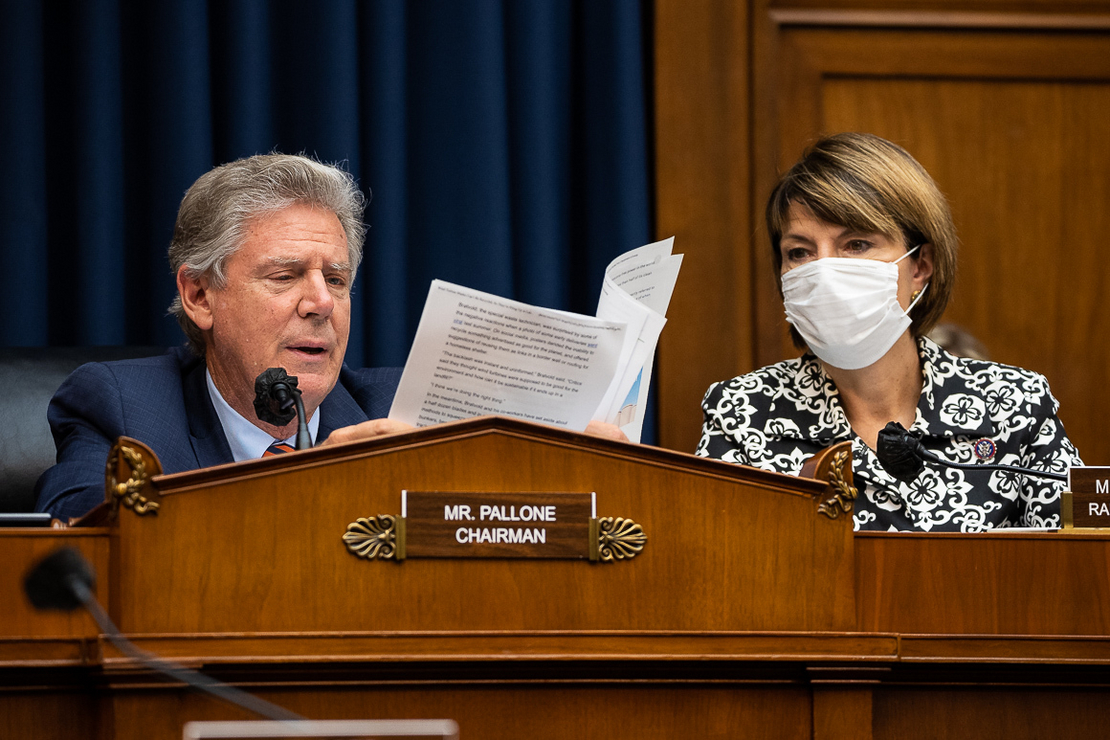 The House Energy and Commerce Committee passed a historic suite of climate and environmental policies in a marathon two-day markup, kicking off a pressure campaign as Democrats look to move quickly on their $3.5 trillion budget reconciliation package.

The panel’s $456 billion section of the bill includes funding for a huge variety of programs to boost electric vehicles, electric transmission and environmental justice, as well as a fee on methane emissions at oil and gas facilities (E&E Daily, Sept. 14).

The most consequential piece of the E&C portion, however, is the $150 billion Clean Electricity Performance Program, or CEPP (E&E News PM, Sept. 14). Along with the tax credit expansions making their way through the Ways and Means Committee this week, Democrats are hoping the policy could transform the power sector to 80 percent clean energy by 2030.

The panel, chaired by Rep. Frank Pallone (D-N.J.), is looking to wrap up its broader bill today after two days and more than two dozen hours of debate, but the most difficult political fights are still to come.

Senate Energy and Natural Resources Chair Joe Manchin (D-W.Va.) has said he opposes the CEPP and the $3.5 trillion in spending, complicating the path forward in the 50-50 Senate. Democrats also have few votes to lose in the House, and Rep. Kurt Schrader (D-Ore.), a member of E&C, is already set to oppose the package.

Democrats and environmental groups pointed yesterday to the wildfires in the West and recent hurricanes as evidence that action on climate remains urgent.

“Now it’s up to the rest of the Democratic caucus in the House and the Senate to deliver on this opportunity to create a just, thriving clean energy economy,” Evergreen Action Co-Director Sam Ricketts said in a statement after the committee passed the CEPP yesterday. “After a summer of devastating wildfires and catastrophic hurricanes, Americans are looking for climate leadership.”

Evergreen is also launching a six-figure ad campaign to back the CEPP, part of a raft of green group spending in recent weeks as the reconciliation debate heats up (E&E Daily, Sept. 14).

The group was heavily involved in drawing up and pushing for the proposal, which would offer grants to utilities that boost clean energy by at least 4 percent each year and assess fines for those that don’t.

“Let’s be honest: whether or not this historic legislation passes is largely on President Biden, and it will define his legacy,” Sunrise Executive Director Varshini Prakash said in a statement. “Joe Biden can’t be the climate President if he lets Joe Manchin and conservative Democrats get in his way of passing the boldest reconciliation package possible.”

Democrats will also have the clean energy industry and some utilities — many of which already have clean energy goals — behind them in the effort.

“Along with a stable, predictable and long-term clean energy tax platform, the Clean Electricity Performance Program can help decarbonize the grid by 80% over the next decade,” Gregory Wetstone, president and CEO of the American Council on Renewable Energy, said in a statement yesterday.

“Additionally, the transmission investments in the Energy and Commerce mark will grow our economy and provide meaningful support for the transmission buildout we’re going to need for America’s clean energy transition,” Wetstone added.

Republicans can’t do much to determine the outcome of the reconciliation vote, but they appear ready to use the climate provisions as a wedge issue for months to come.

They offered a long list of amendments to the energy subtitle of the bill on Monday night and yesterday. It ran the gamut from proposals to simply nix the CEPP from the bill to more nakedly political attempts to tie Democrats to China.

The panel also spent a significant amount of time Monday discussing defunding the police and critical race theory, culture war issues the GOP is drumming up ahead of the 2022 midterms.

One amendment, from Rep. David McKinley (D-W.Va.), would have added a sense of Congress supporting nuclear power to the bill. That, too, brought references to cultural divisions Republicans are hoping to ride to victory next year.

Fear about nuclear power in the environmental community, McKinley said, “is merely driven by the Hollywood elite.”

Although the amendment would have supported one specific power source, ranking member Cathy McMorris Rodgers (R-Wash.) said it is Democrats who are “selecting winners and losers.”

“The fact of the matter is nuclear plants in the United States of America are being shut down right now,” she said.

Democrats said the amendment was unnecessary, pointing to investments in nuclear in both the reconciliation bill and bipartisan infrastructure package, and voted down McKinley’s proposal. While the CEPP is largely an attempt to reduce the share of natural gas and coal that generates the nation’s power, it would also count nuclear power as clean energy eligible for a grant.

“Interestingly, the ‘Build Back Better Act’ makes the needed investments to keep our existing nuclear fleet open and spur the deployment of advanced nuclear energy,” Rep. Paul Tonko (D-N.Y.) said in response to McKinley’s amendment. “It provides a production tax credit for nuclear power and makes the government a major purchaser of clean power, such as advanced nuclear energy.”

Democrats also batted away Republican proposals to target forced labor in the critical minerals supply chain and ban funding from going to any entity owned by the Chinese Communist Party.