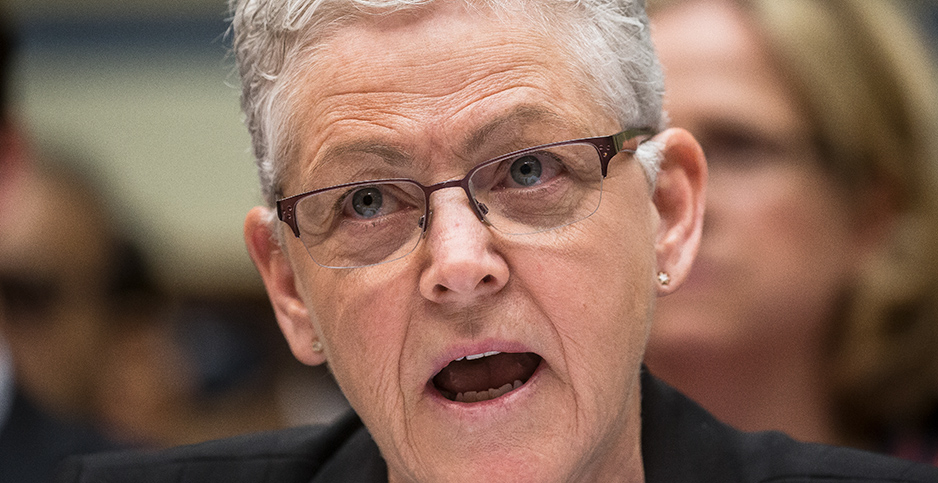 Former EPA Administrator Gina McCarthy and other Democratic luminaries are elevating climate change as an issue in the presidential race. Jeff Malet Photography/Newscom

The yearlong brawl among Democrats about how to tackle climate change has produced a counterintuitive result: The divided party seems to be working more closely than ever.

Environmental activists and establishment Democrats were feuding two months ago over who should challenge a president who rejects climate science. Since then, there’s been a flurry of coalitions and partnerships launched to heal the party’s internal wounds.

It’s a sign that the party’s climate machine is roaring to life in ways not seen in 2016, or perhaps ever.

The collaboration is part truce and part realignment as greens work to defeat their common enemies while responding to the economic and social crises wrought by the coronavirus pandemic.

Joint efforts span politics and policymaking, suggesting that although progressives lost important primaries this year — most glaringly for president — they are nevertheless poised to retain their influence, and possibly expand it.

The emerging consensus across the Democratic spectrum looks more and more as if it’s aligned with the views of climate hawks, said Sam Ricketts, a senior fellow at the Center for American Progress who has been active in bridging the gap between activist and establishment groups.

"There are varying degrees of emphasis," he said of the groups working together on climate issues. "But by and large, you’ve seen a congealing around standards, investments and justice."

Clean energy standards, massive government investment in research and infrastructure, and environmental justice — those are cornerstones of the Green New Deal, and now they’re getting more deeply integrated into the Democratic mainstream.

"You can call it a Green New Deal; you can call it whatever you want," said Jamal Raad, a co-founder of the climate group Evergreen Action.

"I think the coalescing is just a reflection that there’s two major goals of the climate movement right now: one, to defeat Donald Trump, and two, to gear up to pass policy next year for an all-out mobilization to defeat the climate crisis," he said.

To be sure, market-driven policies like a carbon tax still have support from key establishment figures like former Secretary of State John Kerry, who is co-chairing Biden’s climate task force. But the surge in green collaboration has also put Kerry in a position to defend the Green New Deal through a group unveiled last week.

Climate Power 2020 — a joint effort from the Center for American Progress, Sierra Club and League of Conservation Voters — launched last week with an advisory board populated by such party luminaries as Kerry, former Energy Secretary Ernest Moniz and John Podesta, a top figure in the Clinton and Obama White Houses.

It also includes major voices from the left.

The Sunrise Movement’s Varshini Prakash, who endorsed Sanders, sits on the board along with former campaign surrogates of Warren, like Rhiana Gunn-Wright, one of the Green New Deal’s original architects, and Ayana Elizabeth Johnson, founder of the Ocean Collectiv.

The goal of Climate Power 2020 is defeating Trump and congressional Republicans — and the group has explicitly pledged to fight "disinformation and false facts" about the Green New Deal.

That’s relatively new. A year ago, many center-left Democrats took a hands-off approach to the Green New Deal because some saw it as unrealistic, socialist or politically risky. Republicans and conservative media hammered the plan — and in the process, some Democrats now realize, the damage spread to more moderate climate policies.

"Our [expletive] team does not know how to fight to win," said one senior environmental leader, granted anonymity to speak freely. "We’re much more concerned with being policy-right or policy-nuanced than [expletive] winning."

While Republicans saw a chance to savage the Green New Deal, this person said, "our team sat on its ass" and debated the plan’s merits rather than counterattack.

"Here we are, a year later, having to fight the fight on the Green New Deal that we should’ve fought when it first surfaced," the environmentalist said.

Other signs of cooperation have been building.

Evergreen Action, the climate policy and advocacy group, was co-founded by Raad and Ricketts, both alumni of Inslee’s campaign. That group has pulled in supporters of Sanders and Warren to plot the next phases of climate action.

Raad also sits on the board of Climate Power 2020. So does Gina McCarthy, the head of the Natural Resources Defense Council Action Fund and another member of the Biden-Sanders climate task force.

That follows collaboration on GiveGreen — a fundraising platform from the NRDC Action Fund, the LCV Action Fund and NextGen America that directed $23 million to environmental candidates during the midterms — as well as GreenWave, a joint campaign from five of the biggest environmental groups to increase turnout among their members in 2018.

All those efforts have started to add up to something new, said Tiernan Sittenfeld, senior vice president of government affairs at LCV.

"We have long worked in partnership with other organizations," she said. "But I do think the level of collaboration and joint planning is really increased."

That’s a reflection of the moment in history, she said. Time is running out to curb catastrophic warming, and Trump’s reelection would choke out big new climate policies.

The cooperation is also the product of more than a decade of greens trying to ramp up their electoral muscle, dating back to environmental groups’ meager defense of Democrats after they voted for carbon cap-and-trade legislation in 2010.

This time, they say, they’ll be ready.

"We’re moving from a phase of contention and division within the party — broadly speaking — into one of alignment," said Julian Brave NoiseCat, vice president of policy and strategy for the think tank Data for Progress.

"The pieces are in place to try and make something happen on climate," he said.