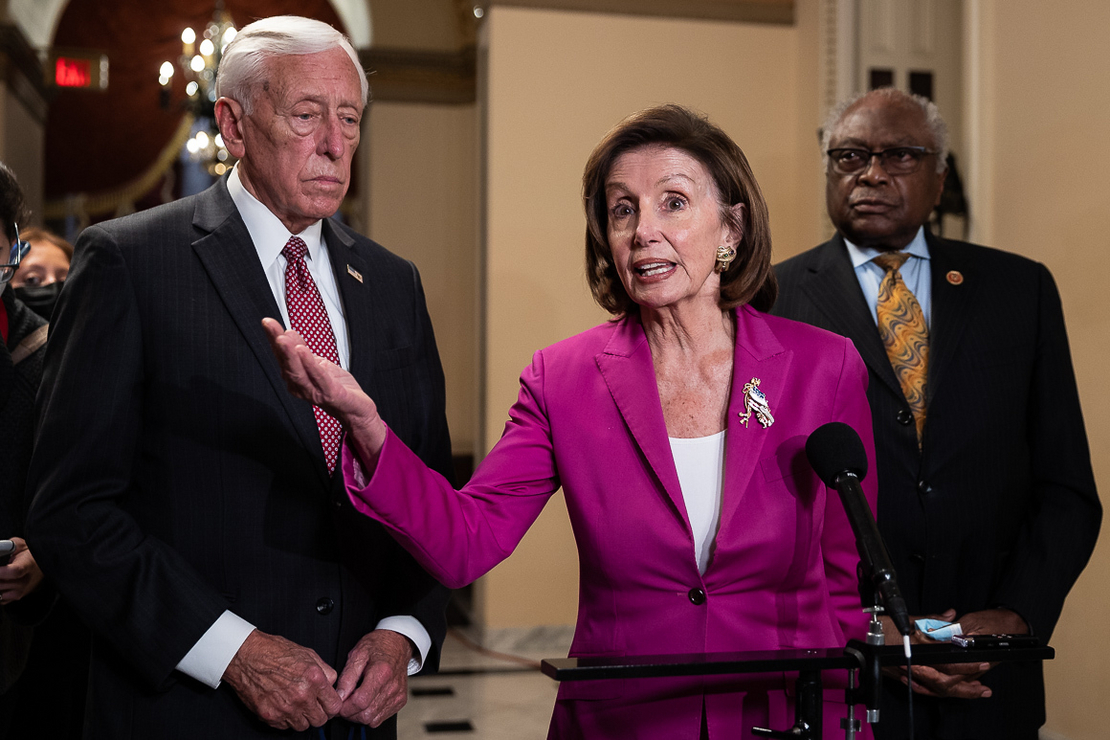 Congressional Democrats painted a rosy view this past weekend of the prospects for swift legislative action on their massive, $1.7 trillion climate and social spending package.

From the White House on Saturday, President Biden said without equivocation, “We will pass this in the House, and we’ll pass it in the Senate.”

From Glasgow, Scotland, on a panel at the United Nations climate talks, Sen. Ed Markey (D-Mass.) said his message to the entire international community was that the Senate would ultimately get the votes to advance the reconciliation bill, enabling Biden to meet his goal of achieving 50 percent emissions reductions below 2005 levels by the year 2030.

“We will get this job done,” said Markey of legislation that would invest roughly $550 billion to fight the climate crisis — the biggest federal investment in the environment in history.

And yesterday, White House chief of staff Ron Klain hammered the point home: “We are going to lead the world in tackling climate change,” he said on on NBC’s “Meet The Press,” adding, “We’re going to pass this bill and have the tools to do it.”

But simmering beneath this optimism are real uncertainties as to how lingering disagreements over the cost and content of the reconciliation bill, known as the “Build Back Better Act,” will get resolved and fulfill the many promises on climate action Democrats intend to tout in Glasgow over the next several days.

This past Friday, progressives finally agreed to clear the separate, $1 trillion bipartisan infrastructure package for the president’s signature, even without ironclad commitments from moderate Democratic Sens. Joe Manchin of West Virginia and Kyrsten Sinema of Arizona that they would vote for the separate, partisan bill. Those commitments had been a hard line that liberals had held on to for weeks.

Meanwhile, another dilemma emerged: House Democratic moderates said they would not support the reconciliation bill until it had received an official cost estimate from the nonpartisan Congressional Budget Office.

House Democratic leadership ultimately culled together the votes to pass the bipartisan infrastructure bill, 228-206, with all but six Democrats supporting and with help from 13 Republicans to make up the shortfall. Moderates essentially promised progressives they’d vote for the reconciliation bill once the CBO score is finalized.

At the same time, Congress took a procedural step, 221-213, regarding the reconciliation bill to bring that measure closer to a final passage vote the week of Nov. 15, when the House returns following the Veterans Day recess.

Rep. Josh Gottheimer (D-N.J.), one of the moderates who insisted the reconciliation bill be scored prior to a vote, said on CNN’s “State of the Union” yesterday he expected the score to be in line with White House projections, in which case he and his colleagues would back the bill as soon as next week.

Party leaders, however, are taking a tremendous gamble that the CBO score will be sufficient. They are now working against a much tighter deadline to resolve intraparty differences on multiple policy proposals by the year’s end, where the final weeks of December will also be consumed by other legislative battles relating to the appropriations process and the debt ceiling.

They are also putting tremendous trust in Biden’s ability to convince Manchin and Sinema to support the larger spending package, about which Manchin has expressed serious reservations while Sinema has stayed mostly mum.

Manchin released a statement late Friday praising action on the infrastructure bill, which he helped write in the Senate; Sinema tweeted similar sentiments on Saturday. Neither said anything about the reconciliation package.

‘You can turn the page on the Trump era’

The talking points following the chaos of last week, which culminated in a vote in the House on the bipartisan infrastructure bill in the early hours of Saturday morning, varied.

Biden’s allies took to the Sunday talk show circuit to tout the most recent legislative victory and assure the public the reconciliation bill, with its historic climate investments, was next on tap.

“What’s in our minds is the fact that the ‘Build Back Better’ plan that we’ve been talking about has the largest investment in American history to get us to a clean energy economy, to create millions of jobs in this country moving forward to sustainable, renewable energy,” Klain said

Markey, who earlier this summer helped popularize the #NoClimateNoDeal campaign on Capitol Hill, made clear he had no interest in sowing seeds of doubt in Glasgow.

“You can turn the page on the Trump era,” said Markey. “We’re putting these [clean energy] tax breaks on the books for a 10-year period, there will be a climate bank … a $220 billion in private-sector investment in new clean energy technology … a Civilian Climate Corps.”

Elsewhere, environmental advocates were making it very clear there would be political consequences for inaction on the reconciliation package, which contains the vast majority of the climate provisions for which environmentalists have been clamoring.

Manish Bapna, president and CEO of the Natural Resources Defense Council, said there was reason to cheer passage of the infrastructure bill only insofar as it “clear[ed] the way” for passage of the reconciliation measure.

“The infrastructure bill doesn’t confront the climate crisis,” Bapna said. “For that, we need Congress to enact the historic clean energy investment in the ‘Build Back Better Act’ without delay.”

“Today was not the historic day we’d hoped for,” she said in the hours after the House advanced the infrastructure bill but not the reconciliation deal. “Now is the time to finish the job, pass the Build Back Better Act and quickly get it to the President’s Desk.”

Some of the six Democrats who rebelled against passage of the infrastructure bill were far less diplomatic, giving voice to the deep anxieties and distrust about the next steps in this process.

In an hourlong, live question-and-answer session on Instagram, Rep. Alexandria Ocasio-Cortez (D-N.Y.), who like Omar also voted against the bill on Saturday morning, was insistent her Democratic colleagues had made a serious political miscalculation in giving up leverage over the reconciliation bill.

She also had few kind words to say about the bipartisan infrastructure bill, which by design was less aggressive in combating climate change in order to win over Republicans and moderate Democrats. Ocasio-Cortez argued the bipartisan agreement would not drive down emissions in a meaningful way, even contending it would result in increased emissions.

House Speaker Nancy Pelosi (D-Calif.), at 81 years old one of those older lawmakers Ocasio-Cortez referenced, was unapologetic about her strategy this past week, saying during floor remarks she had no worries the House would soon act to be “good stewards” of “this beautiful planet that is God’s creation.”

“I’m very pleased,” she told reporters. “Everybody expects everything to happen just like that, but it’s legislation, and we’re very pleased with a very strong vote on both bills.”