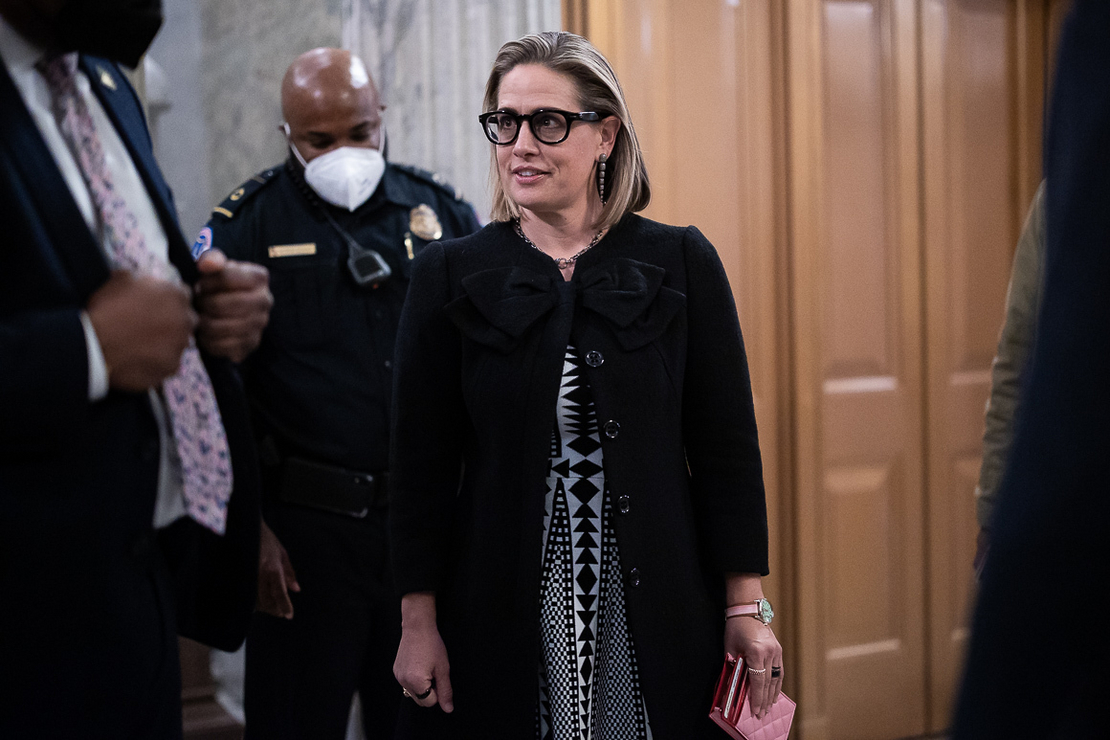 The future of the Manchin-Schumer climate deal may depend on the support of moderate Democratic Sen. Kyrsten Sinema of Arizona. Francis Chung/E&E News/POLITICO

The fate of the biggest climate bill in U.S. history could now hinge on one Arizona Democrat who’s refusing to publicly back the deal and isn’t afraid to ruffle feathers within her own party.

“Senator Sinema does not have comment as she’s reviewing the text and will need to see what comes out of the parliamentarian process,” her spokesperson Hannah Hurley told E&E News today.

Because Democrats are trying to pass the bill through a process known as budget reconciliation with a simple majority, the Senate’s rules expert must determine whether their legislation meets the requirements. The massive legislation also aims to raise $739 billion through tax and prescription drug reforms.

Climate bill advocates celebrated last week when the surprise climate deal was announced, but the mood has shifted into anxiety over Sinema’s support.

“Congress has sat on its hands” for decades “and done nothing on climate change, so to be this close and have one pivotal senator undecided leaves us all holding our breath,” said Jeremy Symons, an environmental and political strategist who has worked for decades on climate legislation.

Democrats, environmental advocates and others hoping to secure the bill’s passage are working publicly and behind the scenes to woo the Arizona senator.

“Kyrsten Sinema’s a friend of mine, and we work very close together,” Manchin said Sunday on NBC’s “Meet the Press.” He said she has a “tremendous amount of input in this piece of legislation.”

Manchin added: “I would like to think she would be favorable towards it, but I respect her decision. She’ll make her own decision based on the contents.”

‘Biggest and best shot on climate’

Environmental advocates say they’re hopeful that Sinema will back the legislation, pointing to her record on climate policies.

“We are so glad that she has made clear how much she cares about combating the climate crisis,” said Tiernan Sittenfeld, senior vice president of government affairs at the League of Conservation Voters.

The Arizona lawmaker has a lifetime environmental score of 79 percent from LCV, with a 97 percent score in 2021.

“We are really hopeful and optimistic that she will support this transformational progress,” Sittenfeld said of the climate deal pending in the Senate. “This is our biggest and best shot on climate.”

Sinema’s office is getting calls from environmentalists and clean energy advocates urging her to support the bill, said Sandy Bahr, director of the Sierra Club’s Grand Canyon Chapter. Bahr said her organization plans to drop off a petition tomorrow morning at Sinema’s office that basically says, “Look, we need you to support strong climate provisions. We just cannot put this off.”

The group is making the pitch that it’s good for Sinema’s home state, Bahr said. “I think that when she looks at the bill, which she’s doing, she’ll see that there are a lot of benefits … for Arizona and for individual Arizonans.”

The senator was once a Green Party activist in Arizona before she joined the Democratic Party. She’s now known as one of the U.S. senators who’s most willing to buck her party. She was even censured earlier this year by the Arizona Democratic Party for her opposition to eliminating the Senate filibuster.

Sinema, who’s up for reelection in 2024, may face political consequences back home if she doesn’t support the Democrats’ massive tax reform and climate deal, said Dan Weiss, a clean energy consultant.

If she doesn’t support the legislation, “she risks alienating her base, which could lead to Democratic primary or independent general election challengers in 2024,” Weiss said.

Rep. Ruben Gallego, an Arizona Democratic congressman who’s seen as a possible primary challenger to Sinema in the 2024 race, said last week that if she “had been having any town halls and actually meeting with people in Arizona, she would know that the Arizona voter wants some action on climate,” according to CNN’s Manu Raju.

‘A few more twists and turns’

Sinema’s support isn’t the only hurdle to finalizing the Senate climate deal, according to political experts who have witnessed the collapse of past climate bills.

“As someone who had a front-row seat as previous years’ climate change bills blew up in spectacular fashion, this is something that a lot of folks have been waiting for for a long time,” said Jim Manley, a Democratic strategist who was an aide to Senate Majority Leader Harry Reid in 2010, when House-passed climate legislation died in the Senate.

“I get the idea that Democrats are anxious to celebrate some wins, but there’s a few more twists and turns before this thing is signed into law,” Manley said.

In addition to the negotiations with Sinema and the Senate parliamentarian, there’s the potential that Republicans could force difficult votes on amendments, Manley noted.

There’s also the potential that Democrats will have trouble getting their entire caucus into the chamber for votes, given their slim majority and the spread of Covid-19.

“There’s still a lot of uncertainty here, but I’m pretty confident that we can get something done,” Manley said.

Symons, the environmental and political strategist, said, “This is the closest we’ve been and it’s the most significant package Congress has ever put forward” on climate change. But, he added, “it’s not done until the president gives away the pens.”