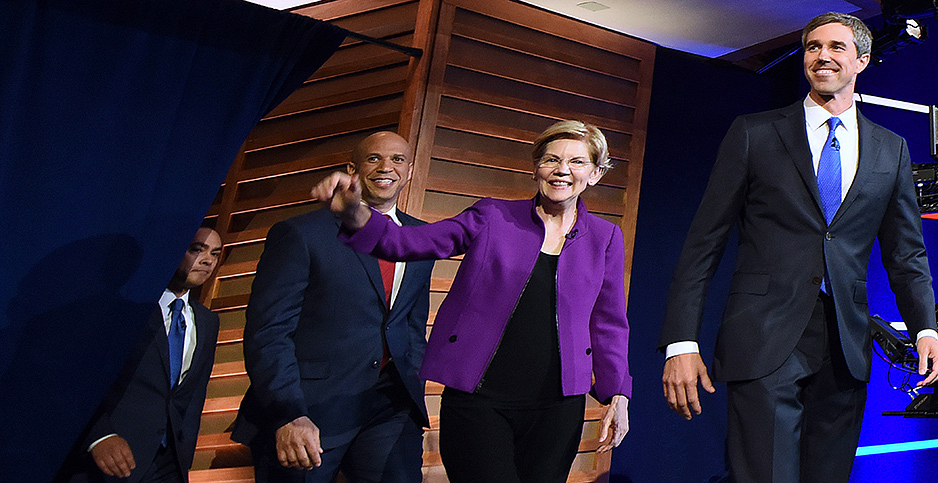 Oil and gas industry groups are sounding alarms about some of the climate change proposals from Democrats running for president, labeling them as impractical and economically disastrous.

The American Petroleum Institute and the Western Energy Alliance are criticizing multiple 2020 candidates for their proposals targeting oil and natural gas, including plans to ban fracking, stop all new leases to produce fossil fuels on federal land and phase out the use of fossil fuels entirely.

"It’s unfortunate that we’re in a place where Democrats think that stopping the energy that all Americans use is politically viable," said Kathleen Sgamma, president of the Western Energy Alliance. "There’s just a lot of misinformation in the public sphere about what’s possible with energy."

In an election cycle in which an unprecedented number of candidates are publishing detailed climate policy proposals, the oil industry’s discomfort with Democrats plans is not entirely surprising.

Candidates including Washington Gov. Jay Inslee, Vermont Sen. Bernie Sanders and former Texas Rep. Beto O’Rourke make no secret about their hostility toward the massive industries, and their elections would represent unprecedented threats to the sector and a 180-degree turn from the pro-fossil fuel administration of President Trump.

But it is rare for oil and natural gas companies to weigh in on candidates’ positions so early in the primary process — more than six months ahead of the Iowa caucuses, the first nominating event of the election cycle.

Nonetheless, the energy industry groups find it important to point out what they see as major pitfalls in the candidates’ ideas.

‘Affordable, reliable energy for all’

"These plans all seem to pit their goals against the working families who rely on affordable American energy in every facet of their daily lives," said Ben Marter, top spokesman for API.

"U.S. natural gas and oil is the one industry that is actually driving emissions down to their lowest levels in a generation, and API believes in a future where access to energy and opportunity is within reach for all people," he said.

API recently resurrected a 2017 analysis it commissioned from the firm OnLocation Inc., which examined a "keep it in the ground" scenario investigating bans on new fossil fuel leases on any land — fracking, mountaintop-removal coal mining and new fossil fuel infrastructure. The scenario is similar to some of Inslee’s proposals, though not identical.

The research forecast a loss of 5.9 million jobs, a loss of $11.8 trillion of gross domestic product and an average increase of $4,500 in energy costs per household per year.

For the Western Energy Alliance, which mainly represents oil and gas producers, the main concern is proposals to stop new fossil fuel leases on federal land.

The federal government owns a lot of the land in the West and sometimes owns mineral rights for land that has other surface owners.

By the alliance’s count, 13 of the 25 Democrats running for president have backed an end to new leases. Many promised to do so by executive order during their first days in office.

"It would put large parts of the West off-limits," Sgamma said.

"To an Elizabeth Warren," she added, referring to the senior senator from Massachusetts, "who has zero BLM lands in her state and doesn’t understand that federal lands are not all Yellowstone, it might not make sense."

Sgamma’s group also argues that such a policy would be illegal under the Mineral Leasing Act and the Federal Land Policy and Management Act.

"The law is pretty clear. FLPMA identifies oil and natural gas as a primary purpose of federal lands," Sgamma said. "And not all federal lands. It leaves considerable discretion to the secretary of the Interior on which lands are available and under what restrictions. But a blanket ‘no more development on federal lands’ is clearly not authorized."

A badge of honor

Some of the Democrats the industry is targeting defended their policies and criticized the oil and gas groups.

"It’s no surprise that big oil is unhappy with my bold plans to create 8 million jobs, provide 100% clean energy, and confront the fossil fuel industry. Big oil has raked in taxpayer subsidies by the billions while polluting our air free of charge," Inslee said in a statement to E&E News.

"We now need a President who isn’t afraid to look at fossil fuel CEOs in their eyes and tell them: the gravy train is over. We need freedom from fossil fuels, and I’m ready to lead that charge, no matter what fossil fuel-funded studies say," he said.

"The Western Energy Alliance is hellbent on opening up more and more of our iconic public lands across the West to oil and gas development; they want to drill anywhere and everywhere. The organization has one sole focus: more profits for oil and gas company CEOs," said Joe Calvello, a spokesman for Sanders.

"When we are in the White House we are going to keep our air and water clean, keep our public lands open for all to explore, and preserve a livable planet for our kids and grandchildren to enjoy — not continue to help the fossil fuel industry profit," said Calvello.

"Climate change is the biggest threat we face, and we need a president who will put the health and safety of the people before the profits of corporate polluters," she said.