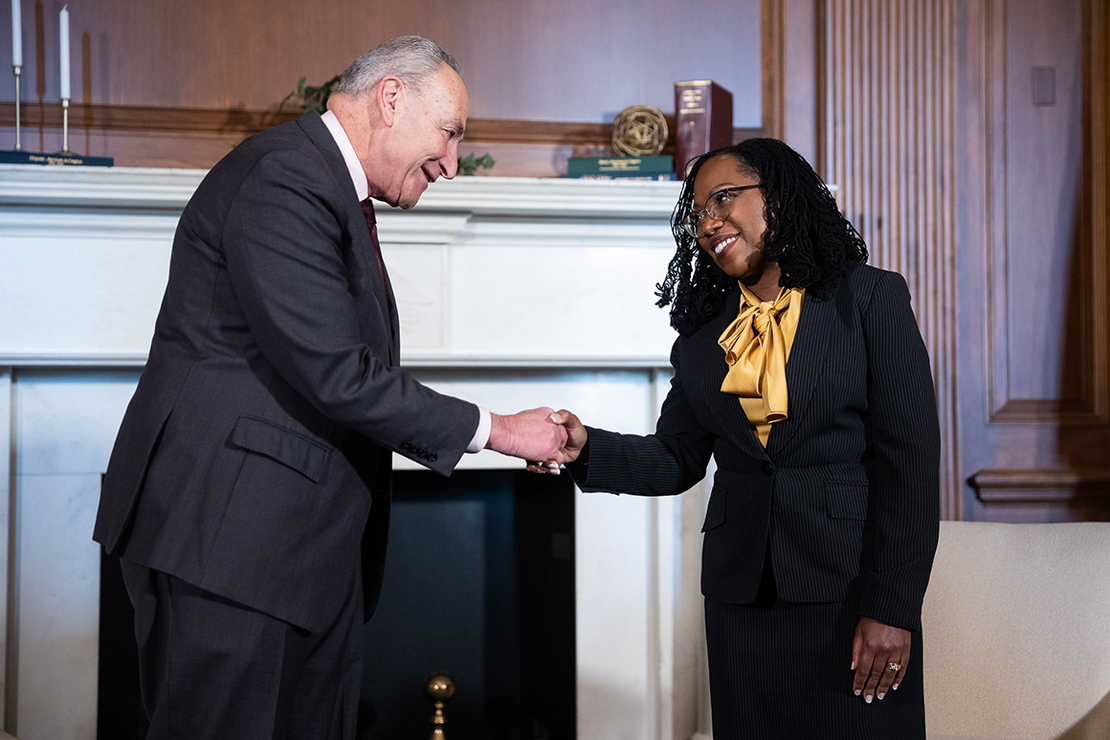 Supreme Court nominee Ketanji Brown Jackson began making the rounds yesterday in the Senate as Democrats pressed for her speedy confirmation, one they hope will draw some Republican support.

Once approved by the committee, Democrats are aiming to have her confirmed by the full Senate before they leave for a two-week Easter recess on April 8. The time frame would fit a recent average of confirming Supreme Court picks about 40 days after they are nominated.

“I think she deserves support from the other side of the aisle, and I am hopeful that a good number of Republicans will vote for her given who she is, and when they meet her they will just be wowed as I was,” said Senate Majority Leader Chuck Schumer (D-N.Y.), who was one of four senators to meet in private, one-on-one sessions with Jackson yesterday.

Jackson, who currently is a judge on the U.S. Court of Appeals for the District of Columbia Circuit, also met yesterday with Durbin, Senate Minority Leader Mitch McConnell (R-Ky.) and Sen. Charles Grassley (R-Iowa), the ranking member on Judiciary.

Durbin after the meeting praised her “outstanding” judicial record and noted she won bipartisan support on three other occasions when the Senate confirmed her. They included a post on the U.S. Sentencing Commission, a district judgeship and last year for an opening on the appeals court.

Grassley said his meeting with Jackson was a “get acquainted” session and he would save his questions regarding judicial philosophy for the hearing or seek written responses. He said all 10 GOP Judiciary Committee members should have the chance to meet with her ahead of the hearings.

Sen. John Cornyn, a Judiciary Committee member, said he’s meeting individually with Jackson next Thursday. He said there is not “a lot of mystery” around her nomination since she was confirmed by the Senate and vetted by the committee for the appeals court post only last year.

“Given the fact that she is not going to change the ideological balance on the court, I think people will be respectful and do their due diligence and ask questions, but I think we have pretty good idea what the outcome is likely to be unless there’s a big surprise,” the Texas Republican said.

Cornyn, who opposed her nomination to the appeals court, said Jackson would “probably” be confirmed. He said he was not sure if there would be any GOP support.

Three Republican senators — Lindsey Graham of South Carolina, Lisa Murkowski of Alaska and Susan Collins of Maine — backed her nomination last year, but the trio has yet to commit to supporting her again.

Durbin said he has begun reaching out to some GOP senators but declined to name them.

“My first appeal to them is always history. I always try to be on the right side of history,” said Durbin, noting there have been about 150 Supreme Court justices in the nation’s history and Jackson would be the first Black women to sit on the high court.

If all 50 Democratic senators back Jackson, she could be confirmed without any GOP support with Vice President Kamala Harris delivering the tie-breaking vote.