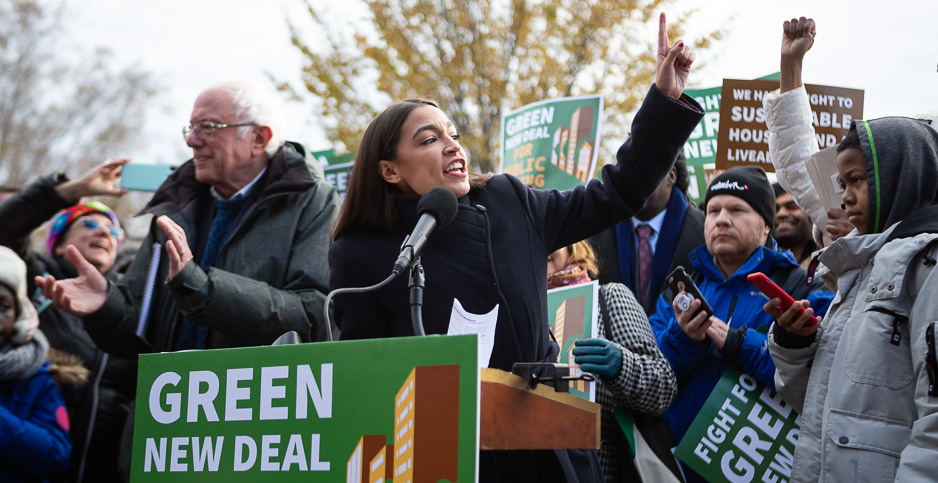 A flurry of advocacy and policy initiatives around Capitol Hill this week almost made it look as if Congress were moving on climate policy.

The Select Committee on the Climate Crisis yesterday heard policy proposals from members outside the panel, ideas that will be incorporated into its final report due out in March of next year.

In short, Democrats and climate advocates are starting to more seriously float ideas for what will eventually be a massively complicated and cross-jurisdictional policy effort.

But all the reports, legislation and broad working proposals also served to show how far Congress is from meaningful action on climate change — and how far ahead the business and advocacy communities are on the issue.

And realistically, they don’t portend near-term movement. House Democrats fully acknowledge that their eyes are on 2021, when they’re hoping to control the White House and, potentially, the Senate.

On that front, rank-and-file members have generally praised Reps. Kathy Castor (D-Fla.), chairwoman of the select committee, and Paul Tonko (D-N.Y.), chairman of the Energy and Commerce Subcommittee on Environment and Climate Change, who are leading separate efforts to develop economywide policies to reduce emissions.

The pair will meet today, along with full E&C Chairman Frank Pallone (D-N.J.), to discuss how the select committee’s report will overlap with or complement E&C’s "100 by 2050" goal, which the panel hopes to turn into draft legislation by the end of the year (E&E News PM, July 23).

"Just a get-together, banter update on where we see things heading, but it’s the start of a lot of stuff that’s coming onto the table," Tonko said in an interview.

Tonko added he’s aiming to have a "draft bill" by the end of the year, though it would likely be a broad overview — without a specific carbon pricing mechanism, for example. Tonko is also involved in a related legislative effort brewing to craft a "100% Clean Economy Act" alongside other lawmakers on and off E&C.

Castor, meanwhile, said her report will likely have a broad outline of principles and goals, accompanied by recommendations for specific legislation that members bring to the committee. The goal, she said, is to be "working in concert" with E&C.

Transportation and Infrastructure Chairman Peter DeFazio (D-Ore.), meanwhile, said he’s working on his own cap-and-dividend proposal that would set an income limit to receive a check from the federal government.

The idea, DeFazio said in an interview, is to ensure that billionaires don’t get a check from the federal government derived from a price on carbon. Instead, that money could either go back to people with lower incomes or toward research and development.

He hopes to circulate the measure to other lawmakers and introduce it in the coming months.

"There’s a whole host of things out there, so maybe putting some of the money we collect from the wealthy in the cap and dividend could go into that kind of federal research," DeFazio said in an interview. "I haven’t quite finished drafting it yet. We should have a bill pretty soon."

‘A lot of bruises’

All of those efforts amount, essentially, to the work of a think tank, and although Democrats are often optimistic about serious efforts on the floor in the future, they acknowledge it will be a heavy lift.

"It’s great that we have the Democratic votes in the House, but here’s reality: We’ve got to get this through a Republican Senate," said Rep. Debbie Dingell (D-Mich.), who is helping craft the "100% Clean Economy Act."

Speaking at a Center for American Progress event on the topic yesterday, Dingell also said business and labor need to be on board with that goal and how to attain it.

"I can tell you that the three of us here are going to get that bill through Congress," she said, referring to Tonko and Rep. Joe Neguse (D-Colo.), who also spoke at the CAP forum on clean energy. "We might have a lot of bruises, like I do, but we’re going to get it done."

There’s also the tricky issue of intraparty divides on just how progressive climate policy should be.

The massive economic transformations and government spending programs laid out in legislation such as the "Green New Deal for Public Housing Act" — the bill Ocasio-Cortez and Sanders unveiled yesterday — don’t always sit well with the moderates who make up swaths of the Democratic caucus.

Rep. Scott Peters (D-Calif.), a moderate active on climate and energy issues, used part of his time before the select committee yesterday to make exactly that point about the Green New Deal resolution Ocasio-Cortez introduced earlier this year.

"While I agree with just about every policy in the Green New Deal that has to do with climate, it also calls for major, expensive societal overhauls, like a federal jobs guarantee and free college for every American," Peters told the panel. "And we can debate those policies separately without burdening the already daunting task of climate action with these extra requirements."

At the same time, other lawmakers, particularly supporters of the Green New Deal, argue that with so many different policies needed to tackle climate change across the economy, it’s good to have everything on the table.

"The way that I’ve thought about this is there’s no panacea," said Neguse, a Green New Deal co-sponsor. "Ultimately, these ideas aren’t mutually exclusive."

Still, outside the kind of sweeping policies unlikely to pass in divided government, lawmakers and advocates alike remain hopeful they can nibble around the edges with energy innovation and resilience policies that have bipartisan support.

Sections of the U.S. corporate community are especially keen on that front, both to advance their own business interests and to shape public relations in the face of shifting public opinion on climate.

As a model for Congress, the Center for Climate and Energy Solutions (C2ES) released a report this week, with input from utilities and other companies, that lays out both larger climate policies and ideas that could be feasible in the near term.

The report recommends establishing a formal goal to decarbonize by 2050 and some form of economywide price on carbon. But it also suggests expanding Department of Energy clean energy research and further tweaking the 45Q tax credit, both ideas that are floating around Capitol Hill now on a bipartisan basis.

On the Hill, big business could help push that message, particularly to Republicans, so long as it’s "more than halfhearted lip service," Beyer said.

Exelon Corp. has long advocated for a price on carbon, in part to create better economics for its large nuclear fleet. But now customers are starting to drive even greater demand for clean energy, Kenneth Cornew, president and CEO of Exelon Generation, said at an event this week announcing the C2ES report.

"I do feel like there’s positive momentum from industry, from the environmental community, and I think that’s starting to come together," he said.

And that’s starting to percolate in Congress. While Republicans, by and large, still do not support policies as aggressive as a price on carbon, Rep. Garret Graves (R-La.) said he’s heard plenty of corporate support for energy innovation.

In this Congress, Graves said he’s looking for "narrowly focused bills" rather than "one bill to save the world."