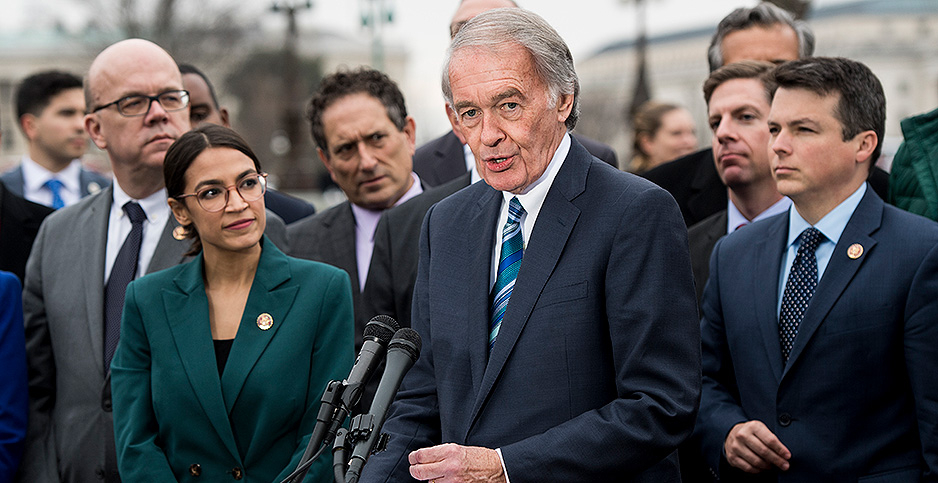 Democrats dueled for press coverage on their climate agendas this morning, much to the pleasure of major environmental groups that helped them take back the House.

"Today is the day that we truly embark on a comprehensive agenda of economic, social and racial justice," said Ocasio-Cortez.

The release came on the same day that House Speaker Nancy Pelosi (D-Calif.) made public the members of the newly minted Select Committee on the Climate Crisis, highlighting divides in the party about how to message on climate and just how aggressively to tackle emissions.

Pelosi, like Ocasio-Cortez, warned of the "existential threat" caused by climate change and promised bold action as "time is of the essence."

The speaker did not endorse any single strategy but instead called for considering the health and national security impacts caused by a changing climate, preserving and providing more green technology jobs, and building infrastructure in a "green informed way."

Both announcements drew widespread praise from environmental groups, including from bigger organizations such as the League of Conservation Voters, which had initially been hesitant to weigh in publicly on the "Green New Deal."

"We are thrilled to see so many members of Congress following through on the climate action that voters clearly said they wanted from their leaders on Election Day, including 100% clean, renewable energy, major investments in climate-smart infrastructure and efficiency, good-paying jobs, and a just transition for workers and communities hardest hit by pollution," he said.

Sierra Club Executive Director Michael Brune similarly called the resolution a climate plan "at the speed and scale that science and justice demand," but reactions otherwise have been mixed.

For one thing, Republicans are poised to fight the "Green New Deal" tooth and nail. Several GOP members of the House Energy and Commerce Subcommittee on Environment and Climate Change railed against the idea at a hearing on climate change yesterday, and it looks to be the party’s messaging tool of choice to oppose Democratic climate policies (E&E Daily, Feb. 7).

Pelosi and Democratic leadership have their own ideas about climate change, and they haven’t been eager to jump on board quickly with the "Green New Deal."

"Quite frankly, I have not seen it, but I do know it’s enthusiastic, and we welcome all the enthusiasm that is out there," said Pelosi, when asked by reporters about the plan.

Pelosi instead touted the Select Committee on the Climate Crisis that she created to make recommendations to the permanent House committees for writing legislation to fight climate change. She seemed to take a poke at the wide-ranging "Green New Deal" by suggesting the committees would take an "evidence-based, well-defined approach."

"The ‘Green New Deal’ points out the fact that the public is much more aware of the challenge that we face, and that is a good thing because public sentiment will help us pass the most bold initiatives," she said.

Though it’s not yet a hard policy proposal, the "Green New Deal" goes beyond the carbon-pricing plans favored by many Democrats.

"It’s not a bill. It is a resolution. And what that resolution is saying, this is our first step," said Ocasio-Cortez, touting more than 60 co-sponsors.

The resolution would call for a 10-year national mobilization, involving heavy investments in infrastructure and the energy industry, with the goal of moving to net-zero greenhouse gas emissions and providing a just transition for communities and workers.

During the "Green New Deal" press conference, Ocasio-Cortez spoke about West Virginia coal miners and Sen. Ron Wyden (D-Ore.) spoke about using his perch on the Finance Committee to push proposals related to the plan.

Some progressive environmental groups, however, lamented that the resolution does not explicitly ban fossil fuels. Friends of the Earth President Erich Pica called it "a strong vision for the future, stuck in the politics of today."

"We enthusiastically endorse the many pieces of the resolution that call for systemic change," she said in a statement. "But by failing to expressly call for an end of the fossil fuel era, the resolution misses an opportunity to define the scope of the challenge."

Still, the resolution will undoubtedly be a marquee document for the Sunrise Movement, the group that’s been pushing hardest for it after a protest in Pelosi’s office last year.

The group wants to make sure every Democratic presidential candidate signs onto the plan.

"We’re going to press all elected officials, especially 2020 contenders, to support this resolution," Stephen O’Hanlon, Sunrise’s communications director, said in a statement. "Where they stand on the resolution will make it clear who is using the Green New Deal as a buzzword and who is serious about transforming our economy in line with what science and justice demand."