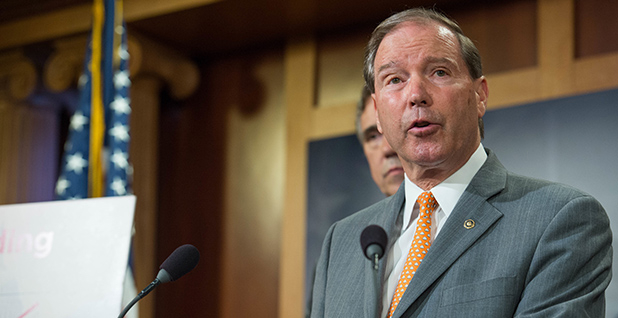 Sen. Tom Udall (D-N.M.) will introduce legislation today requiring all states to generate a growing percentage of renewable electricity annually until at least 50% of the nation’s mix comes from green sources by 2035.

Udall’s renewable electricity standard (RES) aims to capitalize on growing state efforts to boost the generation of clean and renewable electricity by requiring all states to meet a federal "floor-setting standard" of 1.5% starting in 2020 for utilities with more than 1 million megawatt-hours.

Under the measure, that standard would increase to 2% in 2021 before maxing out at 2.5% in 2030. For utilities under 1 million MWh, the schedule is half the rate of the larger utilities.

But Smith is also a co-sponsor of Udall’s RES, which is also backed by Sens. Martin Heinrich (D-N.M.) and Sheldon Whitehouse (D-R.I.). In the House, Rep. Peter Welch (D-Vt.) is expected to introduce a companion bill.

The emphasis on renewables in Udall’s bill reflects a policy preference he has pushed for more than two decades, including as a House member, where he saw his proposals pass the chamber on several occasions only to be ignored by the Senate.

But with the ascension of Democrats to the House majority this year, the concept of national electricity mandates is getting a second look (E&E News PM, March 20).

To avoid past squabbling that has previously stalled the enactment of such legislation, Udall’s bill only applies to new generation starting in 2020, which an aide said yesterday levels the playing field for all states by reducing regional disparities.

Each kilowatt-hour of electricity generated by a new renewable resource would be entitled to a regional electricity credit (REC), which would be turned in to measure compliance. Most existing renewable generation would not be eligible for RECs, although a fact sheet notes that "some small exceptions apply."

The Energy Department would be placed in charge of monitoring compliance under the bill, which would make changes to the Public Utility Regulatory Policies Act.

States with RESs or low-carbon energy standards at or above the minimum federal standard could opt out of the plan, as could states with generation mixes of at least 60% renewables. States are allowed three years of banking and borrowing RECs.

According to the fact sheet, the bill would result in at least 50% renewable electricity nationwide by 2035 — "roughly doubling business as usual" — with the DOE secretary required to submit a plan to Congress for post-2035 changes to achieve "zero-carbon in the utility sector."

The measure aims to incentivize renewable development in Native American communities and "impacted communities" by providing double credits for new generation in such areas.

Communities qualifying for this treatment include those "economically distressed" by environmental pollution or degradation, or those with high unemployment caused by a decline in coal mining or the closure of a coal-fired power plant.

According to a Union of Concerned Scientists (UCS) analysis cited in the fact sheet, the bill would result in 38% less natural gas and 97% less coal in 2035. It would encourage $359 billion in new capital investment between 2020 and 2035 and reduce carbon emissions by 46% in 2035.

A Udall aide said conversations are ongoing with Energy and Natural Resources Chairwoman Lisa Murkowski (R-Alaska) and ranking member Joe Manchin (D-W.Va.) about holding a hearing on the bill, which Udall would likely try to include if a broad energy package emerges.