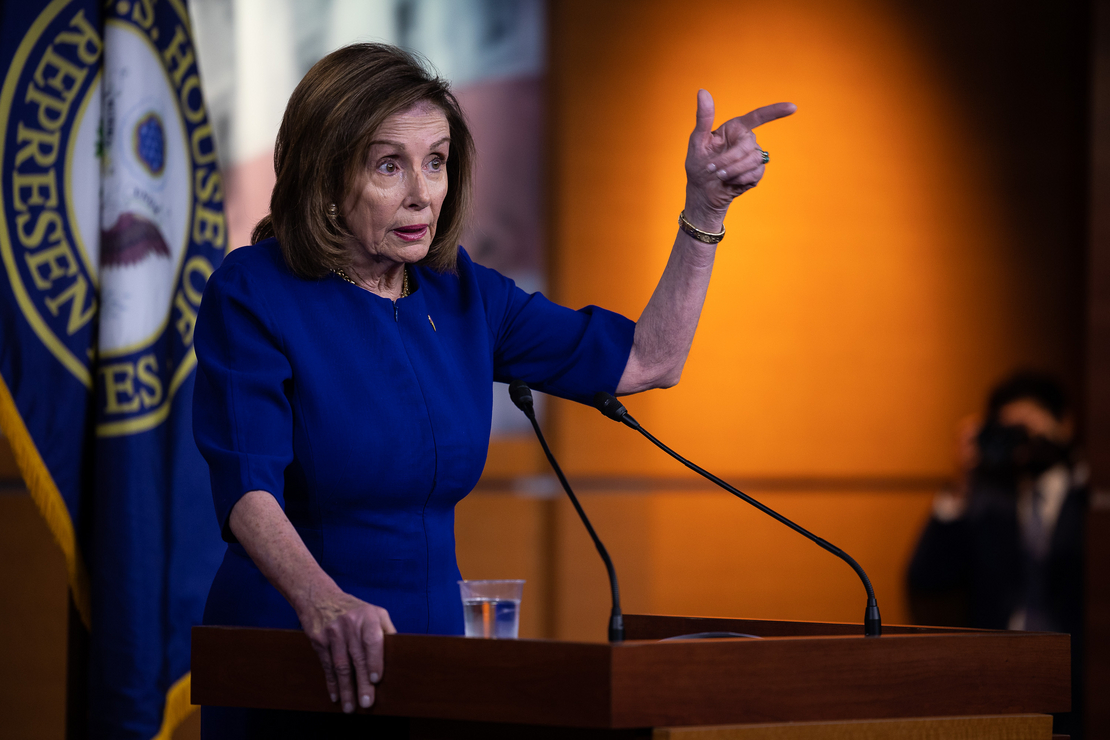 Congressional Democrats are showing interest in moving legislation that would reflect, and even go beyond, the latest White House proposals for bringing down soaring gas prices.

She also signaled an openness to White House calls for Congress to pass federal energy leasing reforms. Democrats have also floated gas rebates for consumers, but the administration has yet to embrace that idea.

“Right now, of course, we have the Putin price hike at the pump, and it’s something that has to be addressed,” she told reporters in her weekly press conference, referring to Russian President Vladimir Putin, whose invasion of Ukraine in February scrambled energy markets. “There are a number of options on the table.”

Pelosi twice mentioned that Democrats are eager to find ways to increase domestic energy production on federal land by noting there are more than 9,000 unused leases. She suggested options could include a “use it or lose it” policy for leaseholders or charging them for failing to pursue active energy exploration.

Cracking down on used energy leases on federal land also has the crucial support of Senate Energy and Natural Resources Chair Joe Manchin (D-W.Va.). He said energy companies should not be able to hold on to federal leases indefinitely that can otherwise quickly be permitted for production.

“The fees are too low. You can hold a lease fee for almost nothing from the federal government; you can’t do that in the private sector,” Manchin told reporters yesterday. “It’s not a penalty [to increase federal leasing fees], just make them comparable in the marketplace.”

Asked specifically about a “use it or lose it” policy, Manchin said he would first need to look at the specific proposal, but he has in the past been skeptical of that approach.

Pelosi seemed to dismiss the idea of delivering a gasoline rebate by temporarily lifting the 18-cent-per-gallon federal gasoline tax. She said there is no way to write a bill implementing a gas tax holiday that would guarantee consumers, not oil companies, benefit from eliminating the fee.

That’s one reason Transportation and Infrastructure Chair Peter DeFazio (D-Ore.) has rejected calls in the Senate for a federal gasoline tax moratorium. Some states have moved forward with their own suspensions.

‘A lot of interest’ in rebate

Exactly how and when Congress could move gas price legislation remains to be seen. Democrats are especially eager to take action to drive down energy costs as polls show high inflation is hurting their midterm election prospects.

Pelosi said she expects the proposals to be written by the Energy and Commerce Committee, although not until after it has hearings. Those begin next week with six oil executives due to testify before a panel subcommittee on charges of price gouging (E&E Daily, March 30).

If a tax holiday isn’t in the cards, one option could be sending out direct federal payments to consumers based on their gasoline use, an idea gaining traction among Democrats.

When it comes to a possible gas rebate, Rep. Dan Kildee (D-Mich.) said, “There’s a lot of interest in it.” But the chief deputy majority whip added: “Figuring out a way to do it so that it’s highly targeted and easily administered is another question.”

Rep. Jared Huffman (D-Calif.), a senior member of the Natural Resources Committee, which has jurisdiction over drilling on public lands and waters, said environmentally minded lawmakers have long backed leasing reforms and he’d welcome them being implemented via legislation. He also said he’d support a gas rebate, despite some concerns it would encourage more driving.

“I don’t think it’s going to open the floodgates to fossil fuel consumption,” he said. “We can target it to people who have no choice but to drive and really need some help.”

In the Senate, any legislation would need 60 votes to advance, an unlikely possibility given GOP opposition.

But an option could be trying it to the “Build Back Better” climate and social spending package Democrats are hoping to revive by summer. It would move under budget reconciliation rules that require only 50 votes.

“Build Back Better,” for example, already includes increased royalty rates for oil and gas leases (E&E Daily, Oct. 29, 2021). That proposal has survived Manchin’s deep scrutiny of the bill, but he has also called for policies to promote fossil fuel production (E&E Daily, March 23).

“We need to choose long-term security over energy and climate vulnerability. We need to double down on our commitment to clean energy and tackling the climate crisis with our partners and allies around the world. And we can do that by passing my plan that’s literally before the Senate right now,” he said.

“There are lots of different reasons why you might hold on to something for a period of time,” Sen. Lisa Murkowski (R-Alaska) said yesterday. “And so how you would define what ‘using it’ means — I don’t know how we would write that.”

Murkowski also noted that as a pro-production policy, “use it or lose it” could mean different things in different regions of the country.

“I come from a state where it takes you 10 years to get oil into the pipe, so for us, it’s not really a practical direction,” Murkowski said. “It may prove to be much more practical in the world of shale down in the lower 48, where you have greater ability to ramp things up.”

But there’s also a case to be made that speculative leasing, where oil companies might own a lease with no oil and gas reserves, is bad natural resources policy.

“I don’t know if that’s the right solution or not,” Sen. Martin Heinrich (D-N.M.) told reporters. “But we do have a problem with both unused leases that could be produced and unused leases that were leased completely speculatively, where we don’t think there’s any resource.”

If a company hangs on to a lease without a profitable reserve of oil and gas, Heinrich said, “that’s taking other resources and other uses off the table in those areas in a way that’s not really fair to the rest of the community.”

Pelosi said a guiding principle for any legislation would be environmental protection.

“We cannot allow the fossil fuel industry to use this [the Ukraine war] as an excuse to reverse everything we are going to save the planet,” she said.