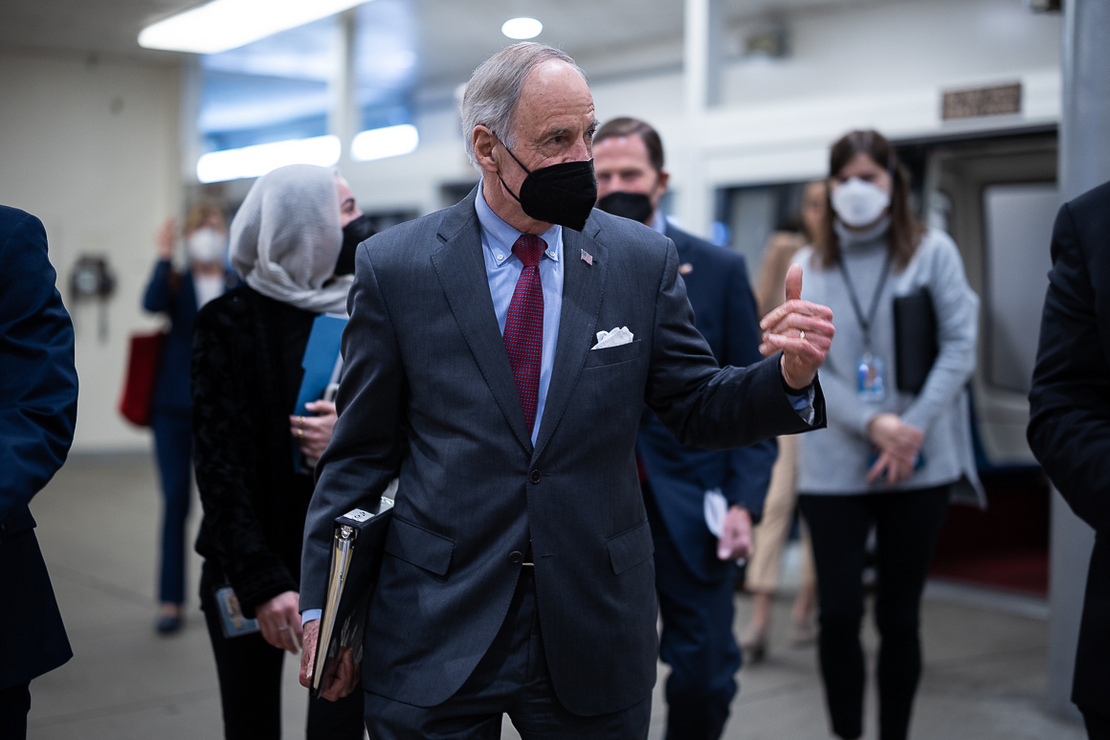 While signs point to a potential revival of a long-stalled climate and social spending bill, Democrats sought yesterday to amplify their push for a clean energy future amid high gas prices and Russia’s invasion of Ukraine.

During a Senate Environment and Public Works Committee hearing, Democrats argued that clean energy and electric vehicles were the solution to global oil and gas price shocks that also address climate change spurred by burning fossil fuels. That refrain has been employed repeatedly by Democrats since the war began.

“Since the Arab oil embargo of 1973, many in Washington have argued that if we just drill for more oil, we could be free of the price whiplash caused by international disruptions in the global oil market,” said Chair Tom Carper (D-Del.). “That wasn’t true during the Arab oil embargo, and it isn’t true today.”

The hearing was further indication that if the $1.7 trillion “Build Back Better Act” is to be revived, it will be repackaged as an energy security and anti-inflation measure.

Carper, in an interview afterward, said talks are ongoing between his panel and Energy and Natural Resources Chair Joe Manchin (D-W.Va.), the swing vote whose concerns effectively killed the bill late last year. Manchin has recently signaled he is ready to reengage in negotiations and increasingly views the next two months as a crucial time to strike a deal (E&E Daily, March 23).

“He and I and our staff have had an ongoing conversation for a while,” Carper said. “And I think he can play a very constructive role, and I believe he has motivation to do that.”

What, exactly, a revived bill looks like is up in the air. Manchin has said he is mostly on board with the bill’s $555 billion in climate spending and clean energy tax credits, save for a few objections to a methane fee and a new incentive for union-made electric vehicles.

But he may also be looking to revamp the Energy and Natural Resources Committee’s portion of the reconciliation legislation to better fit the current political and economic circumstances.

In the hearing yesterday, Carper warned: “As long as our economy runs mostly on fossil fuels, energy prices will continue to be vulnerable to forces outside the United States, and that’s not energy security.”

That line of argument ran into the same partisan divides that have defined the immediate congressional response since the beginning of the conflict in Ukraine, with Republicans blaming President Biden’s policies — particularly his cancellation of the Keystone XL pipeline and pause on oil and gas leasing — for high gas prices. Those arguments, however, often lack nuance (E&E Daily, March 15).

During the hearing, Democrats highlighted various provisions of the stalled reconciliation bill, particularly clean energy tax incentives and policies to boost electric vehicle deployment, and framed them in the context of the Russian invasion and roiling oil markets.

Sen. Ed Markey (D-Mass.) said the geopolitical situation should be “our moment, our signal to be able to move to the future.”

Sen. Ben Cardin (D-Md.) similarly argued that clean energy would allow the United States to insulate itself from global oil shocks if it can develop a robust domestic supply chain. On top of its renewable provisions, Cardin noted that the original “Build Back Better Act” would offer a new production tax credit for nuclear energy in an effort to keep existing plants online.

Still, witnesses told the committee there would be hurdles to Democratic ambitions.

“Natural gas is playing an increasingly important role in co-op reliability and emission reductions, often replacing coal generation,” Matheson said during the hearing. “But even as coal capacity declines, it remains a critical source of reliable, affordable power for co-ops in many regions of the country.”

Matheson and other witnesses also stressed the need for further permitting reform to allow transmission projects, renewables and oil and gas wells to be built more quickly.

It’s a longtime point of emphasis, and occasionally bipartisan consensus, for the committee. The bipartisan infrastructure law signed by Biden last year codified parts of President Trump’s “one federal decision” policy in an attempt to slim down permitting bureaucracy.

Ranking member Shelley Moore Capito (R-W.Va.) called for further action to limit permitting hurdles, an idea that could draw support from some Democrats, including Manchin.

“There’s been efforts and talk about streamlining in Congress for years about this, but we don’t seem to be solving the problem,” Matheson said.

“The frustration is palpable, and it’s real,” he added. “And wherever we go with our energy future in this country, this question of siting facilities is going to be part of the answer.”

But whatever the timeline, the energy transition is undoubtedly coming, said Katherine Stainken, vice president of policy at the Electrification Coalition. That’s particularly true for electric vehicles, with major auto manufacturers pledging to go all electric in the coming decades.

“I think a lot of us agree here that electric vehicles are the future,” Stainken said. “And it’s not a matter of if. It’s just when.”

The Republican opposition campaign, meanwhile, is only intensifying, and it could reverberate through other congressional committees in the coming weeks.

With Democrats looking to hold hearings on what they view as oil price gouging, the GOP is hoping to haul in Biden administration officials to testify alongside company executives.

If the Senate Energy and Natural Resources Committee ends up as the venue for such a hearing, ranking member John Barrasso (R-Wyo.) said he would be inclined to invite special climate envoy John Kerry to justify calls to divest from fossil fuels.

House Energy Republicans already invited Energy Secretary Jennifer Granholm to testify with oil and gas bosses during a potential hearing next month on the other side of Capitol Hill (E&E Daily, March 23).

“Democrats say they want to bring in energy company executives so they can use them as political props, browbeat them, lecture them; I’d love for them to come in front of the Senate Energy Committee,” Barrasso told reporters yesterday. “We can hear from them firsthand about the ways that this administration has tied them up in red tape.”

That includes legislation from Sens. Mark Kelly (D-Ariz.) and Maggie Hassan (D-N.H.) to suspend the 18.3-cent-per-gallon federal gas tax for all of 2022 and a proposal from Sen. Sheldon Whitehouse (D-R.I.) and others to tax oil and gas profits and return them to consumers as a rebate.

“Four of them came out with a bill to do a gas tax holiday to lower rates by about 18 cents, which to me is just a Band-Aid on a bullet hole,” Barrasso said. “They put the bullet hole into the energy industry.”

The industry, too, has blamed Biden regulatory policies for depressing domestic oil and gas production, but most experts and observers say they are at most a minor factor.

In a survey of more than 100 oil and gas executives published yesterday by the Federal Reserve Bank of Dallas, 59 percent said pressure from investors is the primary reason major companies are restraining production growth, while fewer than 10 percent blamed government regulations.

Sen. Rob Portman (R-Ohio) turned his attention to Russia, pressuring Biden to produce tangible results during his visit to NATO allies in Europe this week, especially on forming a consensus on Russian oil bans.

“I hope that the president of the United States will talk to his NATO colleagues and make a very strong case that they need to embargo the Russian oil and gas also,” said Portman. “We can come up with all sorts of ways to take away most-favored-nation treatment. … But if we don’t deal with this issue, it’s going to be very, very difficult for the Ukrainian people to survive this conflict.”

Legislation removing the trade status of “most favored nation” for Russia over the invasion of Ukraine hit a roadblock yesterday, as Republicans fought for a measure to include a congressionally mandated ban on energy imports.