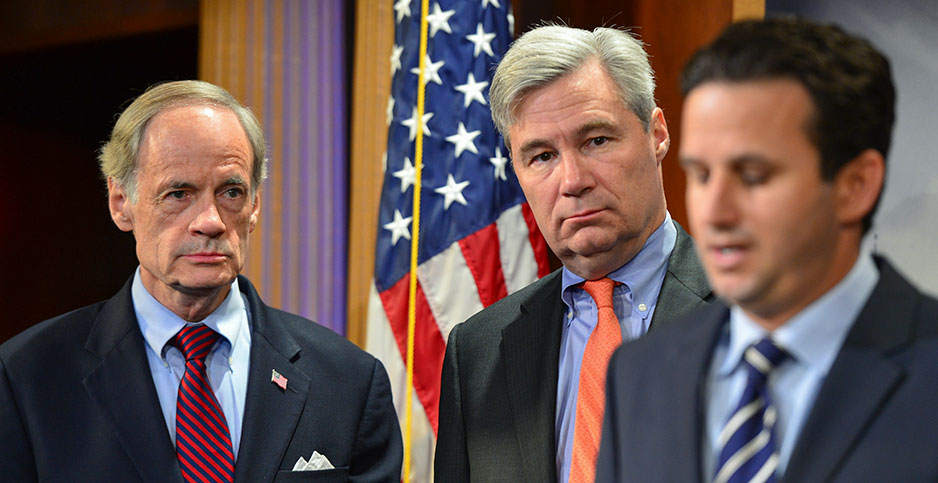 Sen. Sheldon Whitehouse (D-R.I.) (center) wants to include climate provisions in the president's assistance for industries struck by the COVID-19 virus. Senate Democrats/Flickr

Federal policymakers should consider climate change as part of any economic aid package for the pandemic caused by the novel coronavirus, say environmentalists and Democrats.

The demands follow talk by Trump administration officials and others of steering money toward several carbon-intensive industries that have been financially hurt by the global outbreak. Those include airlines, cruise lines and the fossil fuel sector.

"We’ve got to make sure we have a successful oil and gas industry," said Sen. Rick Scott (R-Fla.). He added that President Trump and Senate Republicans discussed a bailout for the fossil fuel industry during a meeting Tuesday on Capitol Hill.

The discussions have prompted pushback from lawmakers such as Sen. Sheldon Whitehouse. The Rhode Island Democrat said airlines in particular must do more to address their carbon footprint in return for federal financial assistance.

Airplanes remain one of the most carbon-intensive forms of travel. Aviation currently accounts for 2.5% of global greenhouse gas emissions. But that percentage is poised to shoot up in the coming decades, as airline passenger numbers are projected to double by 2037.

"If they want to bail out the airline industry, then the airline industry better damn well be ready to clean up its act in terms of carbon emissions offsets," Whitehouse said. "It can be done, they can do it, and the taxpayer should make sure they’re performing it."

The coronavirus pandemic has sent shock waves through the global economy. The Dow Jones Industrial Average dropped about 1,500 points yesterday — a 20% fall from its record highs. The energy stock market sector was one of the worst hit, and Boeing, the aviation manufacturer, dropped 10%.

The White House has yet to release details on its economic response to the global pandemic, but Trump previously has mentioned helping the airline and cruise industries — or doing nothing at all.

The president yesterday suggested to a group of banking executives that no stimulus would be needed if the coronavirus threat is "quickly" resolved.

"If we get rid of the problem quickly, everything solves itself; we don’t need stimulus," he said.

In a rare Oval Office address last night, Trump said he would ban all travel from Europe for the next 30 days, a move that would escalate pressure on the airline industry. He again tried to assure the nation that the coronavirus would pass quickly, even as scientists have cautioned a third or more of Americans could contract the virus.

"This is not a financial crisis," he said. "This is just a temporary moment in time that we will overcome as a nation and a world."

Critics have complained that Trump has struggled for weeks to grasp the severity of the outbreak. His comments were delivered not long after the World Health Organization officially declared COVID-19, the disease the novel coronavirus causes, a global pandemic.

Democrats this week said they are anticipating they’ll have some requests to insert into any aid package that comes before Congress — much in the same way that Republicans called for tax cuts in 2009 as part of the $900 billion economic stimulus package pushed by the Obama administration. Democrats used that same package to steer support toward green energy jobs and other economic incentives for the renewable energy industry.

It’s unclear, however, whether Trump and the Republican-controlled Senate even would consider climate as part of future stimulus negotiations.

Whitehouse said he would seek to include carbon offsets as part of any stimulus for carbon-intensive industries. Another potential ask: a "menu" of other climate actions, such as tax incentives for clean energy.

"There would be a menu: We’d probably want a tax extender; we’d want a price on carbon; we’d have a long, long list — and don’t even get me started on the cruise ships," Whitehouse said.

He isn’t the only climate advocate who would use a new stimulus package to address global warming. Sen. Ed Markey (D-Mass.) said now is the time to pass the Green New Deal, a sweeping climate policy he helped write.

"The White House is proposing to bail out the fossil fuel industry. We need more coronavirus testing, not more fracking. We should be working to pass a #GreenNewDeal and deliver climate justice, not delivering an unjust payout to Trump’s billionaire oil and gas cronies," he tweeted.

Activists with the Sunrise Movement, a youth-led group that has championed the Green New Deal, took a similar stance.

"Democrats can’t respond to this moment of crisis the same way we did in 2008, by bailing out CEOs and leaving millions of people unemployed and homeless," said Aracely Jimenez, a Sunrise Movement spokeswoman, in a statement.

Jimenez added: "The next President must instead respond to this moment of crisis by stimulating the economy through unprecedented investment in the Green New Deal — the only plan which will revamp our public health infrastructure, guarantee federal jobs to all displaced workers, and employ millions to transform our energy, transportation, and food systems towards renewable energies that stabilize both our economy and our climate."

A coalition of green groups, including Greenpeace, the Sierra Club and the Center for Biological Diversity, sent a letter yesterday to Senate and House leadership, stating that any relief package that includes help for the oil and gas industry "must be stopped at all costs."

"This time of climate crisis and economic peril calls for a forward-thinking approach that serves the people, not another bailout to prop up the dirty energy industry," the groups wrote. "If the federal government is going to use this moment to justify new spending, it should lift up vulnerable communities in this time of crisis, not corporations already receiving billions of our tax dollars."

Treasury Secretary Steven Mnuchin told lawmakers yesterday that the administration is weighing aid for the airline industry, which has seen ridership plummet amid the coronavirus outbreak.

In particular, Mnuchin said the White House is considering tax relief and loan guarantees for the industry, although he pushed back on the notion that this constitutes a "bailout."

"I want to be clear, this is not bailouts; we are not looking for bailouts," he said.

The International Air Transport Association, a trade group representing major airlines, estimated last week that the global industry could see between $63 billion and $113 billion in revenue losses this year.

"Airlines are doing their best to stay afloat as they perform the vital task of linking the world’s economies," Alexandre de Juniac, IATA’s director-general and CEO, said in a statement. "As governments look to stimulus measures, the airline industry will need consideration for relief on taxes, charges and slot allocation. These are extraordinary times."

Slot allocation refers to the practice of reserving a certain number of landing slots at each airport for each airline. It’s done under a "use or lose" policy, meaning that if airlines don’t use all their landing slots, they lose them the following year.

While a bailout for the airlines is an active discussion, at least one Senate Democrat made clear she would not support a bailout package for the energy industry.