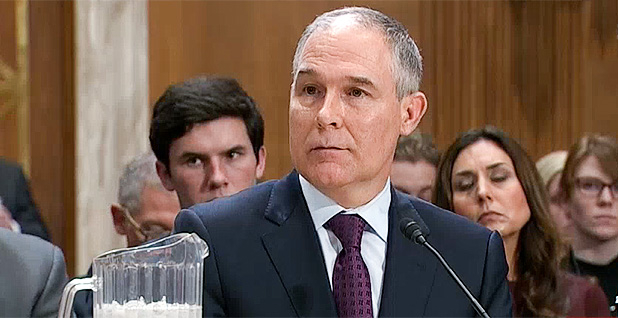 But Democrats and environmental advocates aren’t breathing any sighs of relief.

Although the Oklahoma attorney general has sued the federal government over its clean air and climate regulations more than a dozen times, he assured senators considering his confirmation as EPA administrator yesterday that he would adhere to court decisions finding that CO2 is dangerous to human health (E&E News PM, Jan. 18).

He also said he would abide by the limits of congressional statute, which he interprets as particularly narrow. As a leader in legal fights against Obama administration regulations, Pruitt is intimately familiar with the best shots at unwinding those rules and passing court muster or at least delaying action for as long as possible.

Pruitt acknowledged before the Senate Environment and Public Works Committee that "science tells us that climate is changing and that human activity in some manner impacts that change."

He added that "the ability to measure with precision the degree and extent of that impact and what to do about it are subject to continuing debate and dialogue, and well it should be."

Later in the hearing, Sen. Bernie Sanders (I-Vt.) scoffed when Pruitt said his personal opinion on climate change is "immaterial" and that the EPA administrator is "constrained by statute."

In distancing himself from the radical declarations made by Trump calling climate change a "hoax" yet raising questions about the established science connecting man-made emissions to warming, Pruitt’s statements hew closely to those of other Cabinet nominees. Last week, Rex Tillerson, the former Exxon Mobil Corp. CEO picked to head the State Department, said climate change is real, but the ability to predict the effect of greenhouse gases is "very limited."

Former GOP White House counsel C. Boyden Gray, who has spoken on behalf of Trump’s transition team, said he thinks the nominees’ stances show Trump has backed away from his position that climate change is a hoax.

Delware Sen. Tom Carper, the ranking Democrat on the committee, however, told reporters he wasn’t convinced Pruitt "relies on science all that much," particularly in disagreeing with the majority of scientists who are certain climate change requires quick action.

Pruitt’s nomination has enraged environmental advocates, many of whom showed up at the hearing donning pink hats with cat ears, which protesters will wear at a women’s march against Trump on Saturday. Coal miners wearing hard hats and delighted by the choice of Pruitt also made an appearance to voice their support.

Democrats have little chance of stopping Pruitt from getting the votes he needs to be confirmed. Carper, though, vowed to put up a fight, quoting hockey player Wayne Gretzky’s famous quote, "You miss 100 percent of the shots you don’t take."

Aside from dinging Pruitt on climate science, Democrats spent much of the day trying to pin the nominee down on whether he solicited "dark money" from the energy industry in exchange for challenging environmental standards (see related story).

Sen. Sheldon Whitehouse (D-R.I.) asked whether Pruitt in his leadership roles with the Republican Attorneys General Association asked companies to contribute to the group’s Rule of Law Defense Fund, a nonprofit that is not required to disclose donors.

Sen. Jeff Merkley (D-Ore.) questioned Pruitt about a letter he sent objecting to federal efforts to limit methane leaks from oil and gas companies. Reports in publications including The New York Times show that the letter was largely written by Oklahoma’s Devon Energy Corp. and signed by Pruitt.

Pruitt defended himself, saying that "the efforts I took as attorney general were representing the interest of the people of the state of Oklahoma." He said he consulted state environmental officials about the issue.

Pruitt added that the letter represented an entire industry vital to Oklahoma, not a particular company.

Later on, Sen. Jim Inhofe (R-Okla.) noted that "the oil industry is a huge industry in my state of Oklahoma" and said middle-income people donate to campaign funds to support candidates who help the industry. He then questioned whether Tom Steyer, an environmentalist who contributes to Democratic candidates, has an outsized influence in campaigns.

Steyer shot back in Twitter and in an emailed statement that his contributions are transparent and in the public interest.

‘I need you to care about human health’

Following the hearing, Oklahoma Democratic Party Chairman Mark Hammons said Pruitt failed to "show basic transparency" in reporting the amount of money his office spent on outside counsel, and the justification for why outside counsel was necessary.

Senate Democrats also pushed Pruitt on whether he would acknowledge the health impacts of air pollution, in addition to regulatory costs to businesses. Responding to a question from Sen. Cory Booker (D-N.J.), Pruitt admitted he didn’t know how many children in Oklahoma have asthma.

In an impassioned plea, Sen. Kirsten Gillibrand (D-N.Y.) pushed Pruitt to explain what he would do to reduce the dangers from mercury emissions from coal plants if he believes previous regulations have been too costly.

"I need you to care about human health and really believe that the cost when human health is at risk, when people are dying, is far higher than is the cost to that polluter to clean up the air," Gillibrand said. "I need you to feel it as if your children sitting behind you are the ones in the emergency room. I need you to know it."

Pruitt and the Republican senators who support him maintained that he would protect clean air and water while following the congressional intent of federal law. He said he will collaborate with states and let them make the big decisions (Climatewire, Jan. 18). Inhofe said Pruitt has earned a reputation as a leader in defending the "rule of law," a phrase used often yesterday.

Some lawmakers pressured Pruitt to commit to lifting or intensifying certain regulations or recusing himself from handling lawsuits he has brought against EPA. But over many hours, he made few promises. He calmly navigated political landmines, sitting alone at a long wooden table and sipping from a large cup of coffee as big-name surrogates sent by the Trump transition team sat behind him. After the hearing, Pruitt shook hands and slapped backs with GOP senators but also bade a warm farewell to Booker, even after the two tussled on several points.

Pruitt’s nomination has been a lightning rod within the environmental movement, spurring fundraising and prompting hundreds of groups to rally against him.

Yesterday, many of those opposed to Pruitt wore white face masks and stickers emblazoned with the words "Stop Pruitt." A few who rushed into the room and disrupted the hearing were led away by police with hands secured behind their back with white zip ties.

"We want to let our presence be known that we think Scott Pruitt is a terrible pick for EPA, considering he is also in a lawsuit with EPA right now. And we think he won’t represent our best interest in the environment, our food or our water," said Rebecca Wolf, a protester standing near the entrance to the hearing.

Volunteer organizer, Rachel Goldstein, estimated that about 200 people from environmental groups such as 350.org and the Sierra Club had shown up at the Dirksen Senate Office Building to protest the nominee.

"I think Pruitt as a pick for EPA, and pretty much every Trump nominee, has outraged many of my friends and family who haven’t gotten involved in politics and climate activism: the outrage and embarrassment, and it’s activated a lot of people to fight back," said Sara Shor, manager of the keep-it-in-the-ground campaign against fossil fuels for the group 350.org.

Twenty coal miners, clustered in groups of four or five, also waited outside, hoping for a seat at the hearing.

Coal-state conservatives see Trump’s election and Pruitt’s nomination to lead EPA as a Hail Mary pass for the crippled coal industry. In an interview earlier this week, West Virginia Attorney General Patrick Morrisey (R) said he hopes a policy reversal could bring some mining jobs back to his state. Data from the U.S. Energy Information Administration, however, predict that without climate standards for coal plants, coal mining will recover only modestly and only in the West, not in Appalachia.

Still, some miners traveled for hours to cheer on Pruitt.

"This is really out of my wheelhouse," said John Yankovich, a miner who works for Ohio County Coal Co., which is owned by Murray Energy Corp. Attending the hearing was his first time visiting Washington.

"We came up to support the Pruitt hearing, basically because he is going to be a voice for us," Yankovich said. "He’s going to make decisions that will stop the decimation of West Virginia, that has been creeping up in Pennsylvania and Ohio."