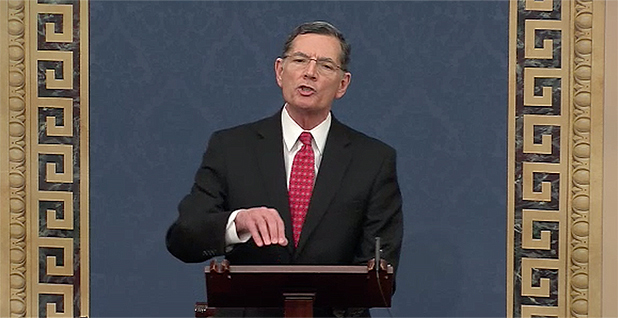 Environmentalists and some of their Democratic allies in Congress see economic stimulus discussions stemming from the novel coronavirus as a major opportunity to push their green priorities.

But their efforts are running headfirst into the ghosts of the Green New Deal and Republicans’ efforts to gin up opposition by comparing any environmental policy proposals to the divisive progressive plan.

"[Sen.] Bernie Sanders [I-Vt.] may have lost to [former Vice President] Joe Biden, but the Green New Deal of Bernie Sanders and [Sen.} Elizabeth Warren [D-Mass.] and that entire crew is alive and well in the Democratic cloakroom and is controlling the actions today on the floor of the United States Senate," Sen. John Barrasso (R-Wyo.) said in a fiery floor speech yesterday.

Amid congressional debates over how to pull the country out of what could be a deep recession caused by the virus and responses to it, clean energy industries and environmentalists during the past week have been pushing investments in renewable energy and emissions cuts as a potentially sizable driver of jobs and economic activity.

"Whether for the airline, cruise line, vehicle manufacturing, or other industries, Congress should require and encourage larger steps towards clean energy use, energy efficiency, a carbon price or verified offsets, and air and water pollution reductions that would mitigate in line with scientific recommendations both climate change and environmental injustice," more than a dozen environmental groups wrote to congressional leaders Friday.

Those pleas and others had at least some resonance in Congress. Democrats on the Select Committee on the Climate Crisis and the Sustainable Energy and Environment Coalition wrote open letters of their own to leaders seeking some help for clean energy, like extending some deadlines for tax credits.

‘Are you kidding me?’

The GOP, eager to either head off or minimize economic catastrophe, quickly used the vote to paint Democrats as not just obstructing vital relief, but doing so in the name of the Green New Deal, the aggressive decarbonization and economic transformation plan pushed by Rep. Alexandria Ocasio-Cortez (D-N.Y.), Sen. Ed Markey (D-Mass.), Sanders and many other Democrats who ran for president.

"Here are some of the items on the Democratic wish list over which they chose to block this legislation last night: tax deductions to solar energy and wind energy; provisions to force employers to give special new treatment to big labor; and, listen to this, new emissions standards for the airlines," McConnell said on the floor. "Are you kidding me?

"Democrats won’t let us fund hospitals or save small businesses unless they get to dust off the Green New Deal," he declared.

A Democratic aide told E&E News that the party was pushing for some clean energy assistance in the legislation, as well as requiring airlines that get federal assistance under the bill to offset their greenhouse gas emissions.

The aide reasoned that if the legislation included money to buy oil for the Strategic Petroleum Reserve and to help airlines, it’s a reasonable trade-off to help clean energy and reduce emissions.

That’s a far cry from the Green New Deal, which has provisions targeting rapid decarbonization of electricity, transportation, buildings, industry, agriculture and more.

But like the GOP’s frequent lofty accusations that the Green New Deal seeks to eliminate cows, airplanes and private cars, that seems to matter little in the political rhetoric.

Republicans seem to have calculated that the Green New Deal is an effective tool for turning public opinion against their opponents, amid reports that Democrats are seeking to insert other policies the GOP objects to.

These would include new labor organizing protections, diversity requirements for corporate boards and new federal mandates for election access.

They’re putting the blame squarely on Pelosi, who is pushing a separate Democratic economic measure.

"Yesterday, the speaker of the House showed up with an agenda, and all of a sudden it got taken over at the leadership level," Senate Majority Whip John Thune (R-S.D.) said during a tense exchange between the parties on the Senate floor.

"Now, instead of talking about helping workers, we’re talking about the Green New Deal and all kinds of other things, demands that the unions and other special interest groups want to see in this deal."

Barrasso, chairman of the Environment and Public Works Committee, said whether to extend solar and wind tax credits is "a debate that’s worthy of being held, but not on this bill today."

"That’s not going to help one person who’s having problems breathing to get a respirator that they need," he added.

Sen. Joe Manchin of West Virginia, one of the few Democrats to vote "no" on the Green New Deal resolution on the floor last year, also used it to note his broader opposition to the Republican stimulus package.

The problem Democrats have with the bill is that there isn’t enough transparency for companies getting government funds, Manchin said.

"Who’s throwing that stuff in, I have no idea," he added. "But I can guarantee I wouldn’t vote for it."

Some observers saw McConnell’s Green New Deal messaging as purely political, even if House Democrats are eyeing some environmental provisions in their own stimulus proposal. And indeed, Schumer has not mentioned clean energy or climate issues publicly as a priority in negotiations.

"McConnell’s contention that somehow climate change was holding up the bill is a stalking horse tactic by the Republicans, who are trying to use climate issues to deflect attention from more serious problems in the bill, like inadequate worker and health care protections," said Paul Bledsoe, a former climate adviser in the Clinton White House.

"That bothered me because there’s no way the entire package is being held up by climate-related issues alone," he said.

Bledsoe said it’s not surprising to see Democrats pushing for compromises from industries getting government cash in the stimulus bill.

The House Democratic version of the bill, for example, included a provision to require airlines getting government funds to offset their carbon emissions.

Heather Reams, executive director of the right-leaning clean energy advocacy group Citizens for Responsible Energy Solutions, lamented how polarizing both the economic measure and the tax credits for renewable energy — which she supports — have become.

"It’s unfortunate that we’ve gotten tribal with the value of these tax credits for clean energy," said Reams.

"The politics are really taking over. I don’t think anyone wants that," she said. "Wind and solar have broad bipartisan support, except when it’s holding up a really big spending package to help struggling American families."

Reams said she’s pushing for the clean energy provisions, but as part of an additional, separate measure, which would be Congress’ fourth response to the crisis. But the GOP’s Green New Deal rhetoric could add big hurdles to even that kind of request.

In a move that might not help Democrats win the argument, a team of advocates who were involved in the creation of the progressive plan released their vision yesterday for a $2 trillion "green stimulus" that included concepts like boosting clean energy program funding and setting a national clean electricity standard (Greenwire, March 23).

The idea is to accomplish some of the Green New Deal’s goals as part of a major stimulus package Congress could start implementing.

"This is a moment when a ton of the preparatory paperwork can get done, regulatory changes, bridge loans, financial measures can be taken, so that when people are ready to get back to work, the best projects are shovel ready," Daniel Aldana Cohen, one of the plan’s authors and a sociology professor at the University of Pennsylvania, told E&E News.

Cohen acknowledged that the touchy politics surrounding the Green New Deal were part of the calculation behind the stimulus effort.

"There are people in Congress who don’t love the phrase Green New Deal, and we don’t want that to be a problem," he said. "We see this as a pragmatic thing, and we want to get as much of this done as possible."

But in a sign of where the GOP sees politics on the Democrats’ requests, the National Republican Congressional Committee thinks the holdup is good news on the election campaign front.

The committee yesterday slammed a number of House Democrats who are vulnerable in November elections over the matter, including Reps. Abigail Spanberger of Virginia, Debbie Mucarsel-Powell of Florida and Conor Lamb of Pennsylvania.

"Instead of delivering quick relief for Americans in need, Nancy Pelosi and Democrats are blocking the life-saving coronavirus stimulus legislation to add in a host of unrelated progressive items, including fuel standards for airlines, labor union handouts and wind and solar tax credits," NRCC spokesman Michael McAdams said in a statement on Lamb, similar to ones the organization wrote for other Democrats.

"Will Lamb condemn Pelosi’s partisan stunt that is putting Pennsylvanians’ lives at risk?" he asked.

Marc Lotter, director of strategic communications for President Trump’s reelection campaign, joined in on Twitter, calling it "OUTRAGEOUS" that Democrats would "put radical Green New Deal ahead of the needs of American workers!"