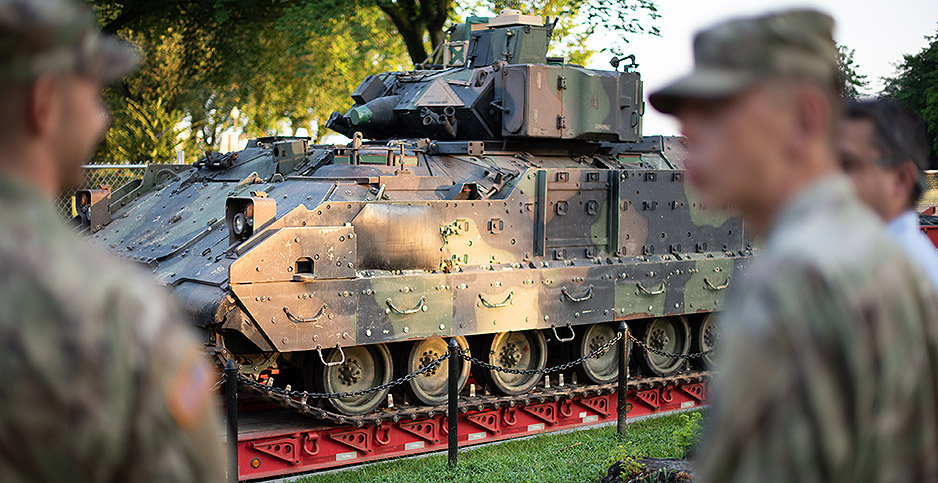 Members of the military this morning stand with two M2 Bradley Infantry Fighting Vehicles near the Lincoln Memorial in Washington. Graeme Sloan/Sipa USA/Newscom

The National Park Service is under fierce attack following revelations the agency diverted $2.5 million of its entrance and recreation fees to pay for President Trump’s Fourth of July military bash.

As tanks rolled onto the National Mall to prepare for the event, members of Congress and park advocates reacted angrily to news that the agency had tapped money normally used for park projects to help pay for the extravaganza.

"This is beyond the pale," said Sen. Tom Udall (D-N.M.), the ranking member of the Senate Interior, Environment and Related Agencies Appropriations Subcommittee. "The American people pay these fees to make improvements at our national parks, not to boost President Trump’s campaign."

Expressing similar dismay, Rep. Betty McCollum, chairwoman of the House Interior-Environment Appropriations Subcommittee, said "it is unbelievable that Congress — specifically the Appropriations Committee — was not informed of this use of taxpayer dollars" in advance.

"Mr. Trump’s event is on federal grounds," the Minnesota Democrat said this morning. "The National Mall belongs to all of us. … This administration needs to be reminded that the power of the purse belongs to Congress."

As public anger intensified over the growing political nature of the holiday celebration, the park service said it had already been warned the event could include disruptions.

Many of the president’s donors and backers have received VIP tickets to be near the president when he gives a speech at the Lincoln Memorial tomorrow evening, while protesters who plan to bring a "Baby Trump" blimp will be kept at a distance, out of the president’s line of sight.

In a permit for the demonstration, park service officials said the protest could include speeches and an open microphone, poetry readings, and a male bathing suit contest.

"Permittee has indicated that MAGA (Make America Great Again) presidential supporters may attempt to disrupt the activity," NPS officials said in the permit.

No one is more excited about Trump’s "Salute to America" than the president himself, who this morning said the event "is looking to be really big."

"It will be the show of a lifetime!" Trump wrote on Twitter.

The show is expected to include military flyovers, music, the longest and largest fireworks in Washington’s history, and a display of tanks to put a spotlight on the nation’s military muscle.

"We have the greatest military in the world. Not bad!" Trump said in another tweet this morning.

Citing anonymous sources, The Washington Post reported last night that NPS and the White House were still negotiating the possibility of projecting an image from the 1969 Apollo moon mission onto the Washington Monument to add more sizzle to the show. Some feared the monument could be damaged by such a display, while others worried the tanks and military equipment would damage the National Mall grounds.

In its report, the Post said NPS was siphoning money normally used for park improvements to help finance the elaborate show. The news immediately dominated the evening’s cable news shows, which showed images of tanks arriving by trucks and railroad cars to prepare for the show. Two M2 Bradley Infantry Fighting Vehicles were already being set up on grass near the Lincoln Memorial this morning, protected by military personnel.

On Capitol Hill, officials said the agency’s unprecedented decision to use national park fee money for such a show would only complicate efforts on Capitol Hill to increase the NPS 2020 budget to help reduce a $12 billion backlog of repairs.

Phil Francis, a former park superintendent and the current chairman of the Coalition to Protect America’s National Parks, called the move "clearly a breach of trust with the 300 million plus visitors who enjoy their national parks each year."

"For years, the NPS has assured paying visitors that their fees would be used to protect and maintain their parks and that is particularly important now … due to lean budgets," he said. "The fee monies do not represent some type of slush fund to pay for political expediency. This is outrageous."

Emily Douce, director of operations and park funding for the National Parks Conservation Association, said the fee revenues were designed to pay for educational programs for visitors and maintenance projects, never for presidential events.

"The reallocated money is equivalent to more than half of the fees the National Mall retains for projects and programs in one year," she said.

Interior Secretary David Bernhardt, who was tapped by Trump to coordinate the Fourth of July event, is certain to face a grilling from lawmakers, who have grown increasingly upset over his decision this year to allow different uses for fee money raised under the Federal Lands Recreation Enhancement Act.

In January, at the height of the partial government shutdown, Bernhardt allowed parks to use their fee money to pick up trash and clean toilets as a way to keep them open. And in May, he drew more criticism for signing off on a new policy that allowed parks to begin using the money to pay for day-to-day expenses instead of projects.

While many Democrats say that’s not what Congress intended, NPS and Interior officials say the federal law can be more broadly interpreted.

Del. Eleanor Holmes Norton (D-D.C.) said this morning that Washington, D.C., residents are getting particularly hard hit with the president’s political shows, noting the district has yet to be paid $7.3 million for Trump’s 2017 presidential inauguration. She accused the president of now turning a nonpartisan national holiday "into a partisan political rally financed by American taxpayers."

"Beyond funneling taxpayer dollars into his own private business, the president is all but auctioning off the best seats on the National Mall to his biggest donors," she said.

Meanwhile, officials at both NPS and Interior declined to comment or offer any explanation, but they did not deny the reports.

And as he ignored the political firestorm, Bernhardt did pause to issue a brief statement on the holiday itself.

"Have a happy and safe Independence Day and God bless America!" he said.