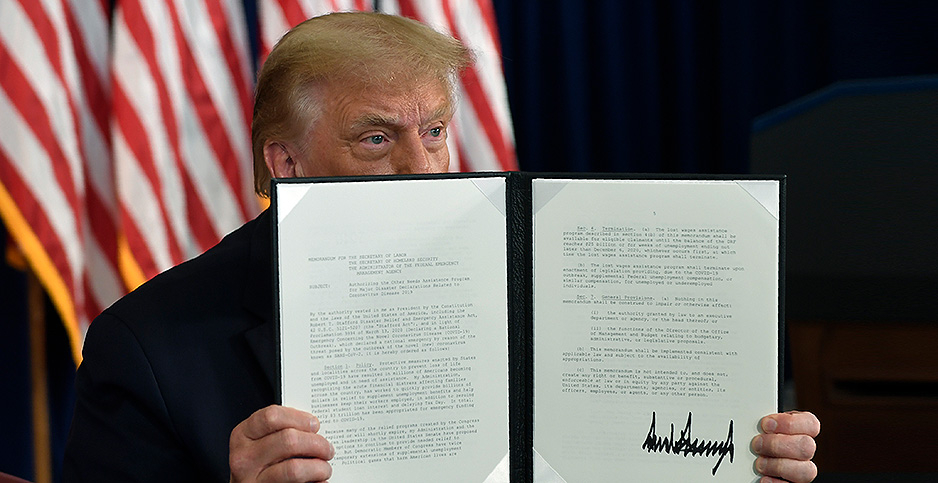 President Trump signed executive orders over the weekend after talks between the White House and Congress on COVID-19 relief collapsed. Susan Walsh/Associated Press

Top Democrats and some Republicans are calling for the White House to resume negotiations on COVID-19 relief, after President Trump roiled talks over the weekend with a series of executive orders intended to address some of the pandemic’s economic fallout.

In appearances yesterday on Sunday news shows, House Speaker Nancy Pelosi (D-Calif.) said the orders, signed Saturday at the Trump National Golf Club in Bedminster, N.J., are legally dubious and will do little to help the millions of unemployed Americans who face the loss of enhanced unemployment benefits as well as evictions after a federal moratorium on the practice expired last month.

"These are illusions," Pelosi said on "Fox News Sunday" of Trump’s executive actions, which aim to extend the eviction moratorium and enhanced unemployment benefits, and to suspend the payroll tax and collection of student loan debt.

For instance, Pelosi noted that Trump’s eviction order calls on the Department of Health and Human Services and the Centers for Disease Control and Prevention to weigh whether evictions should be temporarily halted.

"While it has the illusion of saying, ‘We’re going to have a moratorium on evictions,’ it says, ‘I’m going to ask the folks in charge to study if that’s feasible,’" Pelosi said on Fox News.

"Unfortunately, the president’s executive orders, described in one word, could be paltry," Schumer said. "In three words, unworkable, weak and far too narrow."

He slammed Trump’s order to extend the expired enhanced unemployment benefits at a reduced rate. The expired payments of $600 a week approved by Congress would drop to $400. States would have to contribute one-quarter of the benefit.

"This is an unworkable plan," Schumer said. "Most states will take months to implement it, because it’s brand-new, it’s sort of put together with spit and paste. And many states, because they have to chip in $100 and they don’t have money, won’t do it."

Schumer also slammed Trump for tapping $44 billion in Federal Emergency Management Agency disaster relief funds to pay for the unemployment extension, which he noted comes "when we’re at the height of hurricane season."

What’s on the table

In announcing the orders Saturday, Trump slammed Pelosi and Schumer for holding "vital assistance hostage on behalf of very extreme partisan demands and the radical-left Democrats, and we just can’t do that."

He left the door open for future talks but said in the meantime that he would take executive action that "will take care of, pretty much, this entire situation."

Schumer and Pelosi hotly disputed the president’s assertion, noting that the orders do not address COVID-19 testing, funds to help schools reopen safely or any additional money for struggling states and local governments.

Although the House passed a $1.5 trillion green infrastructure package that includes a sweeping clean energy tax title, those provisions have not been in the mix of current talks.

Also left out is another round of direct payments for individuals and additional funds for the popular small-business lending program known as the Paycheck Protection Program — both of which were included in Senate Republicans’ $1 trillion relief offering.

"We said come back when you want to put up some more money," Pelosi said on CNN’s "State of the Union" yesterday.

Schumer said he and Pelosi had offered to come down from the $3.4 trillion they have been seeking in ongoing talks with the administration, but Treasury Secretary Steven Mnuchin and White House chief of staff Mark Meadows on Friday flatly refused their offer to "meet in the middle" by reducing their ask by more than $1 trillion.

"They said absolutely not," Schumer recounted yesterday. "I said to them, ‘This means it’s your way or the highway?’ And they basically said, ‘Yes.’ That is not the way to create a deal."

Speaking after Pelosi on "Fox News Sunday," Mnuchin disputed Democrats’ descriptions of the talks, blaming Pelosi and Schumer for not yielding on their demand for $1 trillion for state and local governments, as well as continuing the $600-a-week enhanced jobless benefits.

"Those two issues, they’ve refused any compromise. On mostly every single other issue we’ve reached an agreement," Mnuchin said.

He also said he was willing to resume talks. "I’ve told the speaker and Senator Schumer, anytime they have a new proposal, I’m willing to listen."

On CNN, Pelosi indicated that "we have to" go back to the table to resume negotiations, adding, "There is room for compromise, but you have to see the entire package."

She also said she is determined not to let COVID-19 relief and spending talks merge ahead of the Sept. 30 expiration of the current fiscal year.

"These are two separate issues," she said.

Trump’s executive steps were praised by House and Senate GOP leaders, who have not been part of the negotiations between Democrats and the administration.

"Since Democrats have sabotaged backroom talks with absurd demands that would not help working people, I support President Trump exploring his options to get unemployment benefits and other relief to the people who need them the most."

"What President Trump did, he really showed he was the one person in the room that put people before politics," McCarthy said.

But there were GOP gripes also, including from Susan Collins of Maine, who is facing a tough reelection fight to hold on to her Senate seat in November.

In a statement, Collins said she hoped Trump’s actions would prompt Democrats to "negotiate seriously" on more pandemic aid, including the expiration of the Paycheck Protection Program over the weekend, which "cannot be extended by executive order."

"Congress must act quickly," Collins said. "There are constitutional limits on what the president can do to help through executive orders."

House Ways and Means Chairman Richard Neal (D-Mass.) also seized on Trump’s deferral of the payroll tax. The president said he would forgive payroll taxes and make the cuts permanent if he wins reelection on Nov. 3.

"This decree is a poorly disguised first step in an effort to fully dismantle these vital programs by executive fiat," Neal said.

Schumer sidestepped questions yesterday about the legality of Trump’s actions, which are expected to generate legal challenges.

But Pelosi said she agreed with Sasse’s assessment yesterday. "My constitutional advisers tell me they’re absurdly unconstitutional," she said on CNN.