Democrats, greens see some benefit as Pruitt hangs on 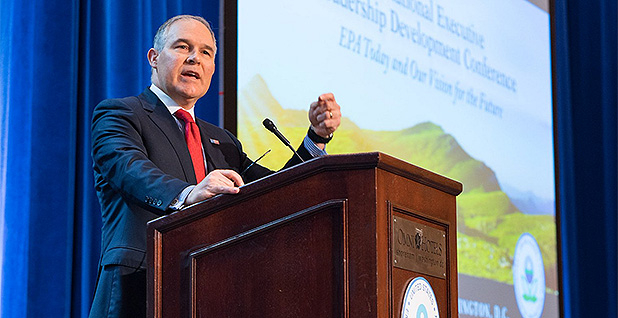 But Lieu’s mocking message yesterday also made a serious point that even as Democrats and environmental groups are calling for Pruitt’s ouster, they are benefiting politically from his woes, too.

Pruitt has become the poster boy for Democrats eager to highlight unethical actions in the Trump team and a way for politicians and green groups to rally ahead of the November midterm elections.

While it’s hardly a surprise that the liberal stalwart has called for him to be fired, Pelosi’s remarks show how Democrats see value in tying him to the White House.

"The president has appropriated that — that term of art, ‘drain the swamp,’ and what does he do but have an administration that is wallowing in it," said Pelosi, noting Democrats won control of the House in 2006 with their own drain-the-swamp mantra. She suggested a similar strategy could work this fall.

In the Senate, Democrats turned a floor debate yesterday over the confirmation of Andrew Wheeler for EPA’s deputy administrator into a forum to bash Pruitt.

Sen. Tom Carper of Delaware, the top Democrat on the Environment and Public Works Committee, read several newspaper editorials with the swamp metaphor, including one portraying the EPA boss as a "creature of the black lagoon."

Earlier this week, Sen. Tom Udall (D-N.M.) held a Capitol Hill press conference to outline his plans for pushing a congressional resolution of disapproval of Pruitt.

It’s unlikely the resolution will ever come up, but it was a way to appeal to green groups. Several were on hand to lend support, including the League of Conservation Voters and Moms Clean Air Force.

Organizers eager to elect Democrats in the November midterm elections have taken to social media in recent days, embracing Pruitt’s misdeeds as another reason to turn to the left.

Twitter handles like "Blue Wave" and "BlueWave2018" are retweeting damaging stories, while others blame the agency head for galvanizing Democratic support, inducing messages like "Keep Scott Pruitt! You’re only making the #BlueWave turn into a #Tsunami."

Democratic strategists have noted the attention.

David Di Martino, a partner at Blue Engine Message & Media and a consultant for a coalition of environmental groups that opposed Pruitt’s nomination, noted in a memo to interested parties that industry-supported hashtag #StandUpForScottPruitt had attracted only hundreds of mentions

In comparison, the opposing "Boot Pruitt" campaign launched on March 28 — around the time when details were revealed about Pruitt’s rental of a condo in Washington, D.C., tied to a lobbyist — had pulled in tens of thousands of new mentions.

"It seems that much like within the White House, Pruitt has few defenders willing to stick up for him publicly," Di Martino wrote.

Nate Lerner, the grass-roots director of Build the Wave, a progressive organization that connects volunteers and donors with campaigns, said, "Objectively, I want to see Pruitt go because of the damage he’s done to the environment and at the EPA, but there is a benefit to him staying.

"He serves as a punching bag for Democrats and as the face of the misuse of funds and corruption in the Trump administration," he said.

Lerner pointed to Trump’s use of social media to talk directly to his base as an example of how Democrats and green groups can also use it to appeal to environmentally minded voters about Pruitt.

The left’s coalescing to rally against Pruitt hasn’t been lost on the embattled administrator’s boosters, who say they’re winning where it counts.

Tom Pyle, head of the conservative think tank Institute for Energy Research who’s shoring up support for Pruitt, said Trump sees through the "smokescreen" the environmental left and Democrats are putting up to try to derail the administrator.

Trump has voiced support for the "great job" Pruitt is doing delivering on regulatory rollbacks, which the president said has generated savings on par with recent tax reforms.

"The environmental left and the disgruntled career staff at the EPA would like nothing more than to keep the drumbeat of controversy going to try and derail Administrator Pruitt because he is effectively delivering President Trump’s reforms," Pyle said.

When asked earlier this week about any broader political effects of the controversies surrounding the embattled head of EPA, Sen. Lisa Murkowski (R-Alaska), chairwoman of the Senate Energy and Natural Resources Committee, said no one wins.

"I don’t know that it gives anybody a boost," the senator said. "What I’ve said is that when things come up like this, they distract from the mission of the agency. The EPA has a lot to do, the administrator has a lot to do."