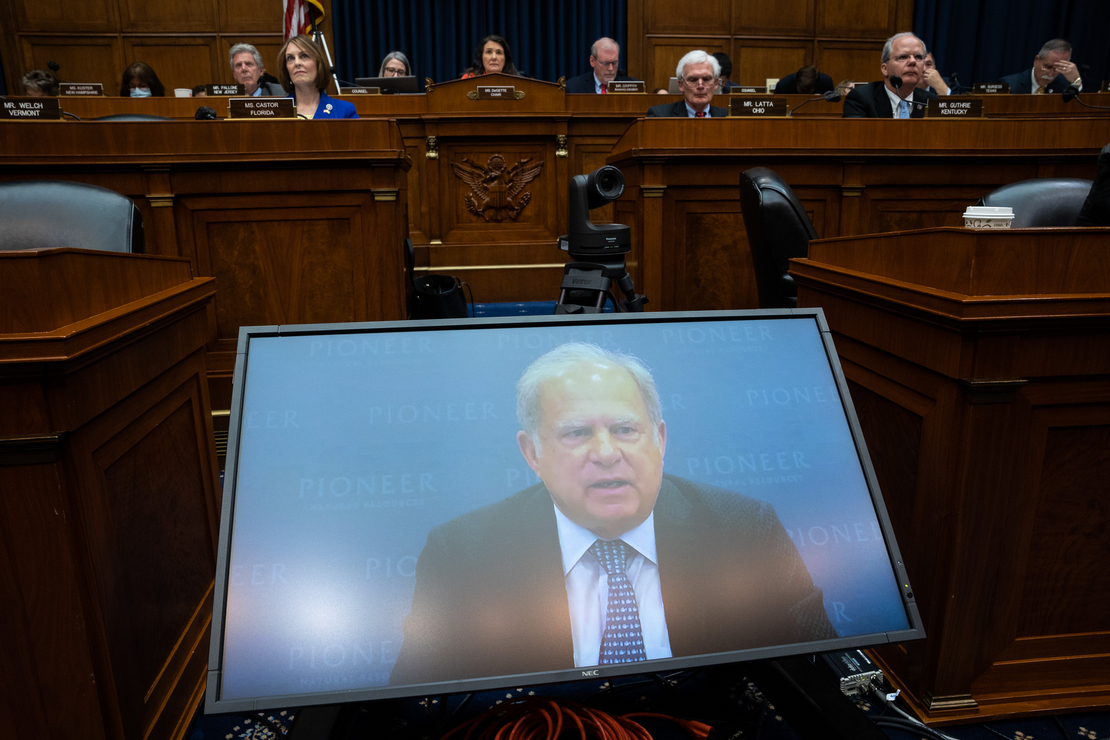 Lawmakers grilled Big Oil executives about their profits and production this morning during a high-profile House hearing, continuing the intense partisan back-and-forth over retail gas prices as the midterms approach.

Democrats on the Energy and Commerce Subcommittee on Oversight and Investigations probed top executives from Exxon Mobil Corp., Chevron Corp., BP America Inc., Shell USA Inc., Devon Energy Corp. and Pioneer Natural Resources Co. about prices at the pump, which remained over $4 per gallon nationally as of this morning.

“It’s often stated that oil is a global commodity and its price is determined by the global marketplace. We don’t dispute that,” said subcommittee Chair Diana DeGette (D-Colo.). “But the price of oil, alone, is not what’s alarming most of us on this panel. It’s the price at the pump.”

The political fireworks were relatively muted, and lawmakers on both sides of the aisle recited talking points they’ve kicked around for weeks. The hearing was nonetheless the biggest forum yet for Democrats’ crusade to go after the oil industry and reduce gas prices ahead of the midterms — and for the GOP’s efforts to blame President Joe Biden. But it also showed how little federal policymakers might be able to do in the near term to reduce prices.

All six executives invited to testify repeatedly denied under oath that they are capitalizing on Russia’s invasion of Ukraine to gouge consumers at the pump. They also noted that they do not control the price of their products, which is set by a global commodity market, and that they, for the most part, do not own or operate retail gasoline stations.

“We do not control the market price of crude oil or natural gas, nor of refined products like gasoline and diesel fuel, and we have no tolerance for price gouging,” Chevron CEO Michael Wirth told the panel.

Democrats, however, pointed to the industry’s record profits last year as evidence for allegations that oil companies are raking in cash and returning it to shareholders with little regard for consumers. Collectively, their profits were more than $75 billion last year.

Exxon also said this week it could see its highest profits in a decade as a result of high crude oil prices. The company in a filing said it could see some $11 billion in income in the first quarter of 2022, compared with $8.9 billion in the last three months of 2021 (Energywire, April 5).

Several companies, under questioning from full Energy and Commerce Chair Frank Pallone (D-N.J.), noted that they had lost money during the historic price crash in 2020 spurred on by Covid-19 and a price war between Russia and OPEC.

Pallone also asked each executive if they would increase production and decrease stock buybacks and dividends.

Every company said it planned to increase production. But on nixing shareholder returns, the executives all gave some version of “no.”

Pioneer CEO Scott Sheffield and Devon CEO Richard Muncrief both explicitly said they would not reduce buybacks or dividends. David Lawler of BP said he “can’t commit to a reduction in buybacks and dividends.” Others danced around the question and said they can do both.

“It’s unfortunate that many of you are saying you’re not going to address the increased buybacks and more dividends to your shareholders because I think that should be part of what you should do,” Pallone said.

The hearing, on the whole, painted a picture of political contrasts in the tumultuous pre-midterm environment.

Democrats, who for years have emphasized climate action and sought to reduce the industry’s influence, essentially sought to see the companies increase domestic oil supply.

Pallone called for “21st-century all of the above policies” to tackle energy prices and eventually transition to clean energy.

Meanwhile, Republicans, as they have for weeks, pinned the blame on Biden administration policies for the oil price spike.

“When President Biden points to Vladimir Putin or Big Oil or other scapegoats as the culprit, I’m reminded of the words of the Wizard of Oz: ‘Pay no attention to that man standing behind the curtain,'” said subcommittee ranking member Morgan Griffith (R-Va.). “Rather than deflect blame, President Biden should consider his own culpability for higher energy prices.”

And yet the companies that testified emphasized that they are, in fact, boosting production. While some executives said federal anti-drilling policies can send negative production signals to the industry, companies are also facing economic constraints.

Muncrief of Devon told the panel his company is producing at record levels in the United States. Exxon CEO Darren Woods said the company expects to increase production in the Permian Basin 25 percent over 2021 after boosting it 25 percent last year compared with 2020.

Sheffield, the Pioneer CEO, also said the industry as a whole had “overspent and overborrowed” during the shale boom, leading to “dismal” returns on Wall Street.

“It became abundantly clear that for the industry to survive, the model of production growth at any cost needed to change,” Sheffield said.

Now, the industry is facing labor shortages after three downturns over 12 years, lacking access to capital and cost inflation for supplies, Sheffield said. “Given these constraints it would take 18 to 24 months to add any meaningful incremental production,” he added.

All six executives appeared remotely amid continued Covid-19 protocols on Capitol Hill, reducing the opportunity for political spectacle. Most lawmakers spoke in person from the dais over an empty witness table, while the executives appeared on screens around the room as they spoke.

In one testy exchange, Rep. Billy Long (R-Mo.) asked DeGette whether they had been invited to appear in person.

“In fact, Mr. Long, I encouraged the witnesses to come in person,” DeGette said. “I wanted them here in person. The witnesses opted themselves to testify remotely. That was their decision.”